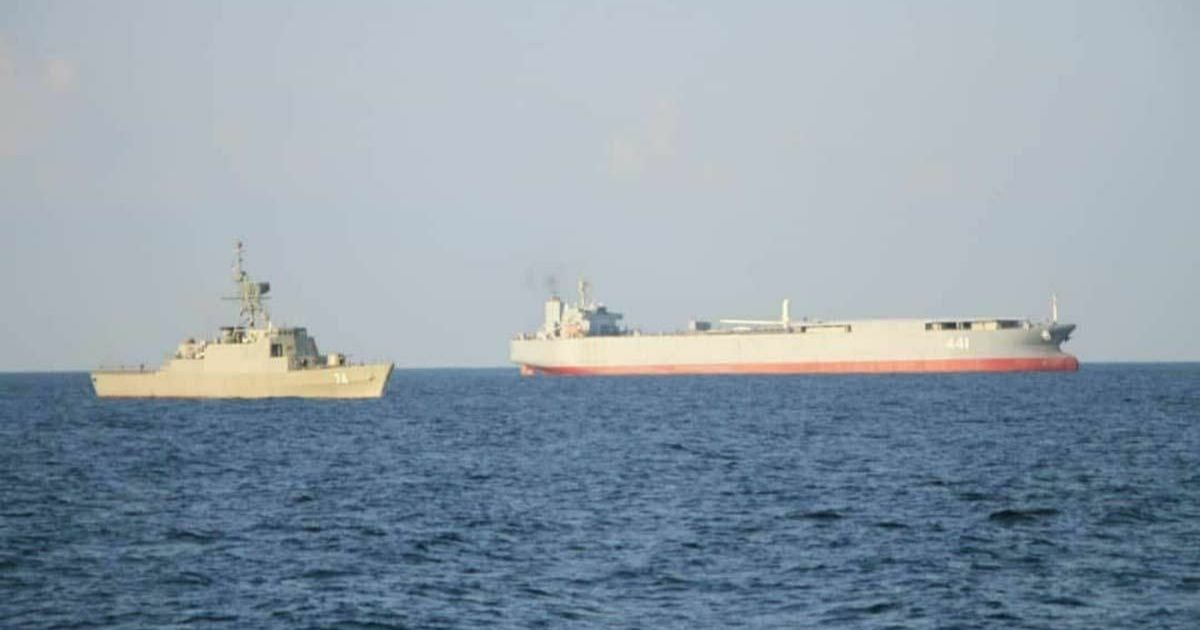 Two Iranian warships are navigating the Atlantic Ocean on a novel mission with an unknown final destination.

The frigate vessel “Sahand” and the base ship “Makran” departed from Iran’s southern port of Bandar Abbas last month, according to the Independent. The pair sailed 6,000 nautical miles through the Indian Ocean and around the southern tip of Africa to enter the Atlantic for the first time ever.

The purpose of the vessels’ journey and their current location is unknown.

According to ABC News, Iranian Foreign Ministry spokesman Saeed Khatibzadeh refused to give details about the trip in a May 31 news conference.

“No country is able to violate this right, and I warn that no one makes miscalculations. Those who sit in glass houses should be careful.”

American officials speculate that the vessels are bound for Venezuela carrying long-range missiles and fast-attack boats, according to Politico.

“The delivery of such weapons would be a provocative act and understood as a threat to our partners in the Western Hemisphere,” a senior Biden administration official noted in a statement.

“We would reserve the right to take appropriate measures in coordination with our partners to deter the transit or delivery of such weapons.”

The Biden administration has yet to take any recursive action against the two nations, which have drawn closer together in recent years as they face U.S. sanctions and geopolitical pressure from the West.

“The precedent of allowing Iran to provide weapons to the region causes me great concern,” Austin said, according to The Hill.

“I am absolutely concerned about the proliferation of weapons, any type of weapons, in our neighborhood,” he noted.

Lawmakers voiced similar concerns about an Iranian attempt to project power outside of its regional sphere of influence.

“Venezuela bought attack boats from Iran last year, but only now are they trying to deliver them,” Republican Sen. Marco Rubio wrote on Twitter.

“Either [Venezuelan President Nicolás] Maduro unconditionally turns them away or [the] U.S. should force them to turn around.”

#Venezuela bought attack boats from #Iran last year,but only now are they trying to deliver them

Ignore the petty sniping from Biden official & focus on what matters

Either #Maduro unconditionally turns them away or U.S. should force them to turn around https://t.co/SB8OaYUlBx

Some lawmakers are less willing to forcefully disrupt the suspected arms transfer.

“I think you should always try a diplomatic effort. But let’s be realistic,” Republican Sen. Rick Scott said, according to Politico.

“The threat is the precedent it sets, because the UN arms embargo is no longer on Iran and they’re free to import and export,” she said. “This could be the first of many transfers we see.”

There is little the Biden administration can do at the moment to restrict or impede Iran’s Atlantic-bound warships, as interfering with the vessels would be a violation of international law and precedent.

Under UN rules, sovereign immunity is granted to all government ships, including warships. During a period of peace, nations are free to sail the open waters.

Government vessels are allowed to navigate even in territorial and internal waters, according to Foreign Policy.

For this reason, Washington may have to choose between abiding by the backbone of President Joe Biden’s international agenda — the preservation of the “rules-based order” — and preventing the ships from porting in Venezuela.