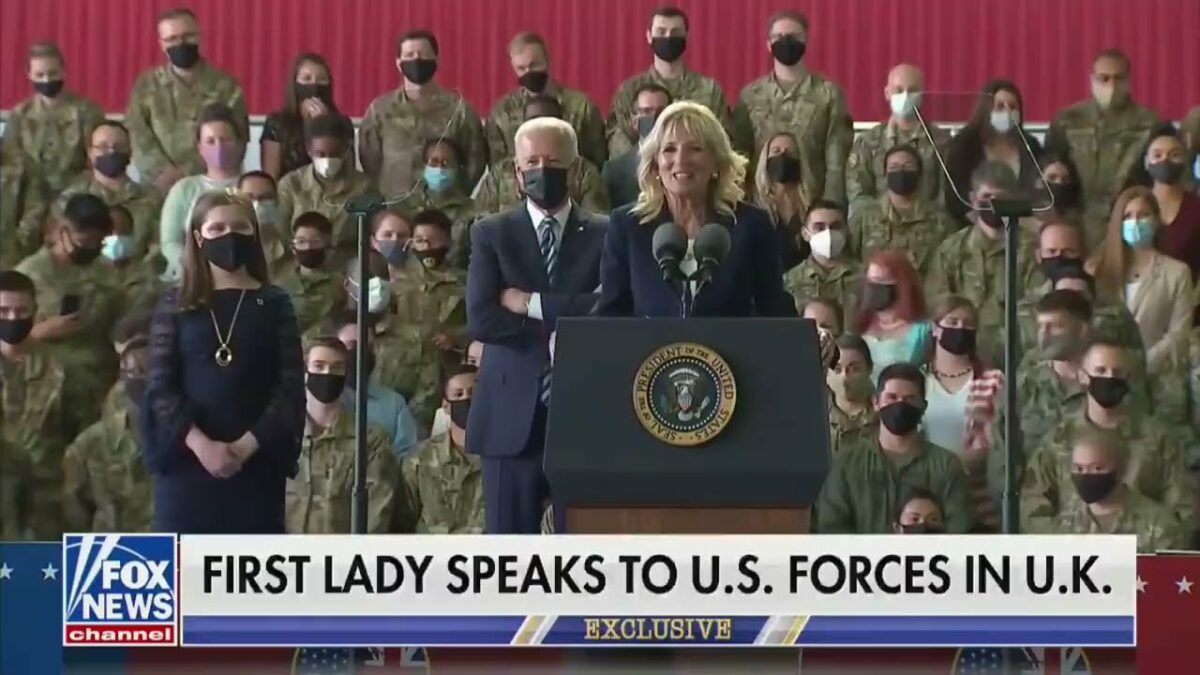 The following article, Clueless Joe: First Lady Has to Tell Biden to 'Pay Attention' During Speech in UK, was first published on Flag And Cross.

We’re all used to President Joe Biden acting like a class clown — whether intentionally or not — and he’s certainly playing the part on his first overseas trip as leader of the free world.

During a speech to American troops stationed in the U.K., first lady Jill Biden had to tell Joe to “pay attention” to her.

Check it out here:

The speech kicked off an international trip that will include a G-7 summit and a meeting with Russian President Vladimir Putin, Fox News reported.

If this moment is a sign of things to come, the Bidens aren’t done embarrassing the U.S. on the world stage.

The audience of U.S. troops at Royal Air Force Mildenhall in Suffolk, England, had hardly had time to sit down before being treated to one of Biden’s token gaffes.

As the service members took their seats, the president seemed to become distracted, turning around to watch the fascinating process.

The first lady turned from the microphone to tell her husband, “Joe, pay attention,” drawing laughter from the crowd.

Biden then hammed it up with a mock salute to his wife.

The rest of the event wasn’t free of Biden’s blundering, either. In the middle of his own speech, Biden said he “keeps forgetting” he’s the president of the United States, to more laughs.

Ironically, our enemies are likely making the same mistake.

Biden didn’t limit his antics to this event. No, he acted out once again during a short conference with British Prime Minister Boris Johnson.

After Johnson told Biden, “Everybody is absolutely thrilled to see you,” Biden replied with one of the most cringe-inducing statements he could have made.

“Thrilled to meet your wife,” Biden said, before telling reporters that both he and the prime minister “married way above our station.”

PM BORIS JOHNSON: “Everybody is absolutely thrilled to see you.”

BIDEN: “Trilled to meet your wife.”

BIDEN: “I told the Prime Minster we have something in common: we both married way above our station.” pic.twitter.com/OL6Pw2uK7Z

At first, yes, it’s funny — silly old Joe getting distracted and making shameless remarks without passing them through a mental filter.

But it’s less cute when you remember that this is the president of the United States.

While China carries out military invasion exercises and Iran issues threatening propaganda, Biden happily makes a fool of himself.

Let’s hope the rest of his trip convinces world leaders that America isn’t as weak as her president seems to be.