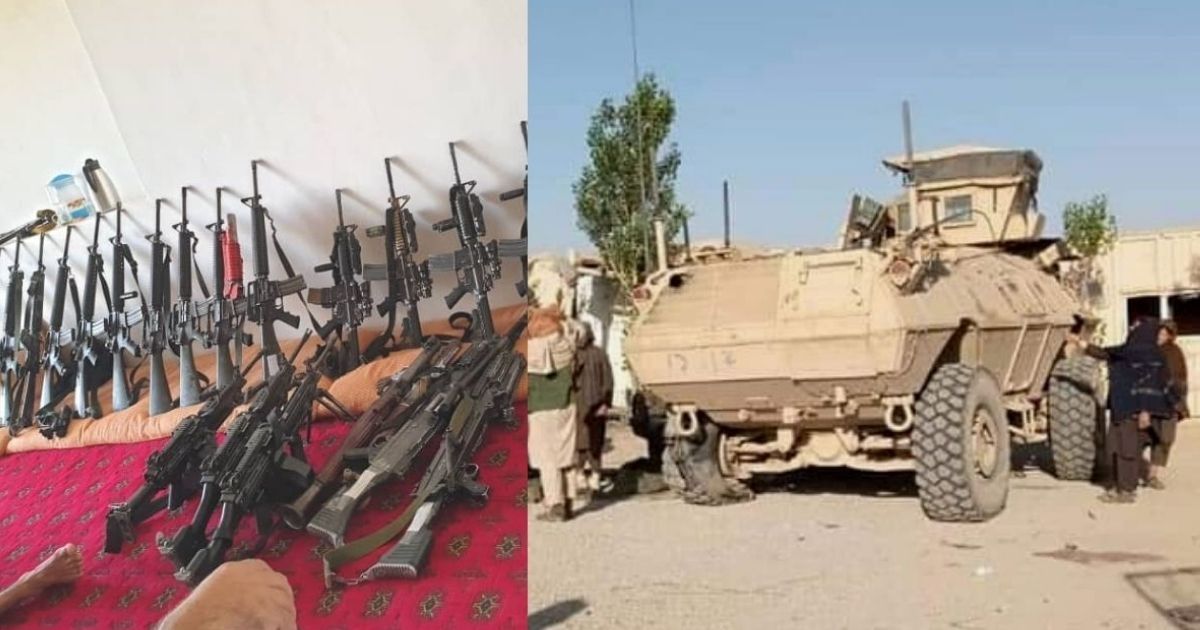 The following article, Biden's Military Disaster: Taliban Celebrates as They Take Possession of Precision US Weapons, Armored Fighting Vehicles, was first published on Flag And Cross.

Leo Tolstoy wrote that “war is always pernicious even when successful.”

The United States’ ongoing withdrawal from Afghanistan demonstrates the truth of this claim.

His posts included several pictures of booty from the conquest, which included American-made machine guns, rifles, carbines and armored vehicles.

“The enemy fled on seeing the casualties, and a large number of tanks, heavy and light weapons and ammunition fell into the hands of the Mujahideen,” he tweeted.

The Taliban also allegedly shot down a government helicopter, according to Afghan media outlet Ariana News.

Wardak: Taliban claim an Afghan army helicopter was shot down in the Chaghato district of Maidan Wardak province last night. They said the helicopter was downed while trying to rescue security force members who were under siege. #ArianaNews #Afghanistan #MoD #Chopper #Taliban pic.twitter.com/ZxstWv6o2p

News of the Taliban’s successes is merely the latest in the movement’s pernicious campaign to capitalize on the U.S. withdrawal, reassert its hegemony over Afghanistan and reinstate the government that the U.S. overthrew 20 years ago.

Alas, Afghan forces are unlikely to prevent a resurgence of the Taliban without American military presence. Despite the fact that America spent more than $2 trillion on the war effort and committed two decades of training efforts, Afghan security forces are, by all measures, a joke.

Indeed, there is something of a sad understanding on the ground that the Afghanistan government will wholly cave to the Taliban once the U.S. is gone, and a hardline interpretation of Sharia will once more become the law of the land.

“We want an Islamic government ruled by the Sharia,” said Taliban shadow mayor Haji Hekmat, according to BBC News. “We will continue our jihad until [government forces] accept our demands.”

It is a difficult statement to argue with, particularly given the Taliban’s recent acquisition of American-made armament that will now be used to further the violence directed at the Afghan government.

Such is perhaps the inevitable perniciousness of war, however, and despite the coming convulsions in Afghanistan, there is little chance that increasing the number of American troops or weapons in the nation would have any meaningful impact toward fostering peace.

It is a point stated clearly by former Michigan Rep. Justin Amash in a recent tweet.

“No more airstrikes. No more war,” Amash, a libertarian, wrote. “Twenty years of military involvement in Afghanistan — the longest war in U.S. history — provides more than enough evidence that our weapons will not end this conflict, but they will add to the bloodshed and suffering.”

No more airstrikes. No more war. Twenty years of military involvement in Afghanistan—the longest war in U.S. history—provides more than enough evidence that our weapons will not end this conflict, but they will add to the bloodshed and suffering. https://t.co/pF7rDHKw3u

Indeed, Amash is onto something for once.

The violent rush to fill the power vacuum that the U.S. is leaving in Afghanistan is a necessary result of foreign interventionism and a war carried out without meaningful objectives.

If Afghanistan falls to the Taliban or, worse yet, outright collapses, let it be a lesson that all such wars must end similarly.