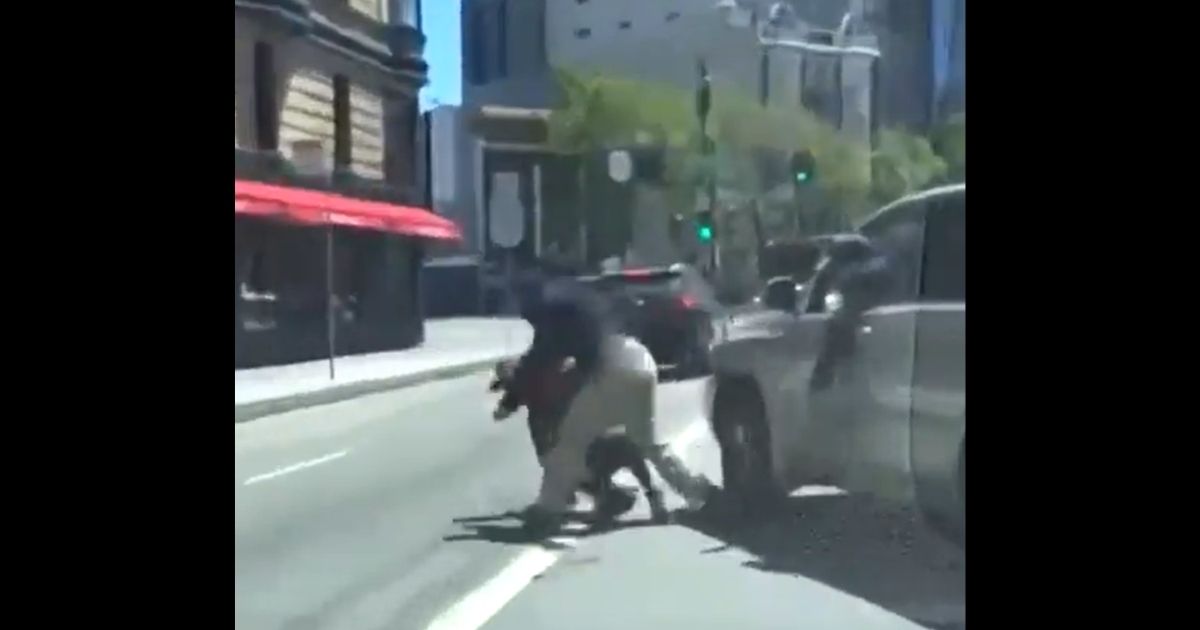 It sounds like the premise of a high-concept Thanksgiving comedy, except it’s actually my life and it means Thanksgiving is only comical if you’re looking in as a disinterested third party: I’m a white conservative writer with a wife of Chinese descent who’s more conservative than me and a white mother who’s a bit like Elizabeth Warren without the law degree or fake Native American heritage.

While the whole political-minefield family dinner scenario we hear about around the holidays is mostly a myth, I’m one of the unlucky ones who not infrequently watches the limbs get blown off a peaceful repast as someone hits a sociopolitical tripwire.

Mostly, though, they stay friendly and express their political grievances through me, which somehow works out better.

One of the current bees in my mother’s bonnet, planted there by too many nights of watching MSNBC: My wife and daughter aren’t safe because of anti-Asian hate crimes, and we have our conservatism to thank for it.

The dots aren’t hard to connect for her. The moment then-President Donald Trump uttered the words “China virus,” it was a dog whistle that burrowed deeply into the circuitry of the TrumpBots across America. Now, every time one of these MAGA-hatted savages espies someone of Asian descent, their amygdala goes into overdrive and … well, who knows what they’ll do next? If only we hadn’t helped elect that … man.

Leave aside the fact that there’s doubtlessly plenty of motherly love stirred into that broth of Chris Hayes-induced fear and I-told-you-so-ing. There’s a reason the Trump-centric theory regarding anti-Asian hate crimes is prima facie false — and it’s best illustrated by a daylight attack against an Asian-American UPS delivery driver in San Francisco last week.

According to KPIX-TV, the attack happened near Gough and Market Streets around the Hayes Valley neighborhood on June 3.

A viral video showed the driver, a Vietnamese man named Minh, trying to defend himself against an attacker in the middle of the street. The attacker delivered several punches before running off.

WARNING: The following video contains graphic violence that some viewers will find disturbing.

𝗔𝘀𝗶𝗮𝗻 𝗣𝗮𝗰𝗸𝗮𝗴𝗲 𝗗𝗲𝗹𝗶𝘃𝗲𝗿𝘆 𝗗𝗿𝗶𝘃𝗲𝗿 𝗔𝘁𝘁𝗮𝗰𝗸𝗲𝗱:
⠀
This happened around 2pm along Gough & Market in San Francisco Thursday. A retired UPS worker & friend of the driver shared this with me.

In a series of tweets, KGO-TV’s Dion Lim said “the Vietnamese man was making deliveries when a man came out of the tan Toyota, hit the driver in the face and grabbed the box he was holding.

“The suspect then fumbles before getting back into the car. The suspects are still at large.”

People on his delivery route tell me he had teeth knocked out & he has a swollen face.
⠀
I was on another story today but if anybody has info call SFPD.
⠀
To think porch pirates were the biggest issue involving mail carriers not that long ago…#StopAAPIHate #SanFrancisco

“They start to hit me in my face, and they hitting me in my teeth, I lost two teeth here,” Minh told KPIX. “They hit in my back, and I fell down, and the wheel in the front they run over my feet.”

He said the suspect in the video had tried to take a package off his delivery cart, which is how the confrontation began.

He added that he was pointing to the package because he thought the driver in the tan Toyota would come to his aid, not knowing that was allegedly the getaway driver. The suspect didn’t get the package, however, and ended up falling while trying to get into the SUV.

“Right now, especially Asian delivery drivers putting their life out on the life for a job and my dad was just trying to do his job like to the extent to the fullest,” Minh’s daughter Tiffany told KPIX.

“So he didn’t have to run after that man, but that man had to use violent forces against him which was uncalled for.”

There hasn’t been an arrest in the case yet, so it’s unclear who the suspect is. His race and ethnic background are unknown and unknowable from the evidence provided. His motive is also unclear; it’s difficult to call an attack on an Asian-American UPS delivery man a hate crime when it began with an attempted robbery.

However, there’s one statistic that gets bandied around a lot when attacks like this happen: 149 percent. That’s the increase in anti-Asian hate crimes that America’s largest cities saw in 2020, according to a study by the Center for the Study of Hate and Extremism at California State University in San Bernadino.

In San Francisco, with a 35 percent Asian population, reports were up 50 percent.

I’d be flippant to say I’m not worried about the trend as a husband and a father. Why I’m more worried, however, is that if this is a trend that needs to be solved, we’ve been led astray by a cultural red herring. That’s something that’s easy enough to prove by looking at the California State University in San Bernadino study — specifically, where it was taken.

Of the 16 cities featured in the study, only one — San Diego — has a Republican mayor. The rest are all run by Democrats — and aren’t known as hives of covert MAGAdom.

As the Washington Examiner noted, New York, San Francisco and Los Angeles had the most hate crimes reported against Asians, respectively. In New York, Trump received 23 percent of the vote. In San Francisco, he received 13 percent. In Los Angeles, 27 percent.

And yet the genesis of this is supposed to be Trump calling COVID-19 the “China virus.” Thus, the fact these are liberal cities and that other factors are in play — particularly historic tensions between black and Asian communities — means we’re treating the wrong cultural pathogen.

Whoever attacked the UPS driver needs to be brought to justice. If a hate crime was involved, the person should be charged with it.

Don’t try to affix the blame on Donald Trump’s supporters or anger over the coronavirus, however, and then cloak yourself in faux concern over my wife and daughter.

Misguided though she may be, I don’t doubt my mother’s sincerity. As for everyone else, that’s another issue entirely.