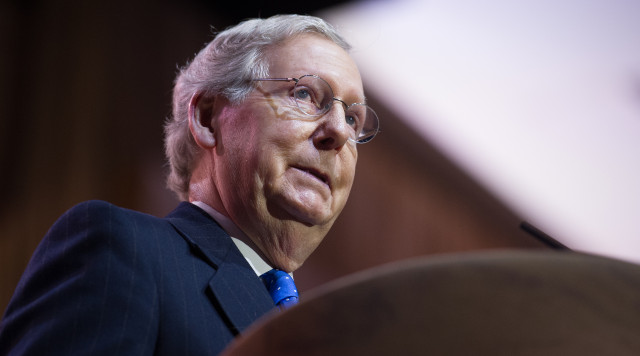 For decades upon decades, American government has been prone to gridlock and obstruction, but that’s just the price that you pay when everyone in the nation has a say in how we are governed.

This latest stagnation on Capitol Hill comes at a bitterly divided time in our nation’s history, as the left and the right sides of the aisle continue to spend an inordinate amount of time attacking one another as the American people beg for something, anything out of their elected officials.

Now, as this blame game kicks into full gear, Mitch McConnell has a message for the radical left.

McConnell told “America’s Newsroom” that Ocasio-Cortez’s agenda “is not in the middle,” adding that he doesn’t believe she can “sell her agenda” to the Democrat party, nor find any appeal from Republicans.

McConnell made the comments reacting to a tweet where Ocasio-Cortez warned that time is precious, reminding fellow Democrats that the majorities they enjoy in the House and Senate might not last.

The back and forth was heated, to say the least.

“Dems are burning precious time & impact negotiating w/GOP who won’t even vote for a Jan. 6 commission,” she continued. “McConnell’s plan is to run out the clock.

“We had six major bills so far this year passed on a bipartisan basis where we worked together and we met in the middle,” McConnell noted on Thursday, before noting that Ocasio-Cortez’s agenda “is not in the middle.”

“I don’t think she could sell her agenda to their own party, much less find it any kind of appeal for that on my side,” he continued.