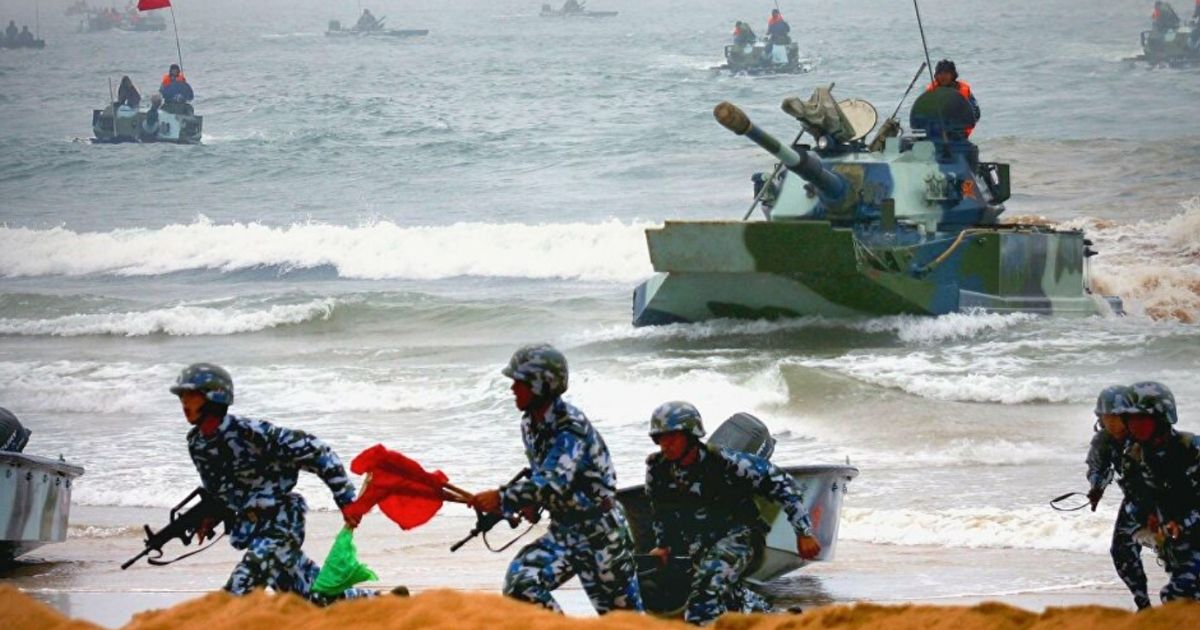 The following article, It Looks Like China Is Preparing for a Full Shock Assault Landing to Retake Taiwan, was first published on Flag And Cross.

The Chinese military continues what appear to be preparations for a potential invasion of Taiwan, which threatens an eventuality that would force President Joe Biden to make an ugly foreign policy decision.

According to the South China Morning Post, “The Chinese military has conducted an amphibious landing exercise in waters near Taiwan amid renewed tensions between Beijing and Washington.”

It makes sense that, in addition to testing missiles over Taiwanese airspace, the Chinese military would be practicing amphibious operations, given that these would be necessary to invade an island like Taiwan.

“As part of the exercise, wheeled amphibious armoured vehicles entered the dock of amphibious landing ships, which then sailed to a target sea area where the vehicles left the ship and steered towards a beach,” the Morning Post noted, based on footage provided by the Eastern Theatre Command of the People’s Liberation Army.

#Chinese military has conducted an Amphibious assault landing exercise near #Taiwan waters, days after a delegation of the #US senators visited the estranged island in a military plane as a show of support. #IDU #teamIDU pic.twitter.com/oYgryUKp2U

What is happening should be clear.

It has become a world economic power and its military prowess now would make it competitive with the United States in combat.

As a consequence, China is willing to upset the status quo on this front, potentially trying to seize Taiwan, which it believes to be a breakaway province, and forcing the United States to act in defense of an ally or sit on its hands as a sovereign state falls to tyranny.

We have long maintained a policy of “strategic ambiguity” in relation to China and Taiwan.

This means that we support Taiwan against Chinese aggression without making it clear whether we would actually intervene militarily should China invade the island.

Though China may not invade in the near future, its continued aggression makes such a conflict seem inevitable, which would force the United States to make a serious decision.

We provide Taiwan with military equipment to defend itself against a Chinese invasion.

But if China were to launch such an assault, we would be forced either to destroy our reputation with our allies by leaving Taiwan to fend for itself militarily, leading to its inevitable takeover by Chinese forces; or deploy American troops to the island, which could cost thousands of American lives and billions of dollars with little guarantee that America would win.

Because of this, it is incumbent upon Biden to ensure that this does not become a full-scale military conflict.

His administration needs to be extraordinarily hard on China.

This means, at least in part, that we should continue conducting surveillance and providing intelligence and logistical support to Taiwan, while working to disrupt the Chinese blockade of the island and bolster the Taiwanese navy against amphibious assaults.

And while we do this, the Biden administration must hammer home the point to the rest of the world that China is a garbage, communist country looking to usurp a free people and subject them to authoritarian rule.

This is no secret either.

China initially cut a “one country, two systems” deal with Hong Kong, which also served as a template for future relations with Taiwan.

But, in practice, that looked like a tiny democracy agreeing to come under the control of a major authoritarian regime, having been promised effective autonomy.

The regime then reneged on the deal by cracking down on pro-democracy protesters, jailing or effectively vanishing dissidents and rigging the election system to favor supporters of its expansionist agenda.

And when the rest of the world took note of China’s malicious activity, it dissuaded foreign intervention by flaunting its military and noting that the territory belonged to mainland China.

Taiwan has had the good sense not to be part of this sort of deal — and U.S. support has been a major factor.

The United States must make sure that free countries, especially our own allies, are not oppressed by authoritarian regimes — and that our allies can trust our support when their liberty is at stake.

As far as China is concerned, there should be enough blowback for its genocide of Uyghur Muslims, jailing of freedom protesters and possible leaking of the coronavirus that an attempted invasion of a sovereign state would be off the table.

The Biden administration must make certain of it — otherwise, a far less certain situation could arise.

Continue reading: It Looks Like China Is Preparing for a Full Shock Assault Landing to Retake Taiwan ...