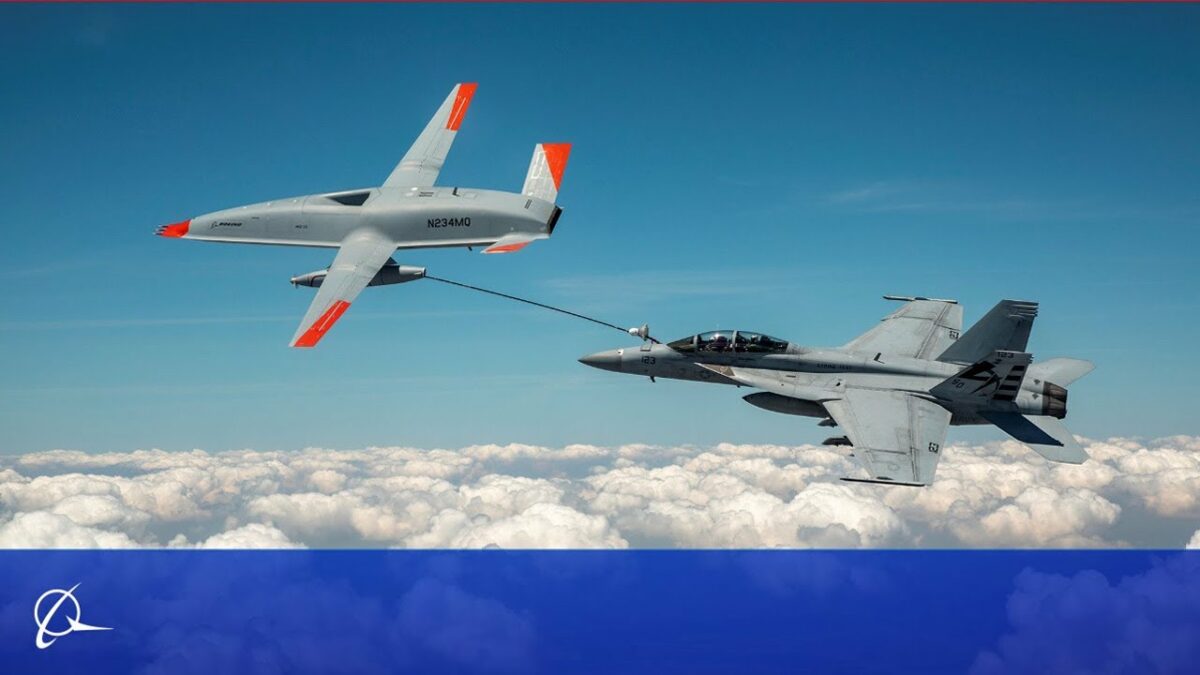 The following article, US Navy Successfully Refuels Fighter Jet in Midair with Unmanned Drone in Huge Breakthrough, was first published on Flag And Cross.

There was not a gas station attendant anywhere for miles around Friday as aviation history was made when a drone refueled a Navy fighter during a test flight over the Midwest.

A Navy F/A-18 Super Hornet and a Boeing-made drone flew about 20 feet apart during the refueling, according to CBS.

During the test, the drone pumped 325 pounds of fuel into the Hornet, said Dave Bujold, Boeing’s MQ-25 program director.

Bujold said Navy officials wanted to see for themselves how the process of lining up moving parts for refueling in mid-air would work with a drone.

“They wanted to see how stable it was to be flying in close proximity to the aircraft,” he said, according to Defense News.

“They wanted to observe officially, using their trained eyes, the behavior of the air refueling store and the basket. Very important to see stability and [have] confidence that when they approach it, it’s not going to try to hurt them.”

Bujold said the Navy pilots were in constant communication with the drone pilot and on the first connection between the two aircrafts, there was no refueling performed, just a test round.

About 300 pounds of fuel was then pumped into the Hornet on the second connection he said, as the planes flew at 10,000 feet.

Another 25 pounds of fuel was delivered at 16,000 feet, he said, noting that the drone and fighter connected and disconnected several times.

The Navy said the drones and conventional aircrafts will be a one-two punch for the United States.

“Unmanned systems alongside our traditional combatant force provide additional capability and capacity to give our warfighters the advantage needed to fight, win and deter potential aggressors,” said Captain Chad Reed, program manager for the Navy’s Unmanned Carrier Aviation program office. “The MQ-25 is that first step towards a future where the carrier-based fleet is augmented by unmanned systems.”

“This is our mission, an unmanned aircraft that frees our strike fighters from the tanker role, and provides the Carrier Air Wing with greater range, flexibility and capability,” he said according to a Navy statement. “Seeing the MQ-25 fulfilling its primary tasking today, fueling an F/A-18, is a significant and exciting moment for the Navy and shows concrete progress toward realizing MQ-25’s capabilities for the fleet.”

In writing about the test, Popular Mechanics explained the importance of the concept, noting that the drone can be used to not only fuel F/A-18 Super Hornet fighters, but also E-2D Advanced Hawkeye airborne early warning aircraft.

“The Stingray’s ability to refuel Hawkeyes is particularly critical, as the E-2D is the eyes and ears of the carrier strike force, peering out and detecting threats far beyond radars on surface ships. The longer a Hawkeye can stay on patrol, the better protected the carrier is from low-altitude threats,” it wrote.

“This flight lays the foundation for integration into the carrier environment, allowing for greater capability toward manned-unmanned teaming concepts.” #MQ25 is the first unmanned aircraft to ever refuel another aircraft.

Officials of Boeing and the Navy hailed the event.

“This history-making event is a credit to our joint Boeing and Navy team that is all-in on delivering MQ-25’s critical aerial refueling capability to the fleet as soon as possible,” said Leanne Caret, president and CEO of Boeing Defense, Space & Security, according to a Boeing news release. “Their work is the driving force behind the safe and secure integration of unmanned systems in the immediate future of defense operations.”

“This flight lays the foundation for integration into the carrier environment, allowing for greater capability toward manned-unmanned teaming concepts,” said Rear Adm. Brian Corey who oversees the Program Executive Office for Unmanned Aviation and Strike Weapons.

“MQ-25 will greatly increase the range and endurance of the future carrier air wing – equipping our aircraft carriers with additional assets well into the future,” and deck handling demonstrations aboard an aircraft carrier later this year, according to the statement from the Navy.

The Navy said that the Stingray “will be the world’s first operational carrier-based unmanned aircraft and provide critical aerial refueling and intelligence, surveillance and reconnaissance (ISR) capabilities that greatly expand the global reach, operational flexibility and lethality of the carrier air wing and carrier strike group.”