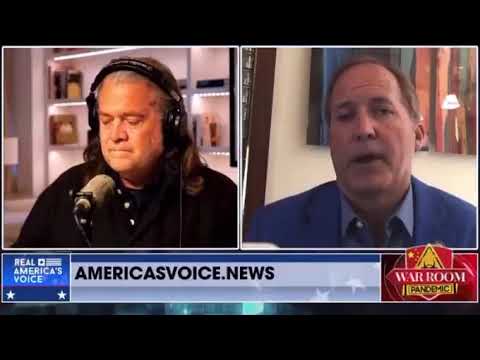 The following article, Texas AG Claims Putting a Stop to 'Illegal' Mail-In Ballots Shut Down Democrats, Resulted in Trump Taking the State, was first published on Flag And Cross.

To Texas Attorney General Ken Paxton, the decision by his state’s Republican leadership last fall to stand firm against allowing local Democratic officials to send out millions of “illegal” mail-in ballot applications saved the integrity of the 2020 election — while denying Joe Biden a potential victory in the Lone Star State.

We’ll never know what election outcomes might have been elsewhere, had Democrats in states such as Pennsylvania, Georgia, Michigan and others not taken advantage of the coronavirus pandemic in order to send out such ballots and ballot applications.

“We would’ve been in the same boat. We would’ve been one of those battleground states that were counting votes in Harris County for three days, and Donald Trump would’ve lost the election,” Paxton told Bannon.

“Trump won by 620,000 votes in Texas. Harris County mail-in ballots that they wanted to send out were 2.5 million, those were all illegal, and we were able to stop every one of them,” Paxton said.

Paxton, a veteran of political fights in the legal arena, is qualified to speculate on the result of the election in Texas. He demonstrated he saw what was on the horizon when he waged a courtroom battle in the second half of last year to prevent Houston from becoming another Detroit or Philadelphia.

After the Texas Supreme Court ruled in September to block Harris county from sending out those ballots, Paxton rightly celebrated, The Texas Tribune reported.

In a statement, the AG said Harris County election officials “knowingly chose to violate Texas election law and undermine election security” when they sought to send out ballot applications in the mail, the Tribune reported. Those ballots, as they did all over the country, either could have taken advantage of holes in the system cast doubt on election security in Texas.

The latter certainly happened elsewhere. Then-President Donald Trump warned months before the election that such ballots were vulnerable to fraud. Would Biden have lost if other states had taken the Texas approach to election security?

Looking back anecdotally at the mess mass mail-in voting created, not one of the many notable oddities in swing states worked out in favor of Trump.

Late-night leads on Election Day for Trump became ties or even Biden victories by the morning of Nov. 4. Days after the voting, many areas of the country were still counting ballots.

Whether that was simply a product of mail-in system demographics or evidence of malfeasance will forever be a question on the minds of many voters.

Last year’s mail-in approach to voting has done more damage to the country’s democratic process than anything in recent memory. That is why we are seeing some states seeking to shore up voting security to ensure the system doesn’t fail people who just want to vote in a fair election.

Americans are generally willing to accept the results of a race if they don’t feel that system is designed to create chaos. In states such as Texas and Florida, there was no chaos.

Texas isn’t a battleground state — yet. But Republicans in office are working to ensure that, win or lose, their voters will know each race in the future is handled as securely as possible — as was the 2020 election.

Paxton, who’s proved himself a fighter, was working to stop the mass mail-in voting debacle in his state before it muddied up the waters — as it did elsewhere, and as it would have done in Harris County.

Voters in other states must demand that same commitment to election integrity from their officials. Otherwise, 2024 could see a handful of Democrats in only a handful of states again leave millions of Americans wondering if their votes were for nothing.

The 2020 mass mailing of ‘mail-in-ballots’ scheme was what put old china-joe in the whitehouse. In previous elections the dems found that their voter fraud use of illegal’s votes, multiple voting by liberals, and dead people’s votes were not enough. The dem’s schamdemic in 2020 ‘allowed’ them the use of mass ‘mail-in-ballots’ which along with using their rigged vote-counting machines and with the dems controlling the vote count, and this time it worked for them. Future elections must stop all this voter fraud and require voter ID to save America from the communists now threatening the country.