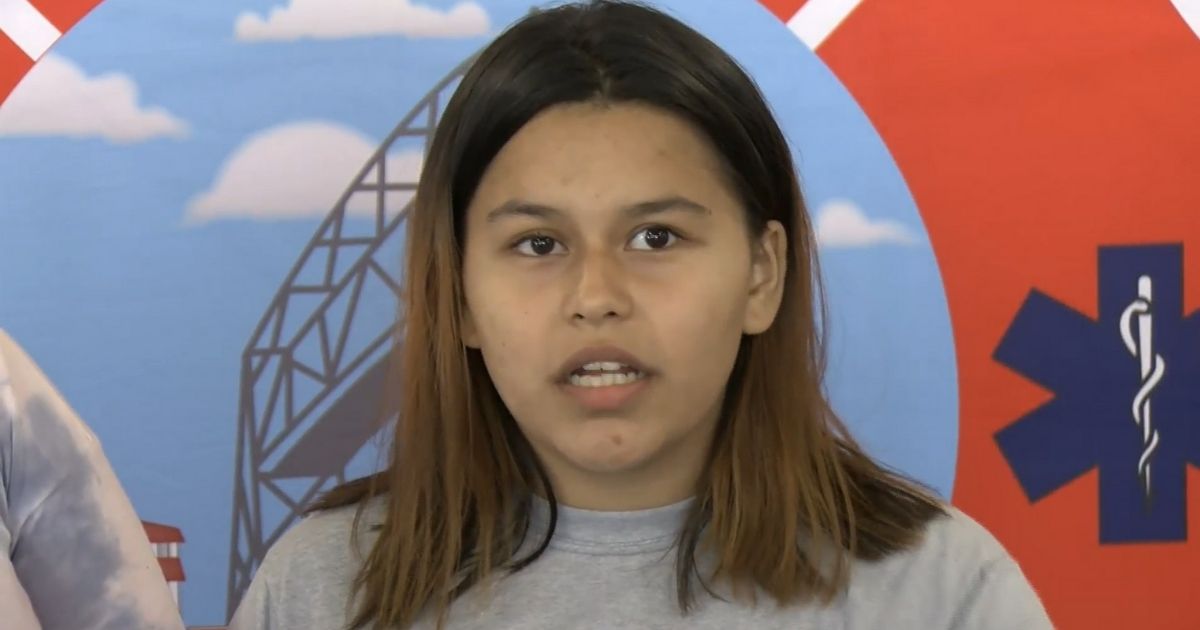 The following article, Teen Girl Races to Save Family from Raging House Fire After Wall Tapestry Bursts Into Flames, was first published on Flag And Cross.

When 15-year-old Lizzy Grayhawk of Duluth, Minnesota, woke up at 12:49 a.m. Tuesday, she immediately knew something was wrong. She was uncomfortably hot, and a quick glance around the room showed why.

“I woke up because like it was getting real hot on the side of me, and my whole tapestry was on fire, and the LED lights, and then the stuff on my top bunk were on fire,” Lizzy said during a news conference, according to KBJR-TV. “It was really scary.”

She then ran to the bathroom to try to figure out if she could do anything to stop the flames, but she made the right call and realized what she needed to do was alert the rest of her family.

Lizzy ran to wake her parents, Louie and Chelsie, and they went about waking the other five members of the household. Dad Louie also tried to put out the fire, burning his hand in the process.

Though they were all surprised by the fire, they were not unprepared. The Grayhawk family had previously put together a fire escape plan, and because of that preparedness, were able to exit the home with their lives — and just in time.

“She did the right thing, came and got us and she helped us all get out of the house, right away,” Chelsie said, according to the Duluth News Tribune. “Within minutes, a huge fireball flew down the stairs and blew out the glass and slammed the doors and that was the way we came out.

“So within minutes, we would’ve … It wouldn’t have ended so good. Probably more of us would have ended up in the hospital.”

The Duluth Fire Department responded to the fire and Fire Chief Shawn Krizaj spoke highly of the family’s actions.

“That was actually really good to hear of all the things that they did,” he said. “That they talked about it ahead of time, they actually had a plan, they used their plan, and it worked, and everyone got out safely.”

The fire was believed to be accidental and electrical in nature, according to a post by the Duluth Fire Department. Though the four kids and four adults made it out of the home with only Louie getting hurt, the family has been displaced and lost most of their possessions.

The Red Cross is helping them with shelter, and a family member has started up a GoFundMe to try to help the family rebuild their lives.

According to initial estimates, the family lost about $50,000 in possessions and the house they were renting at the time suffered $75,000 in structural damage. According to their GoFundMe, their renter’s insurance had lapsed.

“Everything was lost in the fire, and it doesn’t look like we’re going to be able to save much, so we’re starting over from scratch,” Chelsie said.

But thanks to Lizzy, the family won’t also have to process and grieve the loss of any of their family members. Houses can be rebuilt and items replaced, but it’s because of Lizzy that the family is still whole.

“Thanks to the quick thinking of a fifteen-year-old who alerted her family to the fire, they were all able to get out of the home safely,” Assistant Chief Dennis Edwards said. “If she hadn’t woken up, and notified her parents, this could have been a different situation. She was very brave.”