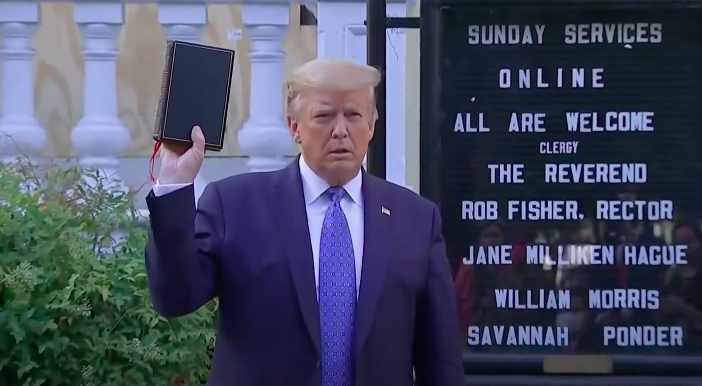 The following article, MSM Caught in ‘Big Lie’ as Feds Reveal Reason for Clearing Lafayette Square, was first published on Flag And Cross.

For over a year now, the mainstream media has consistently and continually attempted to vilify Donald Trump for a number of reasons, not the least of which was an incident that occurred in Washington DC one year ago this month, in which the then-President took a photo in Lafayette Square amid heavy protests that were dispersed with tear gas.

The infotainment industry has long suggested that the tear gassing of protesters on that day was done simply for the sake of Trump’s photo op, and pundits have been leaning into this assumption heavily when they criticize the 45th President of the United States.

As it turns out, all of that fuss was undeniably out of place.

An internal government investigation has determined that the decision to forcibly clear racial justice protesters from an area in front of the White House last summer was not influenced by then-President Donald Trump’s plan to stage a Bible-toting photo opportunity at that spot.

The report released Wednesday by the Interior Department’s inspector generalconcludes that the protesters were cleared by U.S. Park Police last June 1 so that a contractor could get started installing new fencing.

The timing of the incident is proof positive that the media’s portrayal was purposefully inaccurate.

Park Police officials had already planned to clear the area and “had begun implementing the operational plan several hours before they knew of a potential Presidential visit to the park,” Inspector General Mark Lee Greenblatt said in a statement accompanying the report.

As CNN and others continue to bludgeon the nation over the head with their talk of a “big lie”, perhaps it’s time that they were reminded of the anecdote about throwing stones in glass houses.