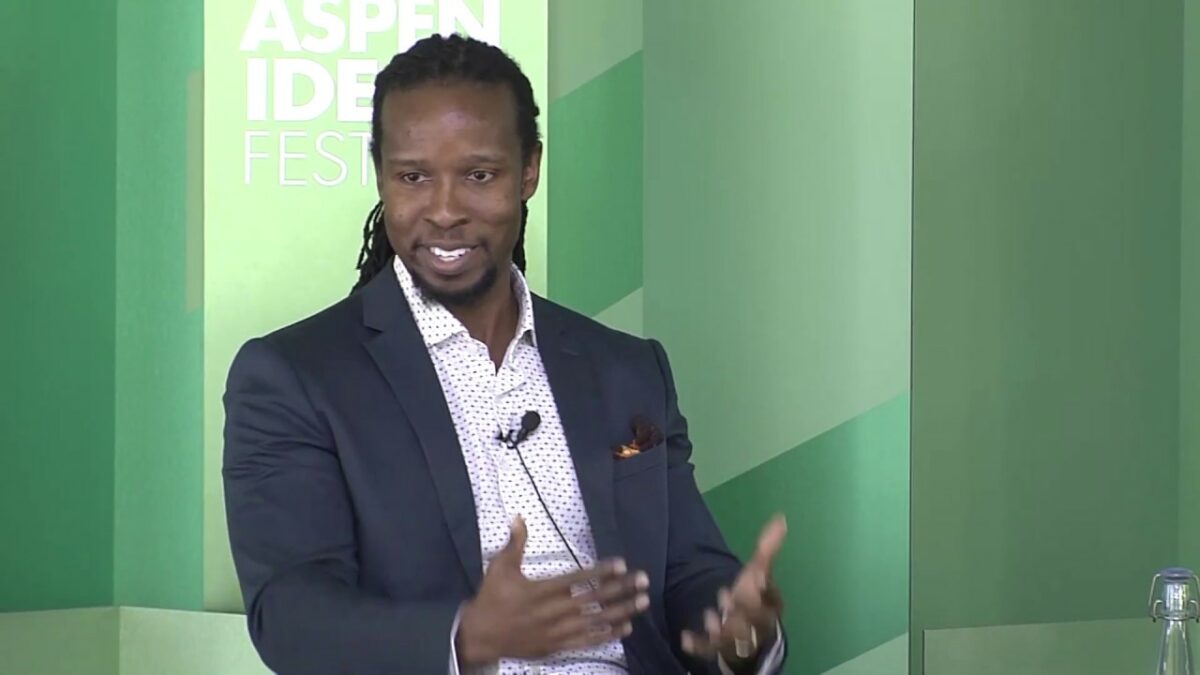 The following article, Flashback: Top 'Anti-Racist Scholar' Scrambles to Define Racism After Question from the Audience, was first published on Flag And Cross.

Over the past couple of weeks, renewed attention has been given to a June 2019 appearance at the Aspen Institute by critical race theorist Ibram X. Kendi, author of the book “How to Be an Antiracist” and founding director of the Antiracist Research and Policy Center at American University.

The reason for the renewed interest in this discussion is that Kendi was asked by an audience member for his personal definition of racism, which is central to his entire philosophy.

Kendi’s response happened to be ridiculous.

Seated onstage next to fellow race grifter Jemele Hill — who last week essentially called Joe Manchin a white supremacist for supporting the Senate filibuster — Kendi responded to the question by explaining, in effect, that racism is whatever it needs to be.

This is so on brand for this country. Record number of black voters show up to save this democracy, only for white supremacy to be upheld by a cowardly, power-hungry white dude. @Sen_JoeManchin is a clown. https://t.co/fCMuyoLer3

“Racism, I would define it as a collection of racist policies that lead to racial inequity that are substantiated by racist ideas,” he said.

Laughably, Kendi rattled off his definition so smoothly that the audience acted stunned by his utter profundity. Judging from what happened next, it seems as though someone asked him to repeat the definition more slowly, which Kendi did with pleasure.

Feeling confident, Kendi then defined anti-racism unprompted: “And anti-racism is pretty simple using the same terms. Anti-racism is a collection of anti-racist policies leading to racial — anybody want to take a guess? — equity that are substantiated by anti-racist ideas.”

None of this means anything.

You cannot include the word being defined in the definition of the word.

So why are we treating this like it is profound?

It’s because our elite ruling class thinks many Americans are stupid.

They believe that if you live in the heart of the country and work in a factory and require “fairy tales” to cope with the reality of existence, then they will leave the deplorable God- and gun-clinging to you — and you should just leave the discussion of ideas to the smart people.

And this is the ideology underlying what the “smart” people think today.

This means that he is an ideologue who views the world through the lens of skin color.

Only capable of univariate analysis — which, by the way, is exactly how you identify an ideologue — he apparently believes that all problems are caused by a single factor: racism.

And the solution to each problem is to eliminate the singular cause: racism.

Now, for all of American history up until recently, we believed that racism was the belief in the superiority or inferiority of a person based on their race.

That is in fact what racism means.

But now we happen to be several generations removed from the end of Jim Crow and the success of the civil rights movement in terms of attitudes on race.

In other words, there just aren’t that many Americans remaining who are racist by the traditional definition of the term.

Therefore, the definition must be changed.

To concede the decline of genuine racism would be to admit that the founding philosophy of the United States — liberty and equality for all — has triumphed over the grift, and that our capacity for evil can be overcome by the belief in something transcendent, something more abstract than immutable characteristics like skin color.

So Kendi and his anti-racist ilk have changed the language, believing that many Americans would be too foolish to keep pace.

But as it turns out, anti-racism is just another iteration of leftist ideology that we have defeated before.

We already decided that defining people by their group membership, demonizing a common enemy and then rigging the system to reverse the supposed power imbalance is entirely un-American.

This is why we had largely defeated Marxism and actual systemic racism by the end of the 1960s, and why we have now undermined the neo-Marxism that gained prominence in the ’60s and held that the wealthy were oppressing the poor.

The Marxian intergroup conflict continues to mutate from factory owners versus workers to rich versus poor to whites versus non-whites.

The legacy of America will be her continued ability to quell the worst excesses of the human heart and subvert them to the belief in freedom and equality for all people.

It is the grift of “progressives” like Kendi to revert back to the ancient tribalist tendencies of our ancestors, breeding resentment, stoking undeserved guilt and courting revolutionary changes of group dominance.

Kendi and the anti-racists are not going to define their terms.

To do so would be to expose the underbelly of their entire worldview to whatever sharp instrument people use today for cutting through lies and insincerity.

That would mean no more invitations to speak at the Aspen Institute.

And it would certainly mean the government doesn’t simply point at naked disparities, automatically conclude racism and then punish Americans for the consequences of living freely in a free country.