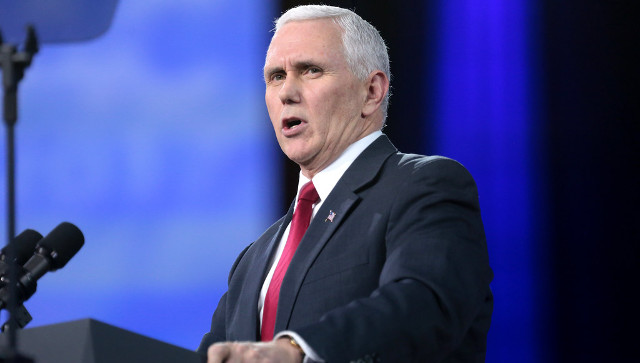 Former Vice President Mike Pence is in a bit of Republican limbo at the moment, but he appears to be ready to get back out in the limelight.

Pence come under intense scrutiny toward the end of President Trump’s first term, thanks to Trump himself, in many cases, on account of his unwillingness to derail the certification of the electoral college results in 2020.  This had the MAGA wing of the party seething, and would-be insurrectionists in the Capitol were heard chanting “hang Mike Pence” as they stalked the halls of Congress.

And while there is a bit of murkiness to be had between Trump and Pence, there is no doubt regarding Pence’s opinion on Joe Biden.

From a speech in New Hampshire this week:

“We made history. We made a difference. We made America greater than ever before,” said Pence, who had been welcomed to the stage with a warm introduction by his friend New Hampshire Gov. Chris Sununu (R). “But how times have changed. You know the governor said he didn’t come here to bash the current administration. Well I did,” Pence said as he was met with more applause.

He continued, “So buckle up. I mean 134 days, and the Biden-Harris administration has launched an avalanche of big government liberal policies, the likes of which I’ve never even imagined I’d see in our lifetime, and all of it designed to derail the progress that we made over the last four years.”

There is much speculation about what Pence’s role could be in the party moving forward, and this speech certainly seem to give the impression that he’s not done with politics yet.