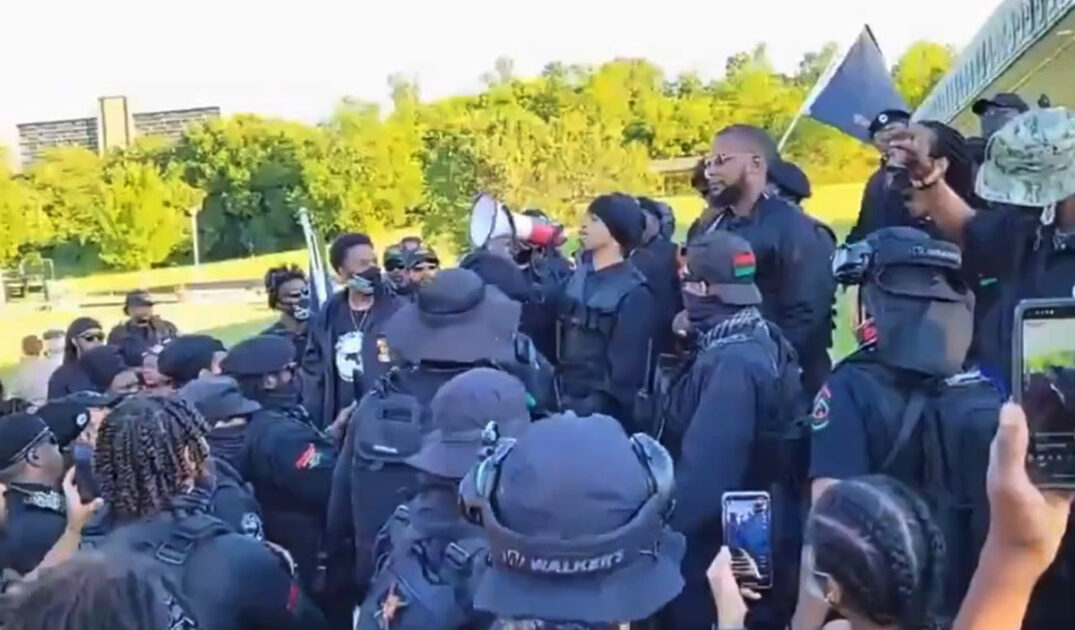 The following article, WATCH: Speaker At National Black Power Rally Says ‘Kill Everything White In Sight’, was first published on Flag And Cross.

Some shocking footage emerged at an alleged “black power” rally in Tulsa, Oklahoma, over the weekend. national black power rally

Hundreds of black men and women wearing black gathered in Tulsa for the National Black Power Convention on the weekend, listening to speakers discuss black nationalism and white supremacy. An armed march through the city was also staged to nearly coincide with the 100th anniversary of the 1921 Tulsa Race Massacre. Members of the New Black Panther Party participated in the march.

Some of the videos that have been circulating on social media from the event are very disturbing.

One speaker said that the movement pushed “death” to white supremacy, capitalism, imperialism, and (ironically) fascism.

SPEAKER: We’re pushing death to white supremacy, death to capitalism, death to imperialism, and death to fascism. We’re pushing an eye for an eye, a tooth for a tooth, a head for a head, and a life for a life. White supremacists bust us upside the head and drug us over here to pick cotton, so they can get rich, so they can get wealthy, but I would like to tell you, even though you are not in Africa, Africa was born in you. Africa was born in you! This is a powerful historical event, we must not let it stop right there. We must push deeply into the so-called black-on-black violence, the community violence, the fear, the self-hatred, which pits us to fight each other, which pits us to gang bang. We must go into our hood. Not outside the hood — the real hood — [unintelligable] and teach those Bloods, teach those Crips, that they start a revolution there. You must understand that. They put us through vicious suffering, vicious oppression. And when we defend ourself, once they die, we must understand that we can never give them the pain that they gave us. Once they are buried, we must bury them, dig them up, and kill them again. Bury ’em, dig ’em up, and kill ’em again.

Another speaker with the megaphone said, “When that time’s comin’ to ‘rat-a-tat-tat, then black people will kill everything white in sight because of all what you’ve done to us, all of what you’ve done in the 6,000-year span and killing 600 million of us and 408 years in particular, and a 150 million in the past.”

“They are a race that’s trying to hold on to power, and a race has a beginning and an ending, and your ending time has been made up since 1914, no-good peckerwood,” he added, “This is the birth of the black nation.”

“This is the time when Malcolm talked about,” he said. He spoke about a “united front” of all black revolutionary progressives and that it was time to “give these crackers hell.”

Another said, “The vicious, greedy-ass white man took the land. We were 1,000 years before Columbus, godammit. My direct blood leanings 1,000 years before Columbus. And we know that the white man, his graveyard, only goes back a few hundred years, our graveyard go back a few thousand years on this street, on this soil, on this land.” He then calls for reparations in the form of land.

Let’s just take this thought to its natural conclusion… if black people have been here for 1,000 years before Columbus, then that means that the entire premise of the 1619 Project — that slavery is what built America — is utter bullcrap.

Well, we already know it’s bullcrap, but for actual reasons, instead of the anti-historical B.S., this guy is spouting.

Interestingly, after that guy who doesn’t seem to know history called for reparations in the form of land, another speaker said that the black community hasn’t asked for a single thing.

another clip in case it wasnt clear enough pic.twitter.com/SZ4doF28PT

Remember the absolute outrage and 24/7 wall-to-wall news coverage of a handful of disgusting and vile white supremacists with tiki torches who showed up in Charlottesville in 2017 with their racist, anti-semitic chanting? And continues to tie this to Trump despite his repeated condemnation of the racists?

Hell, that was the even that Joe cited as his motivation to run for President. (Sure, Joe. Sure. It wasn’t because of the Biden family pay-to-play, right?)

But while the Corporate Media fixates on hate of one sort, they brush aside hate on the other side.

Hatred doesn’t have one skin color, or one religion, or one ideology. It can be found everywhere, and it should be condemned everywhere. Our media used to know that.

Keep in mind that we ‘white people’ have the ability & means to shoot back. Anyone that does not like our country is free to return to Africa.