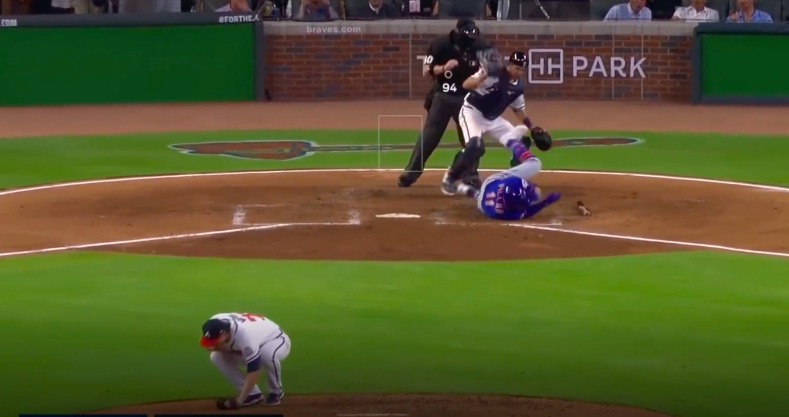 The following article, SEE IT: Scary Moment Mets’ Player Takes Fastball to the Face, was first published on Flag And Cross.

Baseball is back, with what should be a full-length season, and with only minimal coronavirus interruptions so far.

And, even better yet, there are fans in the stands all around the nation, including some stadiums that are back at full capacity.

Players have been openly enthused about having thousands of fans cheering them on once again, and there is little doubt that the energy has translated into some exciting moments.

But the game isn’t all cheers and jeers.  Sometimes, it’s a quiet fear that encapsulates the ballpark.

Such was the case this week in Atlanta.

New York Mets outfielder Kevin Pillar was involved in a scary scene Monday night against the Atlanta Braves when he was struck in the face by a pitch in the seventh inning.

Pillar was up with the bases loaded when he took a 94 mph pitch to the face from Braves pitcher Jacob Webb. Somehow, Pillar was able to get up and walk back to the dugout under his own power.

He offered an update on his condition hours after he was removed from the game.

“Thanks to everyone that has reached out! Scary moment but I’m doing fine!” he tweeted.

The awful moment was caught on video, but we must warn you, this could be tough to watch.

Pillar suffered from a number of nasal fractures, and will be seeking medical treatment in Atlanta as the team continues this series.