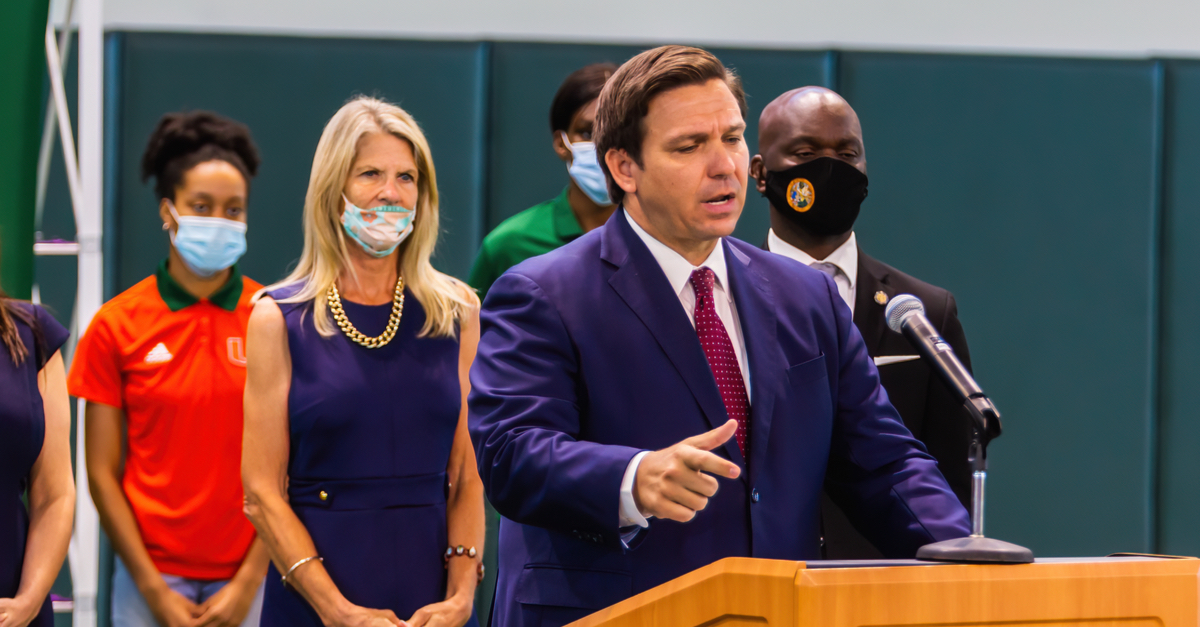 The following article, Florida Governor Offers Pardons to Anyone Convicted of COVID Infractions, was first published on Flag And Cross.

Every day, it becomes more obvious that Florida Governor Ron DeSantis has dreams of running for President in 2024, and this week was no exception.

The Sunshine State politician has aligned himself heavily with in-state political heavy-hitter Donald Trump on just about any issue out there, even taking some of these ideologies further than the former President himself.

It seems as though DeSantis has a rather large grudge with COVID-19 precautions as well, consistently pushing for Florida to move quickly and sternly toward unfettered freedom on the matter.  He was one of the first state lawmakers to rescind coronavirus restrictions, and has made a very public show of it all, which has belied his belief in a higher political calling.

On Wednesday, DeSantis took another very public shot at those who continue to see coronavirus as a public health threat in need of government intervention.

Florida Gov. Ron DeSantis will pardon anyone in the Sunshine State charged for not wearing masks or socially distancing — breaking the news live on air to a gym-owning couple who were facing jail time for defying coronavirus safety recommendations.

The Republican governor made the unexpected announcement on Fox News Wednesday as he decried county officials penalizing people.

“It’s a total overreach,” he told Laura Ingraham. “These things with health should be advisory, they should not be punitive.”

The governor did not mince his words.

He broke the news of his pardon directly to Mike and Jillian Carnevale, who faced up to 120 days in jail for repeatedly allowing people to forgo masks at their gym in Plantation in Broward County.

“I’m glad you have Mike and Jillian on, and I’m also glad to be on to be able to say that effective tomorrow morning, I’m going to sign a reprieve under my constitutional authority,” the governor said as the couple and their attorney listened with wide smiles.

“So that will delay the case for 60 days against both of them, and then when our clemency board meets in the coming weeks, we’ll issue pardons not only for Mike and Jillian, but for any Floridian that may have outstanding infractions for things like masks and social distancing,” he promised.

The news came just hours before the CDC announced that it was lifting indoor and outdoor mask suggestions for any fully vaccinated American, with the exception of those considered high-risk and those who are traveling.