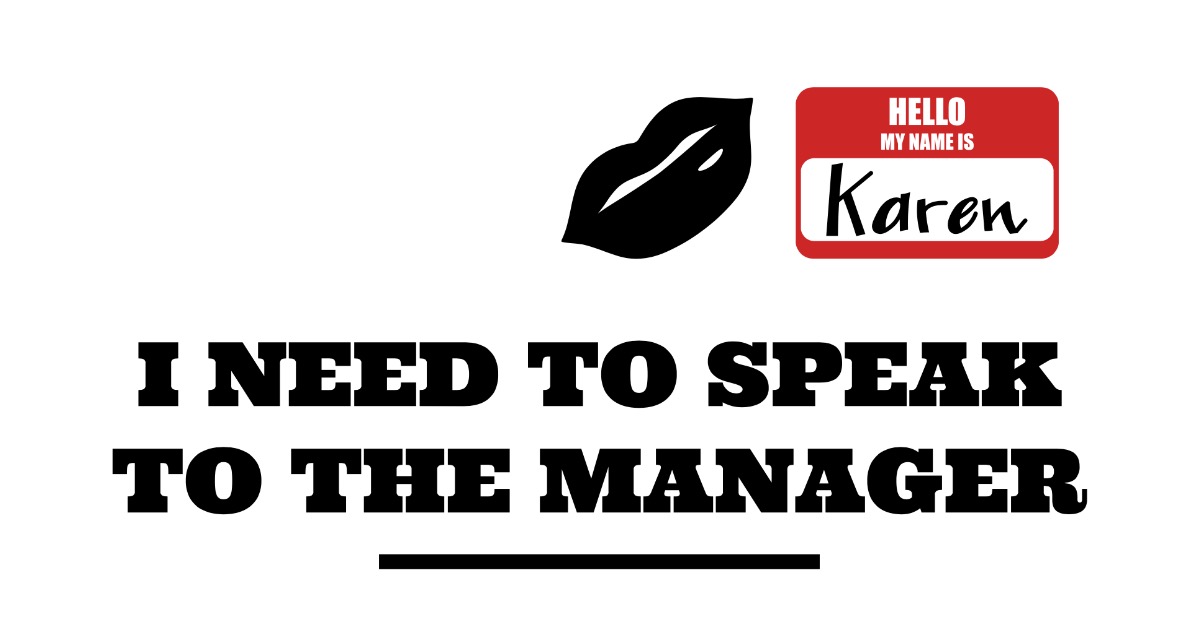 The following article, DAVIDSON: ‘Karens’ & ‘Kyles’ – Labels for People the Left Would Like to Cancel, was first published on Flag And Cross.

The other day I was emailing back and forth with a high school friend, who resides in my native state of Connecticut. We were catching up on our mutual classmates. When I asked about one particular woman, he wrote back, “Yes, she’s doing fine, but she is an absolute Karen.”

A ‘Karen’ by Any Other Name

I had encountered the meme many times before, and was familiar with what it means, but I wanted to know exactly what he meant by it. At first he balked and said, “Look it up.”

When I press him for a response, he said, “It’s a woman who thinks that she is always right. No matter what a restaurant serves her, she complains and sends the dish back to the kitchen.”

“It’s an easy way to sum up someone who has the traits above. You just say, ‘She’s a Karen!’” After reading his definition I became curious. Is calling a woman a ‘Karen’ anti-white racism? After all, the meme is primarily, if not solely, only reserved for white women, right? What would occur if you happened to call a person of color a ‘Karen?’ Would that not work?

Derogatory, if Not Racist

KnowYourMeme.com refers to a ‘Karen’ as a type of person who says, “Can I speak to the manager?” She is the one in a crowd who is likely to be publicly vocal. She feels that she is entitled, as much so as others deem her to be ignorant or intolerant.

By some accounts, a ‘Karen’ is a plus 45-year old woman with an asymmetrical short hair cut, commonly know as a bob. Years in the making, the meme is generally chosen for its association with ‘whiteness’. So, a ‘Karen’ is a Caucasian woman and often she has a haircut that is not acceptable to the crowd that employs such memes.

Of late, the male equivalent to a ‘Karen’ has emerged, referred to as a ‘Kyle.’’ This is a man who is socially aggressive, perhaps even hostile, with a thirst for five-hour energy drinks, and a preference for Axe Body Spray. He is not averse to punching in drywall. He is a grown man now, but invariably he was offensive as a teenager.

Shall We Turn the Tables?

As happens with issues on the Left, if you reverse the situation, you are deemed to be insensitive, a racist, and oppressive. You are someone who is deserving of the cancel culture’s wrath.

Suppose, for the sake of experimentation, that a variety of popular minority men’s names became memes. What if the name DeShawn or LeMarcus or Rashaad, for example, was employed to convey a host of undesirable characteristics? What if Tanisha or Kiara or Leticia was employed the way ‘Karen’ is employed? Would that go over well?

How insulting and how degrading would it be for anyone to use any name frequently associated with minority individuals, particularly black individuals, as a descriptive meme. Who would not think that it was offensive? Yet, those who toss around the meme ‘Karen,’ or ‘Kyle,’ think nothing of it. Why? They are part of the protected class.

They can call others a ‘Karen’ and not worry that anything will happen to them on the job, in their personal life, online, or anywhere in between.

I Should Have Spoken Up

I didn’t tell my high school friend that as a result of him calling one of our classmates a ‘Karen’ I felt that he had stepped out of line. I didn’t tell him that I felt it was derogatory. I didn’t mention that if he had said the name of a black female to use as a meme, it would be equally derogatory, and of course the cancel culture crowd would jump on this, while they have no concern for memes about Caucasians.

Strange times we live in, with one set of rules for one side the political spectrum and a different set of rules for the other. Sure, more compelling issues linger, but labeling individuals as a ‘Karen’ or ‘Kyle’ is one of so many indicators of how self-entitled and even demented members of the Left happen to be.

Continue reading: DAVIDSON: ‘Karens’ & ‘Kyles’ – Labels for People the Left Would Like to Cancel ...