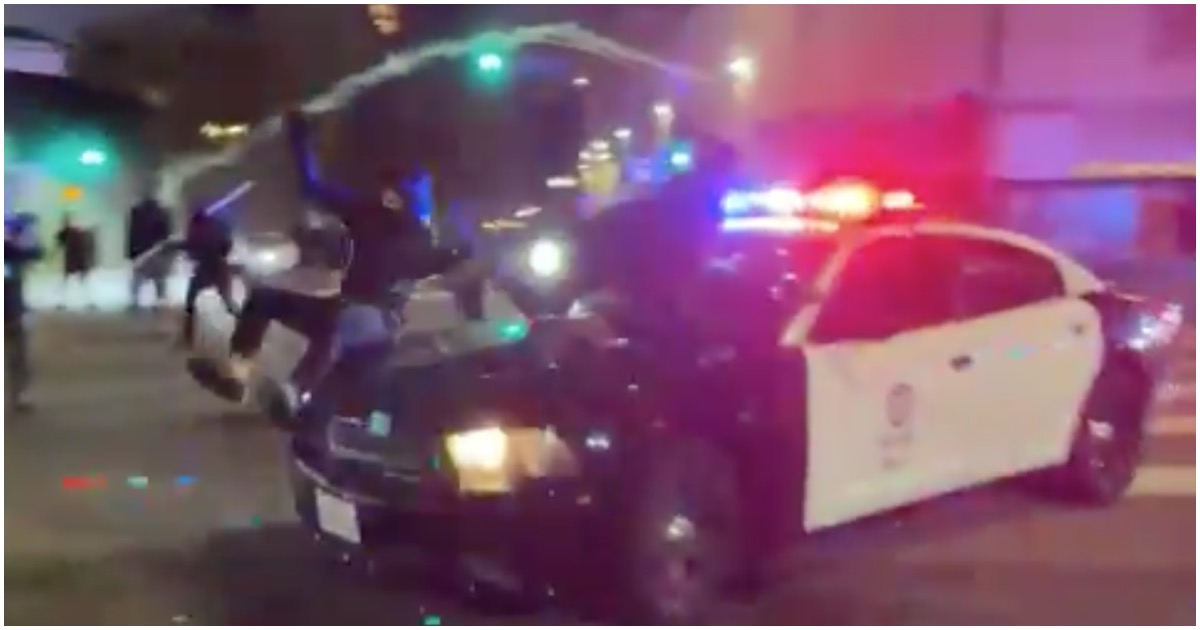 The following article, Must See: Antifa Goon Jumps On Hood of Cop Cruiser, Officer Continues to Drive Away (Watch), was first published on Flag And Cross.

Antifa radicals took to the streets on Sunday evening because…who knows why? These people don’t have to wake up for work the next day, so it’s all the same to them.

How screwed in the head do you have to be to attack a cop and hate your country?

The goof on the hood of this cop cruiser should be asked that question.

At the #antifa riot in Los Angeles, two rioters jump on a police vehicle to attack it. One of the rioters stays on the car as the officer drives off. #AntifaRiots #BLM pic.twitter.com/NMOiDAab9l

Andrea Pauline Nadal was arrested and charged at the violent #antifa riot in Seattle overnight. She was quickly released from custody without bail. She was one of the people at the deadly CHAZ last year. #SeattleRiots pic.twitter.com/DG6cRkRkCP

Antifa riot on the streets of Los Angeles overnight by smashing up businesses and property. #AntifaRiots pic.twitter.com/hkiMe3iKKN

Portland is in the process of erecting the protective fencing around the federal courthouse, less than a week after they came down, due to Antifa violence.

Earlier this week, #antifa attacked the federal courthouse in downtown & set it on fire after officials removed the protective barrier that stood for more than 8 months. Now the barrier is being put back. Video by @BGOnTheScene: pic.twitter.com/hhiYB3DELY

Antifa is not an idea it’s a terrorist organization nothing more nothing less… They just are allowed to get away with it because wokeism has taken over the upper echelons of law enforcement. https://t.co/WMXu3y6lNP

What a bunch of scumbags. It’s still cold so bring out the water cannons and cool them down.