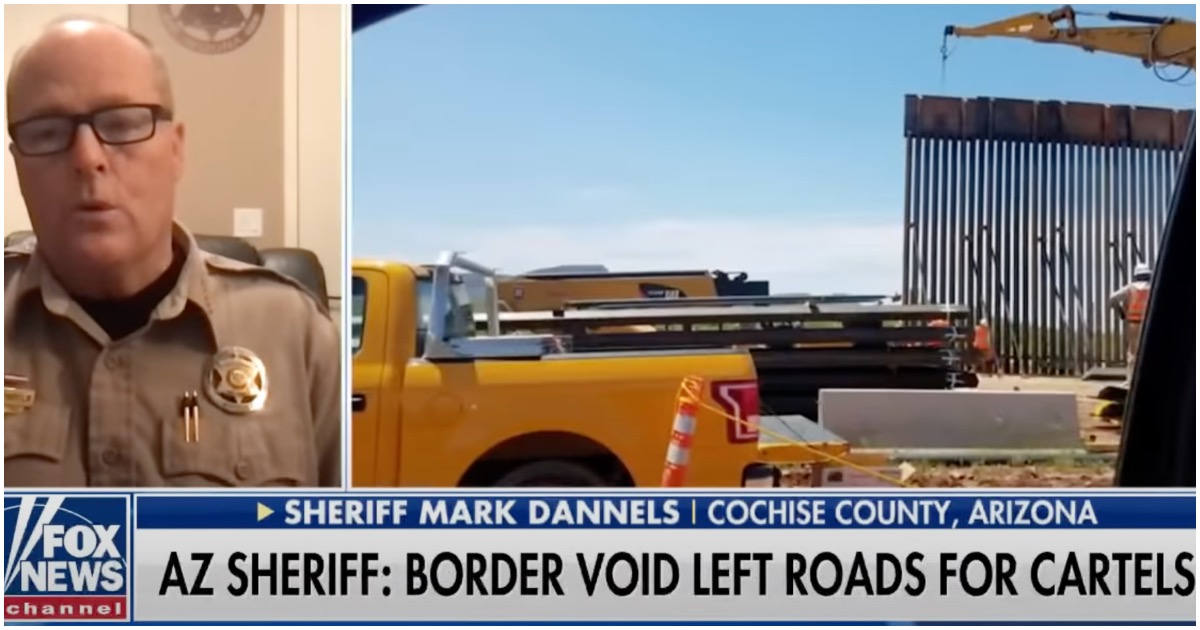 The following article, Sheriff Says Border Crisis Was Under Control During Trump’s Term, Biden Made A Mess, was first published on Flag And Cross.

Well, it looks like we can file this report under DUUUUUHHHHHH!!!

Cochise County Sheriff Mark Dannels slammed President Joe Biden during a Fox News interview this week for the ongoing crisis on the U.S.-Mexico border, saying that Biden’s reversal of the last administration’s policies have caused a serious problem on the border.

“When President Biden rescinded the emergency order on the southwest border, it stopped resources, and it stopped construction on our border,” Dannels said. “As a result of that, one area where the fence is not complete, we get five or six groups a day coming across there. It’s [opened up] the border. It opened up the message that it’s okay to come in this country. This administration owns this decision. And what it’s doing is it’s forcing us back to 2019, where we had the largest what I call crime scene in the country to include the largest humanitarian situation going on.”

Thanks @benshapiro for highlighting South Dakota's respect for freedom and our work to protect the right to life of babies diagnosed with Down syndrome! https://t.co/oayVF6UH9y @realDailyWire

Blue-checks are afraid of life getting back to normal. Really. They are tweeting this to their followers right now. https://t.co/vvbkygcHTJ

Continue reading: Sheriff Says Border Crisis Was Under Control During Trump’s Term, Biden Made A Mess ...

As obama told the world, old joe will manage to f-word everything up. He is showing the world that he is a bumbling senile old fool and should never have been allowed into the Whitehouse.

I’m sure the Left, those who pull his strings, have known and planned on him being only a place holder. Why they chose _Harris_ of all the possible Democratic primary candidates is beyond me. Perhaps she was the one most willing to do as she is told, but her ego is such that I’m sure she will quickly attempt to exert her own authority, her own agenda, to the absolute horror of anyone who still loves and supports America and our Constitution. Those who put her on the ticket with Biden won’t let her get away with it, but they… Read more »

Tom, you are right, but I hope you don’t believe it is really Biden who is making these decisions, do you?

Nor Obama. He isn’t bright enough either.

Yeah, the entire world has to realize that old joe isn’t really making any decisions and is merely the ‘face’ behind them. Wondering when/if we will see who is that ‘puppeteer’.

I’ve read that Susan Rice is the one who directly handles Bidet (sorry, couldn’t help myself), but I think someone above her decides what Biden says and doesn’t say. From the little I have seen of his mid-day “naps”, I’m guessing he is probably dosed with a mild stimulant, wound up, and paraded before the cameras. It may not belong before he is no longer capable of making lucid statements, even with a teleprompter. That is when we will see the 25th Amendment invoked, and Horizontal Harris sworn in as (gag me) the new occupant of the White House.