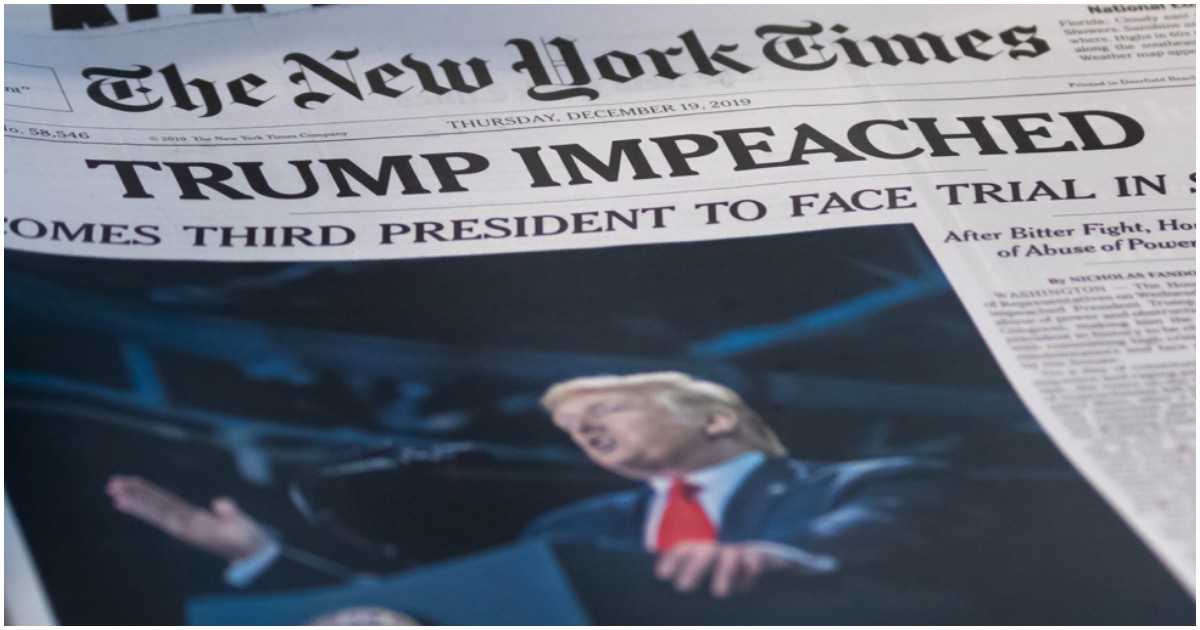 Impeachment was supposed to be a vital and rarely used mechanism used by Congress, for the protection of the people, in response to egregious acts committed by the U.S. president or others in government. Instead, Nancy Pelosi, Adam Schiff, Chuck Schumer, Jerry Nadler, and all the rest of the vicious Democrats in Congress, as well as six RINOs have used it as a convenient weapon of choice against Donald Trump because they hate him with a passion that exceeds all rationality.

Note to Democrats and RINOs: Hatred is insufficient grounds for drafting articles of impeachment. If so, impeachment proceedings for Obama would have been initiated ASAP.

Bogus from the Start

The first Trump impeachment over a phone call, which was part of the public record, had numerous people on line at the same time. Donald Trump had no quid pro quo with the Ukraine government. Former Vice President Joe Biden did. He and his family pocketed millions from his pay-for-play schemes with Ukraine, Russia, Kazakhstan, Romania, and China.

The Democrats all knew this, but they didn’t care. Impeachment was a ready made tool, sitting there, ready for their use. Never mind that their bogus assault upset 244 years of American governance. Never mind that it contorts the effectiveness and reputation of Congress, the trust of the people, and centuries old protocols.

The venal, vindictive Nancy Pelosi chose to proceed anyway, because after all, Donald Trump must be stopped, right? He only created the greatest economy that the country had seen in decades, increased minority employment and home ownership in unprecedented ways, stopped ISIS dead cold in their tracks, helped peace break out in the Middle East, promulgated an endless supply of energy so that we became not only independent, but an energy exporter, and so on.

One could fill an encyclopedia with what Donald Trump accomplished in four years. None of that matters to Nancy Pelosi and Company; they need to permanently harm Trump politically. So, following the Capitol riot which, has repeatedly been proven that Trump did not incite, she invoked impeachment once again.

The Theatre of the Absurd

Here in February, we have Donald Trump ‘voted’ out of office as a result of massive fraud and being accused of something that he did not do. Make no mistake, Pelosi’s intent as dangerous to the country as anything that we’ve witnessed since our founding. She’s using impeachment as a weapon to punish an adversary, devoid of evidence, fairness, and any semblance of ethics.

Contemplate this: If Donald Trump or anybody else in America, for that matter, plans to give a public presentation at a rally or protest, and people infiltrate the event are we to hold responsible those sponsoring or speaking at the event? In Washington, on January 6th, President Trump’s rally was infiltrated by members of Antifa, as well as several right-wing groups. It has been proven that in advance these groups intended to disrupt the day’s proceedings, in one way or another.

Correspondence and communication between group members show that they intended to march on the Capitol, and cause whatever disturbance they could. If we blame Donald Trump for these intruders, and their criminal actions, and decide that he is liable, we are taking a path unlike any other taken before: There is no way to protect our First Amendment rights after.

Not surprisingly, when you unleash a storm as Nancy Pelosi and company have, and overturn centuries of precedence, be prepared for what happens thereafter.

Only a single day after Biden was sworn into office, Congresswoman Marjorie Greene (R-Ga.) filed articles of impeachment. And why not? Joe has a long, slimy history of corruption while in office. As vice president of the United States, he besmirched the responsibilities and protocols of his office. The numerous times he he engaged in pay-for-play schemes, with his son Hunter as a front man, has been well documented.

As President, however, Biden would have to make some kind of huge, instantaneously transgression to justifiably be impeached.

Pelosi and the Democrats, suffering from a totaling crippling case of Trump Derangement Syndrome, can’t see past their own hatred as to the long-term harm they do to America.

Democrats and the impeachment trial is violating the Constitution. Right to a fair trial? We have a trial judge that is part of the Democrat power in the Senate. Cut and chopped public videos–missing part of the statements that should be there. Come on Man?