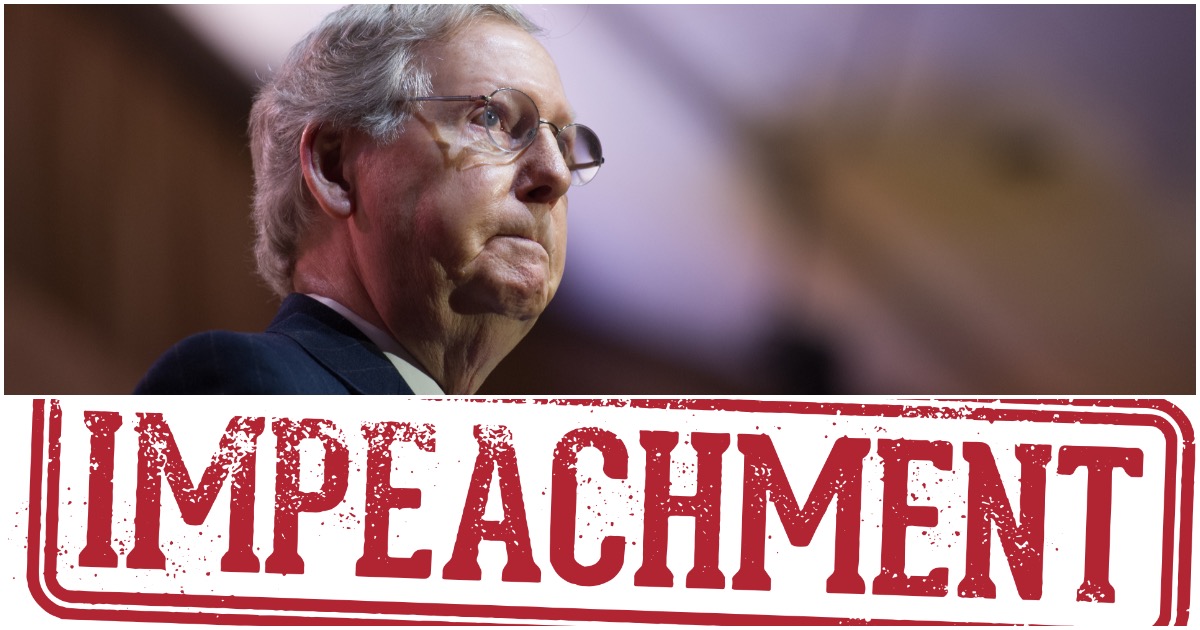 The following article, McConnell Sends Memo to Senators Regarding Procedures for Second Trump Impeachment, was first published on Flag And Cross.

Seemingly everybody in the GOP who holds elected (or appointed) office is, has, or will turn on President Trump. They love him when he helps them win elections, but not really at any other time.

Now that POTUS is leaving 1600 Pennsylvania Ave., a lot of people have decided to pounce on the one-term leader.

Mitch McConnell hasn’t always been Trump’s biggest supporter, but hopefully he stays strong enough to ensure the man gets to survive in office until January 20. He deserves that much after all he has done for the nation.

Outgoing Senate Majority Leader Mitch McConnell (R-Ky.) on Friday circulated to colleagues a memo outlining the procedure for holding another trial for President Trump if the House impeaches him for a second time in just over a year.

The document, which was first reported by The Washington Post, lays out how the Senate would proceed if the House approves articles of impeachment and transmits them to the upper chamber before or by Jan. 19, when senators are scheduled to resume regular business after the January recess.

McConnell says the most likely scenario if the House impeaches Trump in his final 12 days in office is for the Senate to receive a message from the lower chamber notifying it of the action on Jan. 19. That would then give the Senate the option of ordering the House managers to present those articles on the same day.

Senate Impeachment Rules require that at 1 p.m. on the day after the managers exhibit the articles, the Senate “must proceed to their consideration,” the memo states.

"Franklin Roosevelt set a day aside that will live in infamy. Unfortunately, we can now add January 6, 2021 to that very short list of dates in American history that will live forever in infamy." pic.twitter.com/mVMrVbuxQ8

These politicians, leaning more to the Democrats, are seeking impeachment again. There are 74 million people plus that are on the edge already. More on the edge then those “Rome” politicians realize. This country has already seen the rise of discomfort of the election. However, when these politicians keep pushing against Trump, there will be more of a face off. This is really sad for our country. But these folks are still stirring the pot. Let Trump make his peaceful transition. HOWEVER, I see this man not stopping after the inaugeration.

RINO McCONNELL is one more anti Trump SOB we must kick him out of our Gov for he to has big connections with China mainly his wife and her businesses over there.