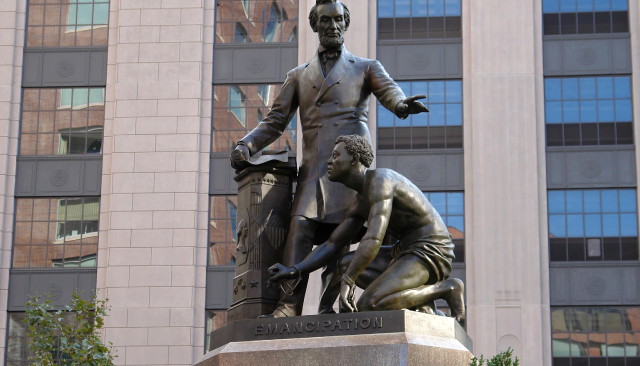 The following article, City Of Boston Decides To Chuck Statue Of Lincoln Emancipating Slave, was first published on Flag And Cross.

The Boston public arts commission voted unanimously over the summer to remove a statue located in the city’s downtown area that featured President Abraham Lincoln emancipating a slave.

It has now come down.

Folks, the left is desperate to erase the history of our great nation, all in the name of political correctness. At first, this was all about pulling down statues of Confederate soldiers and generals. Now they’ve come for the heroes too.

They are rewriting our past so they can influence the present in order to gain control of the future.

“The decision for removal acknowledged the statue’s role in perpetuating harmful prejudices and obscuring the role of Black Americans in shaping the nation’s freedoms,” the commission said in a statement.

Boston’s Democratic Mayor Martin Walsh praised the commission’s decision over the summer, saying, “After engaging in a public process, it’s clear that residents and visitors to Boston have been uncomfortable with this statue, and its reductive representation of the Black man’s role in the abolitionist movement. I fully support the Boston Art Commission’s decision for removal and thank them for their work.”

“The Mayor’s Office of Arts and Culture and the Boston Art Commission began a public engagement process over the summer that led to the decision to remove and relocate the Emancipation Group statue. … As expressed by so many during the public process this year, we fully agree that the statue should be relocated to a new publicly accessible location where its history and context can be better explained. The statue is being stored in a controlled storage facility in South Boston until a new location is determined,” a spokesperson for the mayor’s office said.

What’s ironic about this is that this statue is a copy of one that was originally erected in Washington, D.C., in 1876, during a ceremony that featured a little speech from Frederick Douglass.

So why in the world did these folks want to remove this statue? Well, with all of the civil unrest that’s happened this year due to the death of George Floyd — you know, all the rioting, looting, and killing people — many individuals were offended by the fact that a black slave was kneeling before Lincoln.

Things got so intense over this that the National Guard was called in to place barriers around the version of the statue in Washington.

Another bit of irony is that the original statue was actually paid for with money that was donated by freed slaves. Archer Alexander, a slave who fled from captivity and served in the Union, was the model for the statue.