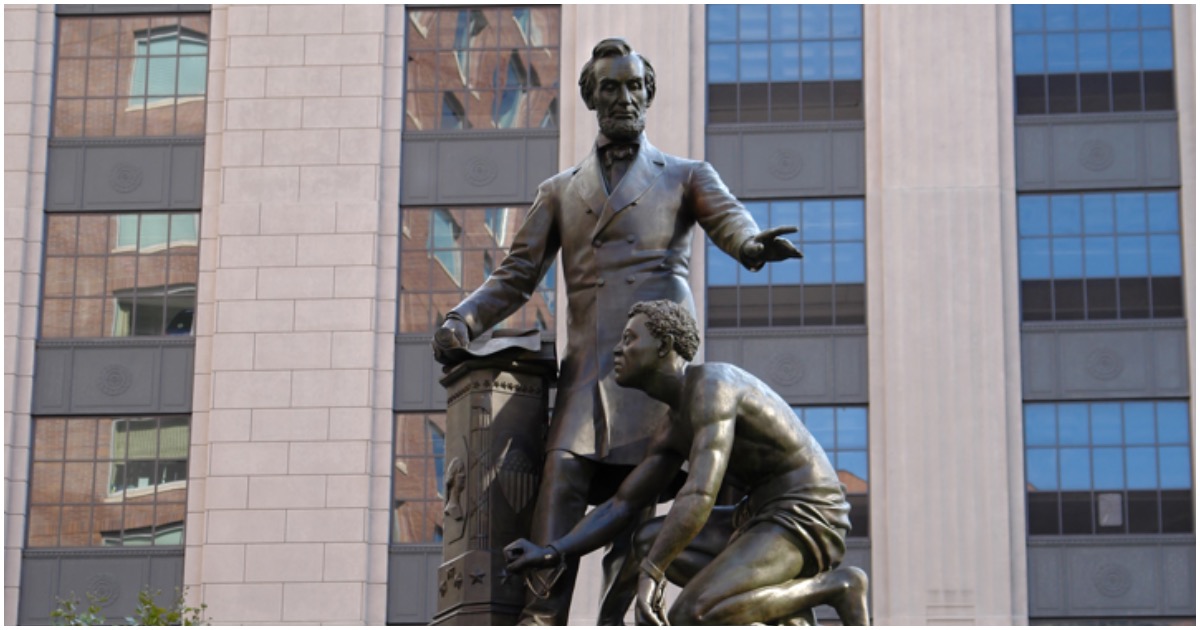 The following article, Statue of Abe Lincoln Freeing A Slave Has Been Removed By the City of Boston (Details), was first published on Flag And Cross.

President Trump said they would come after people like Abraham Lincoln and America’s Founding Fathers. He was right, as he generally has a knack for predicting the future.

What’s next? Will they rip down the Lincoln Monument in DC?

The funniest part is that the left never go after FDR, a far-left president whose administration forced Asian-Americans into interment camps during WWII.

A statue of Abraham Lincoln freeing a slave has been removed in downtown Boston.

“The decision for removal acknowledged the statue’s role in perpetuating harmful prejudices and obscuring the role of Black Americans in shaping the nation’s freedoms,” the Boston Art Commission said in a statement posted on its website.

Known as the Emancipation Group statue or the Freedman’s Memorial, the statue has been in place near Boston Common since 1879 and depicts Lincoln standing over a newly freed slave, Archer Alexander. An inscription on the statue reads, “A race set free/and the country at peace/Lincoln/Rests from his labors.”

“The Mayor’s Office of Arts and Culture and the Boston Art Commission began a public engagement process over the summer that led to the decision to remove and relocate the Emancipation Group statue … As expressed by so many during the public process this year, we fully agree that the statue should be relocated to a new publicly accessible location where its history and context can be better explained. The statue is being stored in a controlled storage facility in South Boston until a new location is determined,” a spokesperson for the mayor’s office said.

Whenever you hear a Democrat attempt to talk about America’s past, you have to figure what they’re going to say is riddled with lies.

It’s as if they think they’re making a conservative look bad by mentioning the shortcomings of a prominent Republican figure from the past, but more often than not the story is bogus.

Remember the line Kamala Harris dropped at the VP debate about Lincoln?

It was complete BS.

Kamala lied her face off. Read about it at this link.

Continue reading: Statue of Abe Lincoln Freeing A Slave Has Been Removed By the City of Boston (Details) ...

Boston has it’s political head up it’s ass . They could screw up a free lunch .