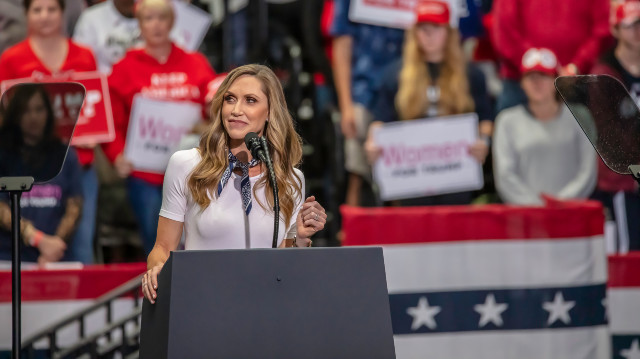 President Donald Trump’s daughter-in-law dropped a few hints that she might be considering a Senate run in the state of North Carolina during a couple of appearances on Fox News and Fox Business on Wednesday.

Lara Trump, wife of the president’s son, Eric Trump, said, “Let’s get through this one, and then we’ll talk about the next one,” after being asked when she might decide to run.

“It would be an incredible thing. It’s my home state, a state I love so much, and look, I think we need some strong Republicans in Washington, D.C. We had a great run with the Senate and the House this go around but, I don’t know, let’s see what happens,” she said.

“I was born North Carolina, it is my home, my team still lives there,” Trump said when asked if she would run for office in the state. “It’s something that I certainly have considered. I think it’s a little too soon to make an ultimate decision on that, but, you know, it would be an honor to represent the people of my home state.”

North Carolina will have an open Senate seat in the 2022 cycle. Republican Sen. Richard Burr, who has represented the state in the Senate since 2005 and before that in the House for a decade, is retiring at the end of his term.

Trump also hinted at a run in the Fox Business interview after being asked whether the “verbal abuse” and criticism that her family has endured has made her want to avoid politics.

“It is a consideration that I think we all have to think about — would we ever want to put ourselves through all the things you just described?” She continued. “They have been absolutely brutal to every member of our family. They make up lies about us; they write completely unfounded stories about us,” Trump stated.

“We all have also seen the great side of things, which is that you can affect positive change for so many people by holding a position like the president has, by holding, you know, congressional or Senate seat. So many possibilities to make life better for people,” Mrs. Trump added. “Although they have, obviously, done everything they can to try to dissuade us from doing those things, possibly running in the future — look, I think we all know the really positive side, the way you can impact people’s lives, so I don’t think you can ever rule anything out.”

President Trump has endured more undue criticism and straight up verbal abuse than any other commander-in-chief in this country’s history. For the entirety of his first term he’s done battle against the deep state element in the government that has worked to sabotage his administration, plus dealing with the constant assaults from the media.

If Lara Trump does decide to run, here’s to hoping she keeps a strong support network around her to help deal with all of the negativity sure to head her way.