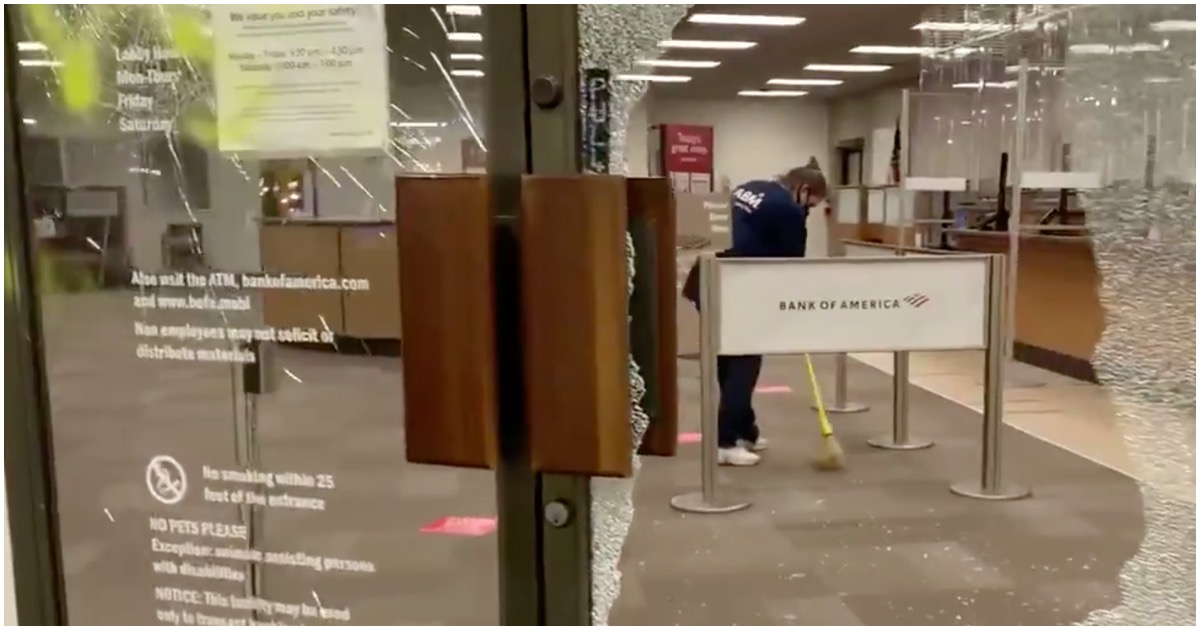 The following article, No Arrests Made After Over 100 Antifa Rioters Vandalize Portland Buildings — Details, was first published on Flag And Cross.

Democrats are the absolute worst. There’s no way to sugarcoat it. There’s also no point in doing so. They know they hate America and want to see her burn.

They know they’re immoral, Godless, uninformed lemmings – and they like it that way. All they have to do is pull out the racist card and they feel they’ve won an argument.

Where’s the logic in that?

If Joe Biden becomes president, what actions will he take against antifa? Can’t upset the radical base, right?

Reports from Portland, Oregon, indicate that police made no arrests of Antifa rioters who vandalized businesses on Friday night.

“This evening (Friday), a group gathered outside the Mexican Consulate in Downtown Portland,” the Portland Police Bureau tweeted. “The group was described as dressed in all black and wearing helmets. The group engaged in criminal behavior which included spray painting and vandalizing the property.”

Antifa organized two separate mini-riots tonight. One was publicly announced for downtown. It was meant as a decoy to fool police. There was another unadvertised one for vandalizing businesses along NE Sandy. @PortlandPolice didn't stop either one. #PortlandRiots #antifa pic.twitter.com/CO4iZgllt4

Tonight, a separate group of nearly 50 people gathered at NE Halsey St and NE 52nd Ave before moving to NE 43rd Ave and NE Sandy Blvd. As the group headed southwest on NE Sandy Blvd towards NE 40th Ave, they vandalized many businesses including many small businesses in their path pic.twitter.com/Oyc5RWlFOY

The Whole Foods on NE Sandy Blvd. in Portland was one of several businesses vandalized by antifa as part of their “day of rage” in support of trans people. #PortlandRiots #antifa pic.twitter.com/RMuENwTBr2

Antifa smashed up the Bank of America on NE Sandy in Portland and left another political message on the building. Video by @BridgetChavezTV. #PortlandRiots pic.twitter.com/RSKR8ZK7C4

Antifa used a shopping cart as a ramming tool to smash the glass on the Chase Bank in NE Portland. Video by @BridgetChavezTV. #PortlandRiots pic.twitter.com/J4IvbswBfE

As today is Transgender Day of Remembrance, protesters move tonight from The South Park Blocks to the Consulate of Mexico in Portland, before spray painting the building. This is after years of reports & data of discrimination towards women & the LGBTQ community in Mexico. pic.twitter.com/e1Y50ao3S3

Continue reading: No Arrests Made After Over 100 Antifa Rioters Vandalize Portland Buildings — Details ...

No more police? Would have to believe that the vigilante groups will soon come forth and those blm/antifa criminals will likely not be treated as gently as the former police officers treated them?? The criminals do not seem to realize that the police they hate so much was actually defending them….