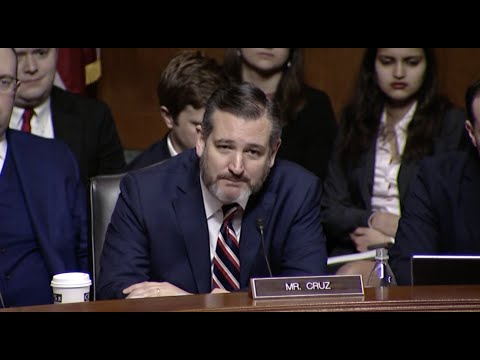 The following article, Ted Cruz Goes After McCabe, Accuses Him Of Being Leak Behind James Comey And Clinton Foundation Probe, was first published on Flag And Cross.

Texas Sen. Ted Cruz got into a very fiery exchange with former FBI Director Andrew McCabe, accusing the man of being responsible for the leak of information concerning an investigation into the Clinton Foundation to the media behind the back of then FBI-director James Comey.

Cruz asked McCabe if the disgraced former head of the FBI, Comey, had given him authorization to leak information about the investigation that was going on into the Clinton Foundation to the media.

“I didn’t ask if you needed it. I asked did he authorize you to disclose it. That’s a yes or no question,” the Texas Senator pressed. McCabe went on to say that he himself had given authorization for the disclosure.

Cruz continued to press until McCabe admitted that Comey did know about the passing of information to the press.

“Did he authorize you?” the Texas Republican asked. “I didn’t ask Jim Comey,” McCabe responded.

Ted Cruz getting in fiery exchange with Andrew McCabe about what James Comey knew and did in terms of authorizing the disclosure of the Clinton Foundation investigation to the press. McCabe argues Cruz's characterization of a leak is not accurate pic.twitter.com/7NZ8jfTzkk

“I’m not asking if you asked,” Cruz said, before pointing to a report in which McCabe insisted he’d told his boss Comey that he’d authorized a disclosure about the Clinton investigation.

“You’re aware your testimony is 180 degrees opposite from Mr. Comey’s sworn testimony to this committee in which he insisted he has never authorized anybody to leak to the press?” Cruz went on to ask.

“Your characterization of a leak is not accurate,” McCabe said.

“We did not open a case because we intended to stage a coup or overthrow the government,” the former FBI director said while delivering his opening statement. “We opened a case to find out how the Russians might be undermining our elections.”

Morgan Phillips, a reporter with Fox News, wrote in his report, “In 2018, the Justice Department inspector general’s report faulted McCabe for leaking information to then-Wall Street Journal reporter Devlin Barrett for an Oct. 30, 2016, story titled “FBI in Internal Feud Over Hillary Clinton Probe.” The story, written just days before the presidential election, focused on the FBI announcing the reopening of the Clinton investigation after finding thousands of her emails on a laptop belonging to former Democratic Rep. Anthony Weiner, who was then married to Clinton aide Huma Abedin.”

Phillips went on to say, “That leak confirmed the existence of the probe, the report said, which then-FBI Director James Comey had up to that point refused to do. The report said McCabe “lacked candor” in a conversation with Comey when he said he had not authorized the disclosure and didn’t know who had done so. The IG also found that he lacked candor when questioned by FBI agents on multiple occasions since that conversation.”

McCabe worked at the FBI for 21 years. He became acting director back in May of 2017 after Comey got booted by President Trump.

Folks, it’s become quite clear that there’s a lot of corruption within the FBI that needs to be dealt with. Plenty of evidence has been uncovered to prove that a deep state was and probably still is at work against the agenda of President Donald Trump.

Continue reading: Ted Cruz Goes After McCabe, Accuses Him Of Being Leak Behind James Comey And Clinton Foundation Probe ...

McCabe one of several fbi & doj that should be serving prison time.