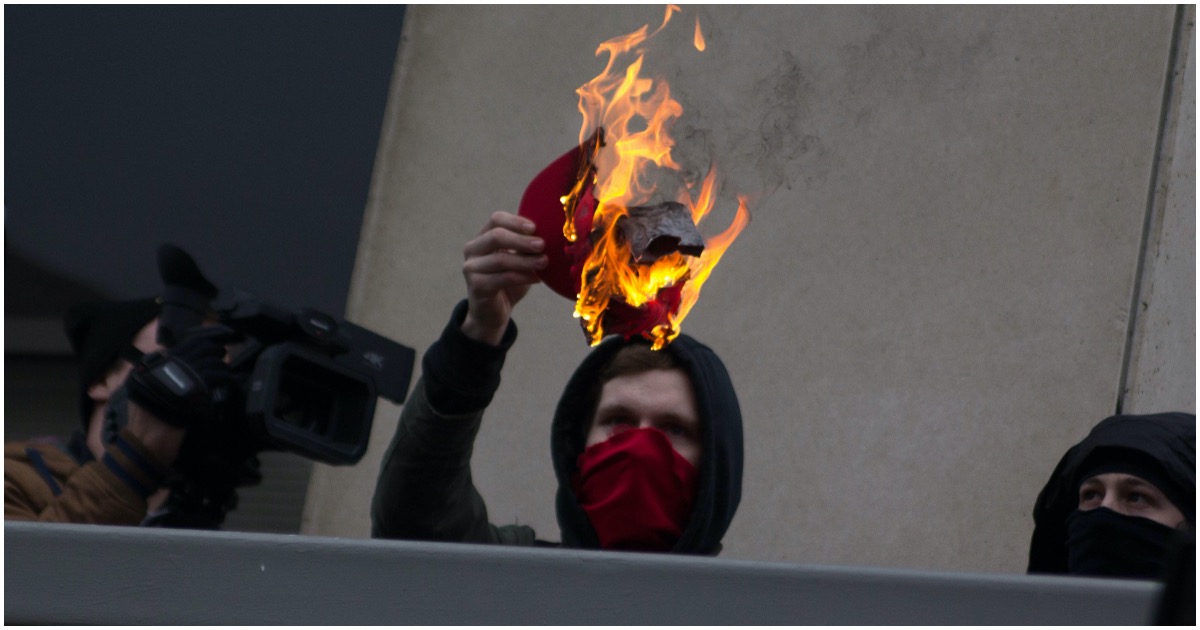 The following article, DAVIDSON: Plywood Nation — Is the Left Predisposed to Aggressive Behavior?, was first published on Flag And Cross.

As the plywood goes up on storefronts across America, a local observation might shed some light on the phenomena.

Carolyn resided in Florida and then Illinois before migrating to North Carolina. She speaks well, and is a committed Republican. In everyday life, Carolyn avoids squabbles with liberals, unless of course they cross the line, and then she gently but succinctly refutes their erroneous notions.

During this campaign season, she volunteered at voting precincts throughout the town of Cary North Carolina, at the Republican desk, handing out a card with the slate of GOP candidates. Cary, like parts of Raleigh, tends to be über-liberal, although there are some strong pockets of conservatives.

Another Day, Another Holler

Following her stint last Friday, I asked her “How did it go?” In her customary cheery tone, she told me it was fine. I asked her if there had been any rabble-rousers among those who do not favor the GOP. She reported that a few individuals made mild mocking gestures and glances, another two declared that they had no interest in literature from any GOP organization, and one man said, “F___ Trump.”

Her experiences on this day were typical: A smattering of those who disagree with everything Republican, and then one or two who mouth off, unprovoked. Republican campaign workers, we can presume, are used to it.

As an intellectual exercise, let’s reverse this scenario. Suppose that you are volunteering at the Democrat desk, handing out literature and the slate of Democrat candidates. Whether your stint is two to four hours or more, will anyone walk by and give you grief because indeed you’re working for Democrats? Will anyone make off-handed comments? It’s possible.

Now the telling moment: Will anybody say, “F___ Biden?” With all that has been exposed about Joe Biden, even Democrats, firmly ensconced in the mainstream media bubble, who never hear a whiff of Joe’s transgressions, realize that those on the Right don’t like him for many reasons.

Does anyone on the right verbally contend with a Democrat campaign worker by saying “F___ Biden?” If it happens, it’s got to be a rare event. Why? Do those who vote for conservatives have greater manners? Are they more reserved? Are they more respectful? Likely, yes, but it’s hard to point to statistical evidence.

Those who vote Democrat, and have no bones about voicing their contempt for Donald Trump, or others on the Right, invariably are under-informed, or self-righteous, or free-spirited, or prone to scatological language, or, all of the above.

What exactly is at the root of liberal incivility? Is it a universal phenomenon? For example, are liberals in France or Germany or Italy more prone to mouth off against the opposition than vice versa? Ann Coulter explains in her book, Demonic: How the Liberal Mob Is Endangering America, that liberals “exhibit all the psychological characteristics of a mob.”

A Propensity for Disrespect

Given liberals’ propensity to disrespect cultural heritage, customs, institutions, and, potentially, anything that came before them, they have a proclivity for chiding anyone with whom they disagree. After all, when you “know that you are right,” and you “know that the other party is completely wrong,” why would you deign to remain civil with them? Why would you engage in healthy debate? Why would you intelligently spare any words defending your views?

Moreover, when you have demonized the opposition party and its members, you give yourself permission to disrespect them and to verbally attack them, and perhaps physically attack them.

The violent protesters, the looters, and the outright criminals roaming the streets, in largely Democratic cities, are on the political Left. You’ll nary find a conservative in the bunch, unless they are present to counteract the misdeeds of those on the Left. This phenomenon is not exclusive to America. The same type of scenarios play out over and over around the world. The Left is predisposed to forming mobs and taking on mob mentality.

Each time Carolyn volunteered, the one or two individuals who say “F___ Trump” were, perhaps, but a step away from joining others of a similar mentality, and forming their own little mob. From there, who knows of what they are capable? However, we can all guess.