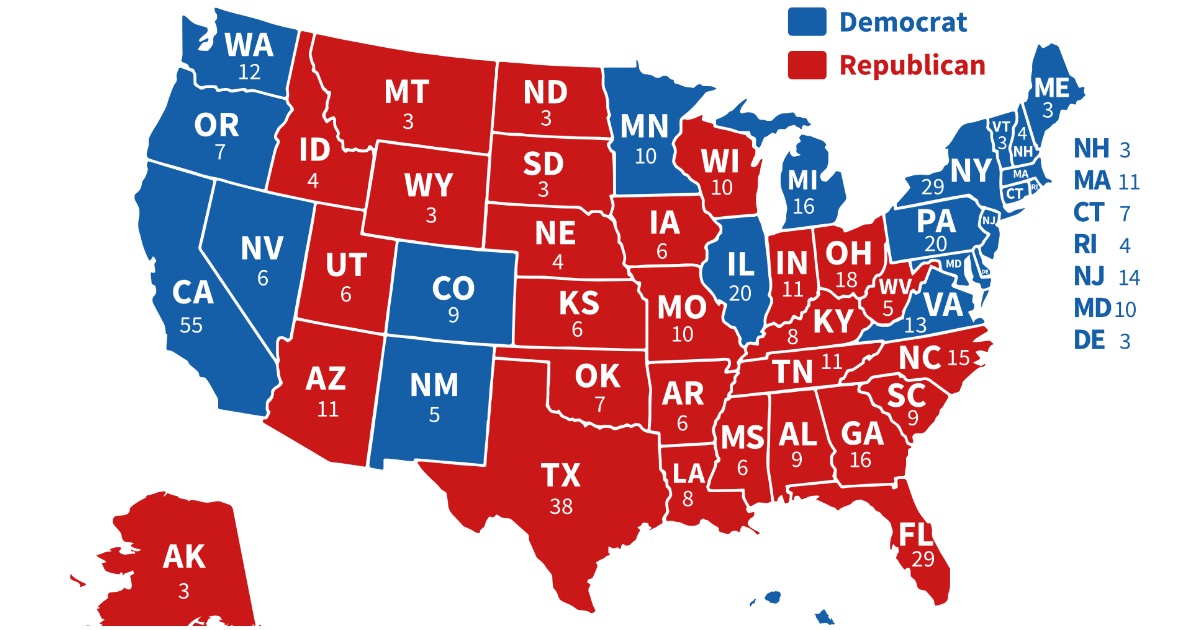 The following article, How the Electoral College Works (and Why It Matters) — An Opinion Piece, was first published on Flag And Cross.

The founding fathers created numerous checks and balances in order to prevent tyranny. This is why we separate federal and state government. It is why on each level, we separate the executive from the legislative and judicial. It is why we even subdivide the legislative branch into the House of Representatives and the Senate. The system would be far more efficient if we removed these barriers and just had one streamlined organization, but the founders understood that such a system would surely lead to a dictatorship.

For the same reasons, they complicated the electoral process. We do not live in a pure democracy. We live in a democratic republic where our elected officials are our voices in the lawmaking process. The founding fathers were no friends of direct democracy. In my doctoral dissertation research, I found no positive reference to direct democracy during the constitutional convention. Zero, None. The founders felt a direct democracy was as dangerous as an aristocracy.

The situation when the country formed also played a role in shaping the electoral college. The United States is a nation of independent nations. In fact the word state in the European context actually means nation. What Americans call a state, Europeans call a province. But the meanings are different because in our system, the states created the federal government and assigned to it specific, limited powers.

So, when thirteen nations got together to form one united nation, they were rightly concerned about how they would elect their leader. The smaller nations (e.g., NJ and DE) were particularly concerned that their views would be ignored by larger, more populous nations (e.g., NY and VA).

The founders worked out a compromise that would ensure that the executive would have to listen to the interests of each state while still providing roughly proportional weight to the votes of the states. They created a system where each state voted for the president independently and then each state, as a state, would cast their votes for the president based on the size of their population. Technically they vote for a slate of electors who will then vote for the president on their behalf. In Article II, Section 1, we read:

Each State shall appoint, in such Manner as the Legislature thereof may direct, a Number of Electors, equal to the whole Number of Senators and Representatives to which the State may be entitled in the Congress: but no Senator or Representative, or Person holding an Office of Trust or Profit under the United States, shall be appointed an Elector. (US Constitution, Article II, Section 1)

Each state with the exception of two (Nebraska and Maine) cast all of its votes for one candidate rather than provide a percentage of votes to the each and this is a critical component of the system. It changes the game. Forty-eight states and the District of Columbia engage in this winner-take-all process.

Because the President has to accumulate a simple majority (270 of 538 electoral votes), it forces him to appeal more broadly to a wider section of the country. Even then, because of the concentration of the population in certain major metropolitan areas, it is theoretically possible for a president to only campaign in the eleven largest states, ignore the rest of the country, and still win the presidency.

Because the largest states are divided (e.g., CA and NY are reliably Democratic while TX and GA are reliably Republican), such a disaster has been averted. One could hardly imagine a greater recipe for strife and discord.

There are 3,141 counties in the United States. In 2016, Donald Trump won 2,626 counties and Hillary Clinton won only 487 counties because of this concentration of Democrats in major cities.

To put this in perspective, without a system such as the electoral college that requires the president to listen to the rest of the country, it is conceivable that a politician could win an election by focusing on just a few thousand square miles in a country of 3,797,000 square miles. As you can imagine, the perspectives of city dwellers in New York, Los Angeles, Chicago, Houston, etc. may contrast sharply from those in the suburbs and rural America.

The election comes down to a division between a large number of safe states and a half dozen to a dozen swing states. So doesn’t that mean that the election only really matters in the swing states? Yes and No.

Swing states also change over time. Right now, Wisconsin is in play for the Republicans and Georgia is in play for the Democrats. The electoral college forces the future president to appeal to the interests of people in diverse places in order to accumulate enough electors to win the contest.

If the election is close and we have a repeat of the 2016 election, you can bet that there will be renewed calls to eliminate the electoral college. When one side complains that they lost the election even though they won the popular vote, here are key talking points:

1. Without the electoral college, minority voices would be overlooked as politicians appeal only to the largest massing of people in major cities.

2. The potential for fraud would be massive because fraud anywhere would be fraud everywhere. At least with the electoral college fraudsters have to commit fraud in the correct swing states to have an impact.

If you understand the system, you can help others understand how it works, and how it encourages the man we elect to listen to the entire country.

Dr. Darin Gerdes is a management professor at Charleston Southern University and the host of the Leadersmith Podcast. He wrote his doctoral dissertation on The Leadership Assumptions of American Statesmen During the Constitutional Convention and Ratification Debates, 1787-1789. Follow him on Twitter @DarinGerdes

Continue reading: How the Electoral College Works (and Why It Matters) — An Opinion Piece ...