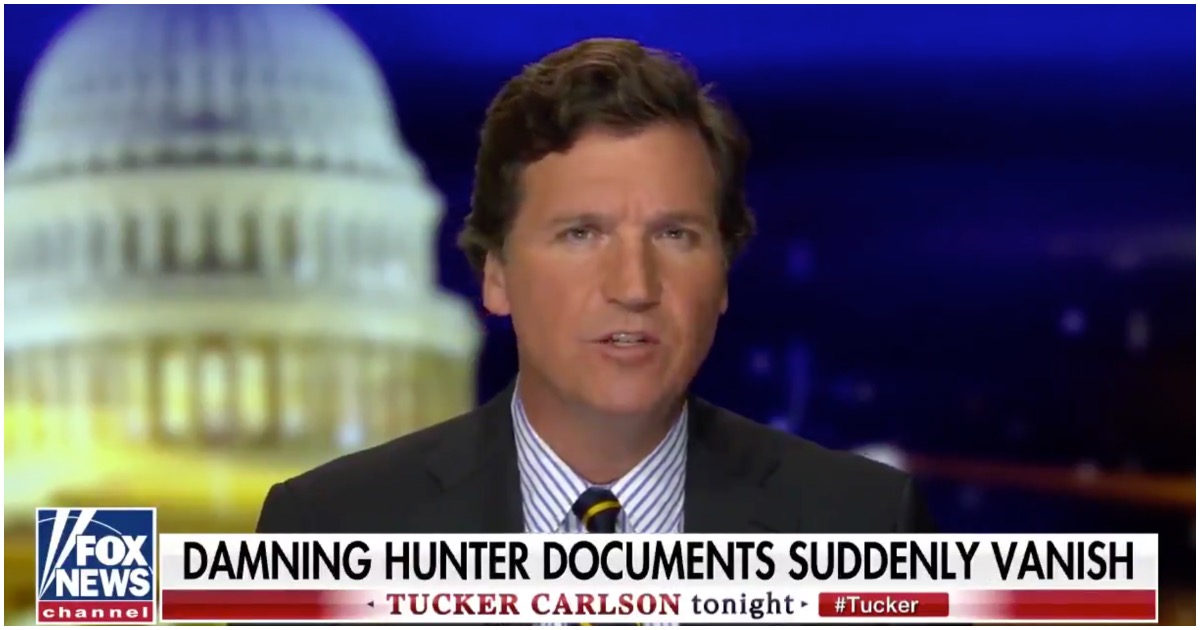 The following article, Tucker Carlson: ‘Damning’ Evidence Against Hunter Biden ‘Vanished’ After Being Sent To Me, was first published on Flag And Cross.

During his Wednesday evening show, Tucker Carlson dropped a bombshell regarding the Biden crime family. No need to chit-chat. Let’s just get right into it.

Tucker didn’t describe the documents other than to say they were damning, and that they came from a new source and related to the Biden crime family.

Tucker received word that the documents had been sent to him while he was in LA interviewing Tony Bobulinski for yesterday’s blockbuster interview. He asked his producer in New York to send them to him as quick as he could. Tucker said they used a very comment package courier, one that we would all be familiar with, but that the document never arrived.

Continue reading: Tucker Carlson: ‘Damning’ Evidence Against Hunter Biden ‘Vanished’ After Being Sent To Me ...

If, indeed, there was “shocking, damning evidence” about the Biden “family business” provided to Tucker Carlson (I don’t doubt there was), it is hard to believe they would ship the only copy ANYWHERE, without MAKING COPIES! What were they thinking, if they failed to make those copies, before allowing a “trusted” shipper (FedEX, UPS or some other “credible” shipper) to handle such sensitive information!

I trust Fox News and especially Tucker but this sounds very strange . Why would they ship the documents instead of scanning and sending them to Tucker ? Why didn’t the NY office copy them first , several times , and save them on a hard drive ? And didn’t the whistleblower make copies ?

Tucker is a treasure, but why, why, why, would anyone mail the only copy of a sensitive document? Something fishy here.