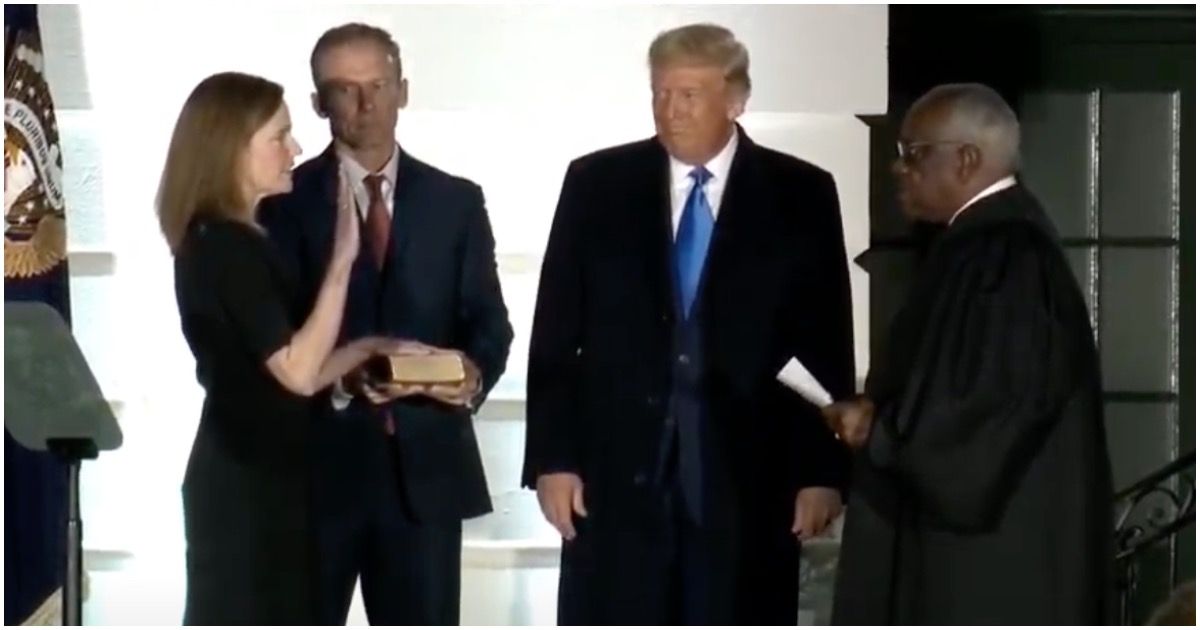 The following article, Amy Coney Barrett Confirmed to SCOTUS By 52-48 Vote, Sworn In By Clarence Thomas, was first published on Flag And Cross.

The thing President Trump may be known for when it’s all said and done (and also what he doesn’t get enough credit for) is reshaping the federal judiciary.

POTUS has appointed a heckuva lot of constitutionalists to the courts. America, obviously, is better off because of this.

On Monday evening, Trump’s third pick for the Supreme Court was confirmed and sworn in.

BREAKING: Amy Coney Barrett is confirmed to the Supreme Court in a 52-48 Senate vote https://t.co/N5sHKOlU5i pic.twitter.com/sJqUQRtEKH

Here are some liberal reactions…

Tonight Amy Coney Barrett will become the next Supreme Court justice of the United States.

Millions of people are about to lose their health care.

Roe v Wade is about to be overturned.

She shall be known as Supreme Court Justice Amy Phony Barrett. #ScotusSham #VoteThemOut

CNN and MSNBC chose not to air the historic vote in the Senate that confirmed Barrett as the 115th justice and only the fifth woman to the Supreme Court. The vote resulted in 52-48 with Maine Sen. Susan Collins as the sole Republican to join Democrats in opposition.

Both networks largely covered Barrett’s confirmation through the prism of the coronavirus outbreak with CNN anchors shaming the Trump administration for hosting a celebration at the White House following the previous event commemorating Barrett’s nomination, which has been widely referred to as a super-spreader based on the high number of attendees who were later diagnosed with the virus.

Justice has been served!

Oh, the irony. Can remember obama bragging as he said the “elections have consequences”.

The coonRAT party forgot that.