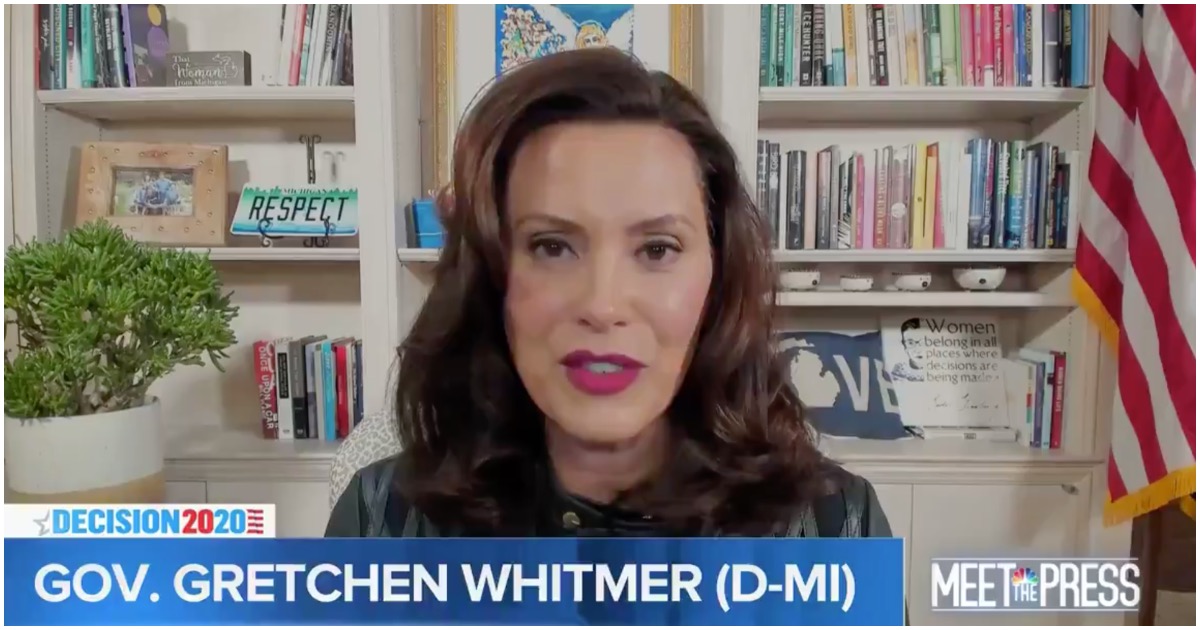 Donald Trump is the 44th man to hold the office of president of the United States. Grover Cleveland served two non-consecutive terms, making him the 22nd and 24th president. Therefore, Trump is #45.

When the term “86” is used, it’s usually implied to stop something.

But there’s also another, very aggressive, vicious meaning to “86.”

Michigan Democrat Governor Gretchen Whitmer was caught with an allegedly controversial sign in the background of an interview she gave on Sunday after claiming that chants of “lock her up” at a Trump rally were “incentivizing domestic terrorism.”

WATCH: Trump’s supporters chant “lock her up” at Mich. rally.@GovWhitmer: “Ten days after a plot to kidnap, put me on trial and execute me. Ten days after that was uncovered, the president is at it again. And inspiring and incentivizing and inciting … domestic terrorism.” pic.twitter.com/ipN3xvEbQ7

Now, check this out…

Conservatives noticed that during the same interview, Whitmer displayed an “86 45” sign in the background.

Governor Gretchen Whitmer displayed an "86 45" sign during her TV appearance.

86 can be shorthand for killing someone.

Whitmer is encouraging assassination attempts against President Trump just weeks after someone sent a ricin-laced package to the White House. pic.twitter.com/GzvtrjH40A

Leave it to Michigan Democrat Governor Gretchen Whitmer to have a pin in the background of her TV hit that says “86 45.”

Spare the nation the lecture with the “RESPECT” license plate. https://t.co/9DorHMSwJo pic.twitter.com/GR9Ob1IfTr

Even the leftist fact-checking website Snopes acknowledges that “86” can be used to mean “to kill.”

She is so full of lies and bologna. Trump had nothing to do with her attempted kidnapping- nor in people wanting to ‘lock her up’. Her own actions make people hate her.

Although feeling very sorry for all Michigan people having this evil excuse for a governor, have to express even more for the poor husband who must have to look at that scary face every day.

…And just days after Federal agents under HIS supervision saved HER life!