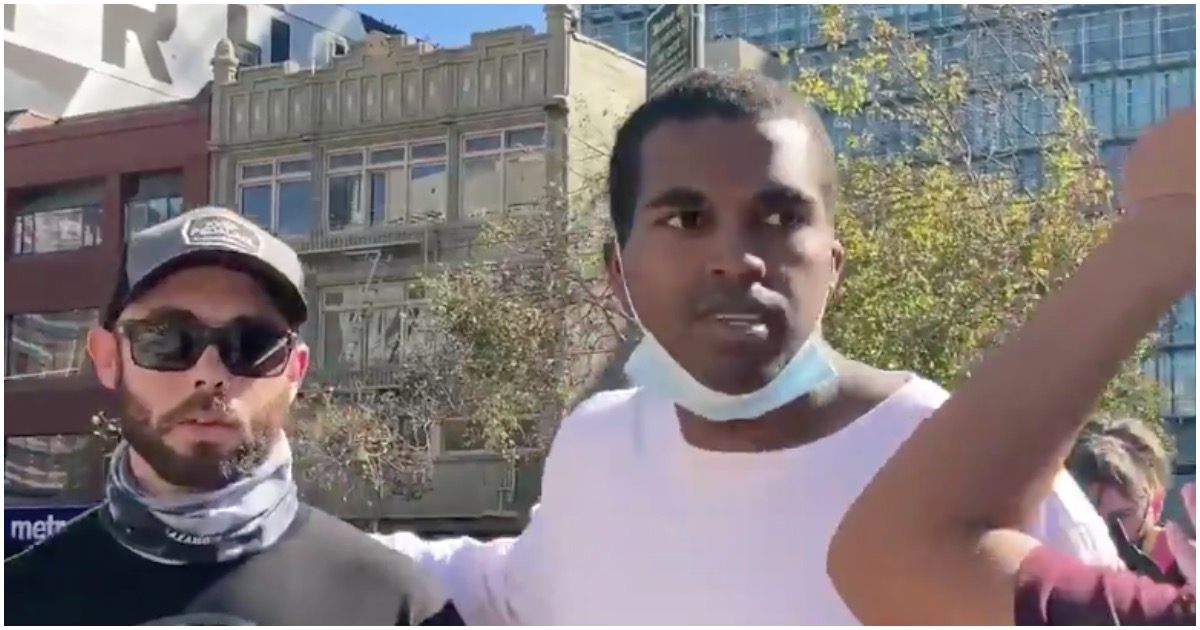 The following article, Black Man Beaten In Broad Daylight By Antifa Protesters Over Taking A Stand for Free Speech, was first published on Flag And Cross.

The hypocrisy of the left knows no bounds. They support black lives matter, yet do everything possible to stifle black conservatives – or anyone who goes against their point of view.

What liberals don’t understand is that they have become fascists, in that they attempt to shut down their political opponents.

What happens in the clips below shows just how ridiculous radical these future Joe Biden voters have become.

Something has to be done.

Philip posted his own message for Joe Biden…

Joe Biden, do you still think that Antifa is “just an idea” ? pic.twitter.com/UECmU39Tx6

Here are some more clips from the Saturday event…

BREAKING – Trump supporters reportedly attacked by #ANTIFA in San Francisco; evacuated from the scene in SFPD vans; at least 12 injured.pic.twitter.com/3gBJ3uEzef

as missile are hurled and antifa cowards verbally abuse him and the policehttps://t.co/1EyEg8YSKb

Antifa terrorists run off others trying to attend the rallyhttps://t.co/rQOaVqx8pP

Appears that the police are not responding to take care of these antifa criminals (also blm criminals) as they continue to attack Americans that actually are “peacefully protesting”. Is it the liberals in political control that are keeping the police from acting? If the police are not able or not being allowed, it may be time for some vigilante intervention?

The police either support or are afraid of Antifa. And we should support police? They protect the thugs, not the peaceful protester. Who protects the rights of the peaceful? No one! How many Antifa criminals got arrested?

In some cities such as Denver, the police have been ordered to stand down and not interfere with whatever BLM or Antifa happen to be doing.This is on orders from the Mayor or the Governor. It’s not that police do not want to protect lives and property, they have been ordered not to ! This is why so many of the are resigning and moving elsewhere.