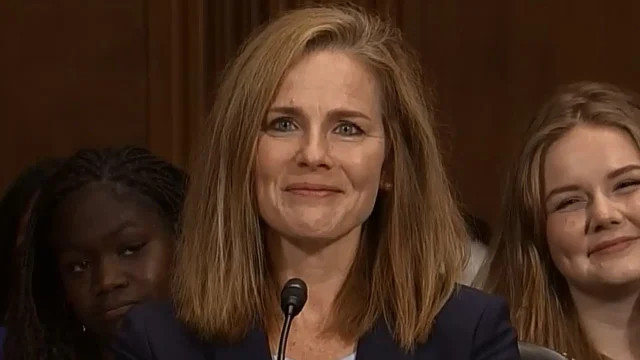 The following article, VIDEO: Democrat Senator Talks Down To Barrett, But She Fires Back: ‘I Assure You I have My Own Mind’, was first published on Flag And Cross.

During the third day of Judge Amy Coney Barrett’s confirmation hearing before the Senate, Delaware Democrat Christopher Coons kept on badgering the nominee about whether or not she would more or less ride the coattails of Justice Antonin Scalia and rubber-stamp his opinions.

At some point in the proceedings, however, it became clear that Barrett had had enough of the shenanigans and put Coons back in his place.

“I hope that you aren’t suggesting that I don’t have my own mind or that I couldn’t think independently, or that I would just decide, ‘Let me see what Justice Scalia has said about this in the past,’ because I assure you I have my own mind,” she said.

Coons started his attack by stating the predicate: “Judge Barrett, in accepting President Trump’s nomination to the Supreme Court, you stated you shared the judicial philosophy of Justice Scalia, your mentor, the justice for whom you clerked. His philosophy, is, of course, originalism, essentially, the idea that the authoritative meaning of the Constitution is what it meant when ratified, whether that was 150 years ago, 240 years ago, but meant when ratified.”

Coons posed his attack as a generous attempt to help the American people understand “what that originalist philosophy could really mean for their everyday lives,” as he continued:

And I think the American people need to better understand what that originalist philosophy could really mean for their everyday lives because I think it means that our entire modern understanding of certain constitutional commitments around liberty, privacy, and equality under the law could in fact be rolled back to 19thor even 18thcentury understandings in a way unrecognizable to most Americans.

“Many of these modern notions are rooted in a landmark case decided in 1965, Griswald v. Connecticut, where the Supreme Court held married couples have the right to use contraceptives in the privacy of their own home. In an interview just eight years ago in 2012 on Fox News, Justice Scalia said this decision was wrong, because under his originalist philosophy there’s no such thing as a general “right to privacy” in the Constitution. This is a question most currently serving justices have answered. When we spoke on the phone last week you said you couldn’t think of any specific issue of law where you disagreed with Justice Scalia. Do you agree with him that Griswald was wrongly decided and thus states should be able to make it illegal to use contraceptives if they so chose?” Griswald asked Barrett.

Barrett responded, “Well, Senator, as I’ve said a number of times, I can’t express a view, yes or no, A-plus or F —in my other capacity I get to grade, but not in this particular capacity with respect to precedent. I think that Griswald is very, very, very, very, very, very unlikely to go anywhere. In order for Griswald to be overruled you or a state legislature would have to pass a law prohibiting the use of birth control, which seems shockingly unlikely and then a lower court would have to buck Supreme Court precedent and say we’re not following Griswald. Again, seems very unlikely. So I think that it’s an academic question that wouldn’t arise but it’s something that I can’t opine on, particularly because it does lie at the base of substantive due process doctrine, which is something that continues to be litigated in courts today.”

“Well, just for the benefit of those watching, Judge Barrett, as I think you well know, your predecessors talked about Griswald in detail,” Coon stated again. “Chief Justice Roberts said he agreed with the Griswald court’s conclusion. He shared your view that he’s comfortable commenting because it doesn’t appear to be an area that would ever come before the court. Justice Alito, Justice Kavanaugh said essentially the same thing: that they’d agree. In fact, Justice Kagan, who you’ve been citing on the “no-grading,” said “I do,” that she’s willing to speak to it, and, as every nominee has, “I do support the result in Griswald.” I understand that you’re saying to us you’re going to be your own justice and that you’re very hesitant to talk about this case because it is an anchor to substantive due process, but let me just one more time say, “Are you unwilling to say, as so many currently-serving justices have, that at least Griswald is not wrong?”

Barrett, showing remarkable patience said, “I think Griswald isn’t going anywhere unless you plan to pass a law prohibiting couples or all people from using birth control. And I think the question, because it’s entirely academic, because it seems unthinkable that any legislature would pass such a law, I think the only reason that it’s even worth asking that question is to lay a predicate for whether Roe was rightly decided because Griswald does lie at the foundation of that line of precedent. So because Griswald involves substantive due process, an area that remains one, subject to litigation all over the country, I don’t it’s an issue, a case, that I can opine on but nor do I think Griswald is in danger of going anywhere.”

“And to be clear about what it underlies, it’s not just that Griswald was a landmark case, as you well know, it anchors a lot of modern liberty interests in personal and family autonomy. It was extended to unmarried couples in Eisenstadt, it was extended to the right for women to control their reproductive choices in Roe and in Casey, but it was also extended to support same-sex couple intimacy in Lawrence v Texas, ultimately that same-sex couples have the right to marry in Obergefell. The reason I’m taking a few minutes with this is that Justice Scalia publicly disagreed with or dissented in each and every one of these cases. He wrote in one of these decisions that it reflected the court adopting the so-called homosexual agenda and just last week, Justices Thomas and Alito issued an opinion stating the Supreme Court needs to fix problems from its holding in Obergefell,” Coons continued.

He then went back on the attack against Barrett:

“So I understand you’ll be your own justice and Justice Scalia’s philosophy is significant, but you’ve made it clear that it’s actually your philosophy, and I’m trying to help viewers understand what it means to replace a Justice Ginsburg with someone who may more closely follow Scalia’s approach. If Justice Scalia had had his way, we’d be in a very different country with regards to gender discrimination. In one of Justice Ginsburg’s most celebrated decisions in 1996, in the case involving Virginia Military Institute, she struck down their male-only admissions policy. Decades later, VMI honored Justice Ginsberg in recognition of the contributions its female alumni have made. Justice Scalia was the sole dissenter in that case, and even accused the court of destroying VMI, which remains standing and strong to this day. Now I’m just getting at how closely you would ally yourself with Justice Scalia’s jurisprudence. Would you agree with Justice Scalia that Justice Ginsburg’s decision in VMI was wrong?”

“Well, Senator Coons, to be clear, as I said I think in response to this question yesterday, I do share Justice Scalia’s approach to text, originalism and textualism, but in the litany of cases that you’ve just identified, the particular votes that he cast, are a different question of whether I would agree with the way that he applied those principles in particular cases. And I’ve already said, and I hope that you aren’t suggesting that I don’t have my own mind or that I couldn’t think independently, or that I would just decide, “Let me see what Justice Scalia has said about this in the past,” because I assure you I have my own mind. But everything that he said, is not necessarily what I would agree with or what I would do if I were Justice Barrett. That was Justice Scalia. So I share his philosophy, but I’ve never said that I would always reach the same outcome as he did,” the nominee replied.

This gal is not at all a pushover, and that’s got to be driving the left absolutely bonkers. Clearly, ACB knows her stuff. She’s highly educated, morally upright, a great mother, and an originalist who seeks to interpret the Constitution according to its original meaning.

Which means she’s an absolute danger to everything the Democratic Party stands for. And that’s why she deserves to be confirmed to the bench.

Continue reading: VIDEO: Democrat Senator Talks Down To Barrett, But She Fires Back: ‘I Assure You I have My Own Mind’ ...

This lady is do much smarter than the Democrats trying to trip her up! They have to refer to information their aides came up with and she answers off the top of her head! I love it!!