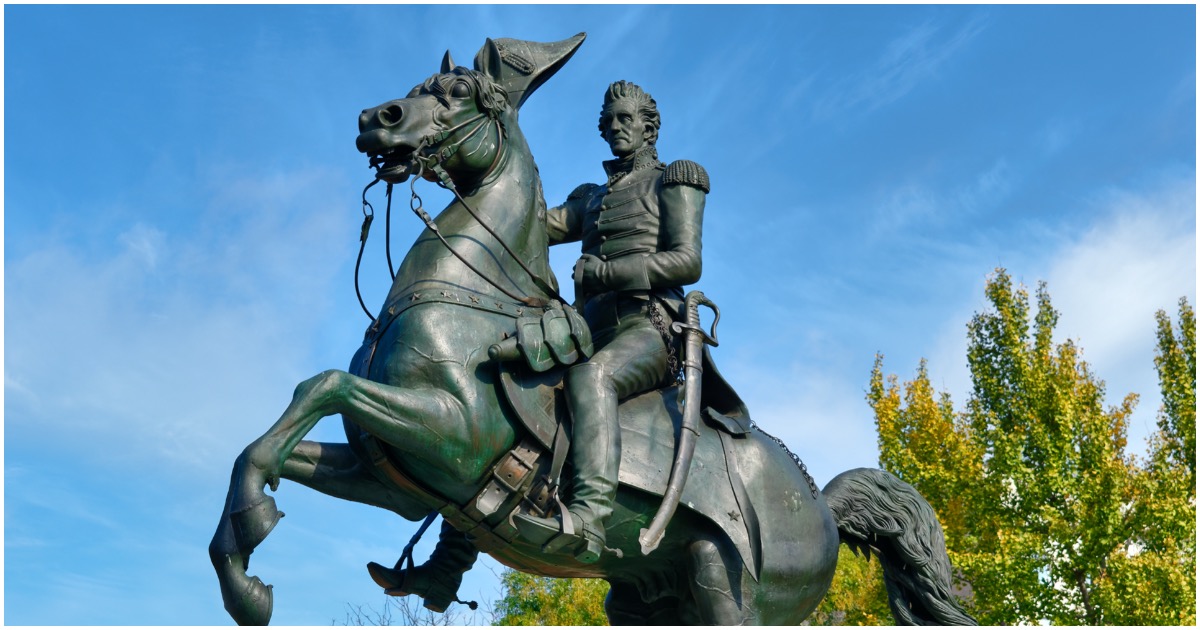 The following article, DAVIDSON: Witch Hunting Through History — An Opinion Piece, was first published on Flag And Cross.

It’s likely that some time around 2028, freedom pioneer Harriet Tubman could appear on the $20 bill. In her perilous role as a scout and spy for the U.S. Army during the Civil War, and as an abolitionist and humanitarian, she earned it. She would replace Andrew Jackson, a favorite target of some people who rail against his slave ownership, – perhaps totaling up to 150 people – while ignoring the context.

Nearly everyone in Jackson’s environment was racist at the time. What’s more, Jackson championed the Indian Removal Act that displaced nearly 46,000 Creeks, Chickasaws, Cherokees, Seminoles, and Choctaws from their ancestral lands. Because he ascended to the presidency, maybe it is time for him to vanish from our currency.

No-no’s as Seen from the Future

Suppose that Hispanics working in America today as house cleaners, maids, nannies, gardeners, and lawn keepers, 200 years from now, are regarded as having been exploited. What if 200 years from now, whatever deeds that Hispanic domestic exploiters otherwise accomplished, are looked upon with disdain. Not fair you say? “You don’t understand the context.” “We gave them employment, and we helped their families to prosper. It was all for the good.” Tell that to future ‘progressives.’

Who, besides Andrew Jackson, should be defamed? Let’s explore some other notables in American history and see what laurels should be stripped from their legacy. Martin Luther King, Jr. plagiarized vast sections of his doctoral thesis, as has been well documented by major liberal newspapers and even by the institution that honored him with his doctorate.

Boston University has admitted knowledge of the transgression, that MLK plagiarized large portions of his doctoral dissertation and that the university had knowledge of such plagiarism at the time. Yet, the decision was made to award him a doctorate. After all, he was an otherwise brilliant, promising student, and Boston University was pleased to have had him in its program.

One hundred out of one hundred other students in graduate school programs found to have plagiarized vast portions of their doctoral dissertations would be expelled from the respective programs: No doctorate, no graduation, no honors, in fact deep dishonor. Is it not fitting to strip Martin Luther King, Jr., posthumously, of the legions of awards and distinctions bestowed upon them?

Virtually every major metro area has a Martin Luther King, Jr. Blvd. Scores and scores of schools are named after him, not to mention community centers, libraries, and other civic and social institutions. Numerous scholarships are named after him. Indeed, MLK is revered as the foremost civil rights leader of our time: America celebrates his birthday in January, as a federal holiday, while stripping Abraham Lincoln and George Washington of such distinction, in favor of the little-acknowledged “President’s Day.”

Can someone who cheated his way to academic distinction be allowed, posthumously, to retain such honors?

“Not fair,” you say, to put MLK under the spotlight posthumously. Apples and oranges? Surely his brilliance was evident to everyone, and he made a distinct and positive impact on our culture.

It’s been said great men are not always good men and the corollary is true for women as well. If we’re going to go on a witch hunt of the famous men and women in history, and defame them when we find something heinous, or merely unpalatable, we might have no one left.

The transgressions of John F. Kennedy are legion. Besides being a serial philanderer, his constant patronage of prostitutes put him in the path of extortionists. He also initiated sex with White House interns (as young as 18) on numerous occasions. A former JFK intern, Mimi Alford, among many others, has documented his unforgivable behavior.

Yet JFK is still on the 50¢ piece and the so-named Kennedy Center for the Performing Arts sits un-mired on the Potomac River in Washington. The so-named JFK Airport in New York, JFK Federal buildings, schools, libraries, awards, and distinctions all named after him remain intact.

Good, Most of the Time?

What about Ted Kennedy? He was negligent in the suffocation death of Mary Jo Kopechne. Forensic evidence, suppressed at the time, reveals that she suffocated slowly; she did not drown. Ted Kennedy had time to save her, but waited an incredible nine hours before reporting the incident to the Edgartown authorities. A non-profit educational institution and museum founded in 2009 was named for him: the Edward M. Kennedy Institute for the U.S. Senate.

Years before Mary Jo, Edward Kennedy was concerned about his athletic eligibility at Harvard for the coming year. He arranged to have a friend sit in for him to take a Spanish language final examination. The ploy failed, and, unlike Martin Luther King, Jr., Kennedy was expelled. Nothing stopped a majority of voters in Massachusetts from continually re-electing him and enabling him to become the fourth longest serving senator in United States history, a tenure of nearly 47 years, ending with his death.

If you’re sincere in outing historical figures who are undeserving of posthumous accolades, consider J. Edgar Hoover. He became a life-long career criminal who, by the way, incessantly hounded Martin Luther King, Jr.

Hoover kept his post for decades by extorting one U.S. President after another. After all the revelations of Hoover’s lifelong propensity to break the laws that he was entrusted to enforce, why is the FBI building still named after him? If you can answer that one, we can get back to Andrew Jackson.