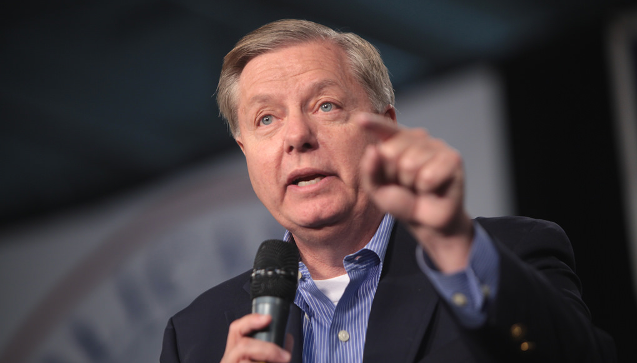 The following article, Hearing For SCOTUS Pick Amy Coney Barrett Kicks Off Amid Pleas For Civility From Graham, was first published on Flag And Cross.

The Senate Judiciary Committee, headed up by Sen. Lindsey Graham, is officially kicking off its hearing on the nomination of Amy Coney Barrett to the Supreme Court, where if she’s appointed, she will take the seat left vacant by the passing of Justice Ruth Bader Ginsburg.

Graham kicked off the proceedings with a plea for both sides to remain as civil as possible, though Sen. Dianne Feinstein has promised Democrats will grill Barrett over her stance on whether or not the Affordable Care Act is constitutional.

The socially distanced hearing is nothing like any Supreme Court hearing in the past, with the nominee wearing a black face mask in the television split-screen as senators gave their opening statements. Some senators are beaming in virtually as they aim to remain safe from the coronavirus pandemic.

The hearing room, in the past, has been abuzz with hundreds of observers and the occasional outbreak of a protest leading to arrests by the Capitol police. Instead on Monday, the hearing room under strict coronavirus protocols is nearly silent outside of the senators who are speaking.

“This is going to be a long contentious week,” Graham said in his opening statement. “Let’s make it respectful, let’s make it challenging, let’s remember the world is watching.”

What’s Graham referring to here? He’s likely talking about the confirmation hearing of Justice Brett Kavanaugh which got very ugly as Democrats attempted to paint him up to be some sort of sexual predator. Those attempts failed. Miserably.

Feinstein said, “I believe we want this to be a very good hearing,” and went on to state she would do her best to help make the hearing civil as possible, just as Graham requested.

Let’s see if she holds true to her words.