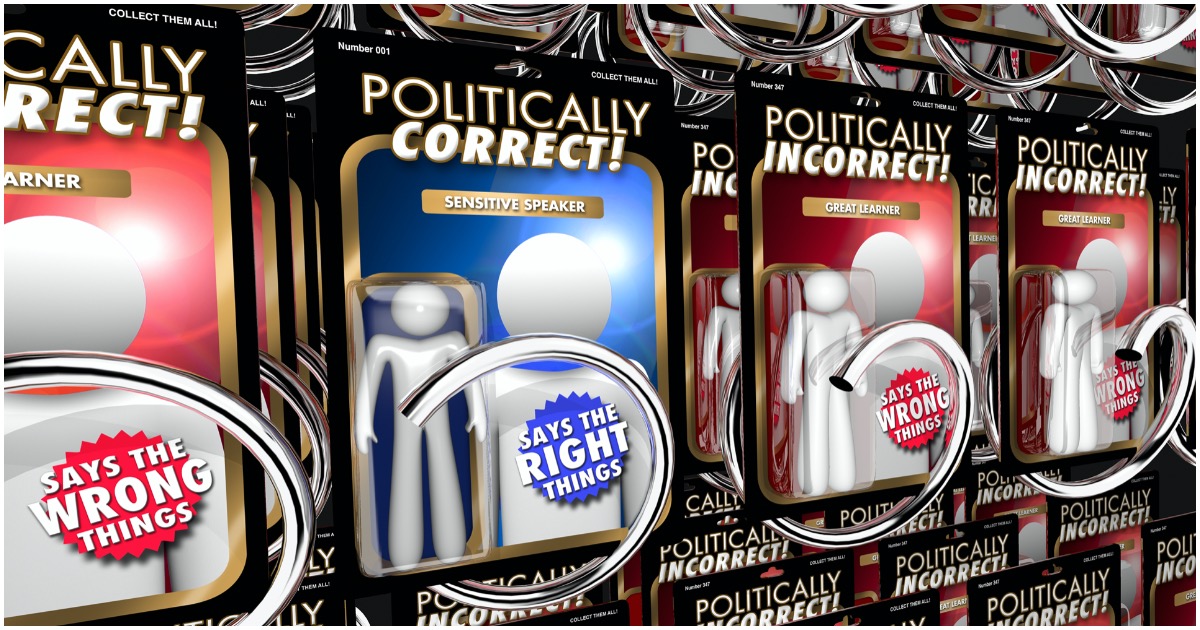 The following article, DAVIDSON: Politically Correct Language For Thee, But Not For Me — Opinion, was first published on Flag And Cross.

Perhaps Donald Trump’s greatest appeal to huge masses of people at his rallies (peaceful protests) and in the voting booth is that he is so non-politically correct. Meanwhile, since early spring, the Left has taken stronger control of public discourse and is enforcing an extreme ‘political correctness’ edict. To raise issues, for example, with the activities of BLM or Antifa is to gamble with your career, perhaps get beaten to a pulp, and possibly be murdered on video.

What is Correct About It?

If only ‘political correctness’ (PC) was useful to society in some way. Instead, it is employed as a cultural catapult used by certain groups who eagerly seek to:

PC enforcers require that everyone else think and behave as they direct. PC is a major tool to immobilize otherwise conscientious government officials and to keep them from doing their jobs effectively, such as upholding the U.S. Constitution and protecting U.S. citizens. As a prime example: ’Sanctuary cities,’ and the city government officials and agents within them, are clearly at odds with the U.S. Constitution, a document which delineates protections for U.S. citizens.

Janet Napolitano, Secretary of Homeland Security in 2009, chose to no longer mention the word “terrorism,” especially following egregious acts of terrorism within U.S. borders. She told a journalist, following her maiden testimony on Capitol Hill, that she is fully aware of terrorism threats, however, she prefers to rely upon the term “man-caused” disasters. Let that sink in.

PC equates to nothing less than thought-control. It thwarts needed inquiry into the questionable activities of certain individuals. As such, PC is deadly. In 2015, many individuals noted the odd activities and behavior of a San Bernardino Islamic couple, who later proved to be mass murderers. Observers of the couple reported that they consciously avoided citing them to authorities because of their Islamic, minority status.

Obama’s Department of Justice coined new terminology for convicted criminals in April 2016. Convicted criminals were now to be regarded as justice-involved individuals. Youthful offenders were renamed as justice-involved youth. Such language contortion is a Big Brother type of activity. Change the language, and you can control thought. Think: Pro-choice rather than pro-abortion, although somehow the choice is invariably is abortion.

In June 2016, in Orlando, it turned out that an Islamic mass murderer was known in advance, by many other people, to be unhinged and perhaps violent. Oops, too late! 49 people died, many more were seriously injured, and a town, state, and nation were in shock. Following the Orlando massacre, the verbally fascist Obama Administration decreed that the U.S. Department of Homeland Security, the Department of Justice, and other federal agencies be barred from employing the terms “jihad” and “Sharia.”

A mere word, in a short tweet, or a comment that one made 40 years ago, which today is unacceptable to the ‘woke’ crowd, can imperil one’s career. Is it any wonder that PC is among the great curses of our contemporary society?

How exactly is PC employed as the go-to tool of domination? The tenets of PC are that Caucasians, principally western males, are the embodiment of oppression. Their views, behaviors, and actions inherently are wrong simply because they are Caucasian, western males. PC vocabulary, such as “mansplain,” “white privilege,” and “micro-aggression” is designed to diminish and squelch the observations, experiences, rationale, and worthiness of the presumably non-conforming opposition.

PC contends that minority individuals, amazingly, can do little wrong, because they are minorities. The consequences of their behavior, even violence, are excusable. Consider the late Michael Brown of Ferguson, Missouri. By age 18, he had a sealed juvenile rap sheet. It has been proven with ample evidence that he did not put his hands up and he never said the words, “Don’t shoot,” prior to his demise.

PC advocates grant the Michael Browns of the world a de facto pass in the face of their socially destructive behavior. Why? Obviously, such individuals are the “continuing victims” of the Caucasian, western male-dominated society.

PC advocates, however, have no problem besmirching the following with the foulest of language: Caucasian supreme court nominees if the are Republican, and especially if they are women, or so many articulate African Americans such as Candace Owens, Ben Carson, and the late Herman Cain, among numerous others. So, it is a case of PC language for thee, but not for me!

Someday, may your descendants dwell in an era when ‘political correctness’ has been driven out of society.

Continue reading: DAVIDSON: Politically Correct Language For Thee, But Not For Me — Opinion ...