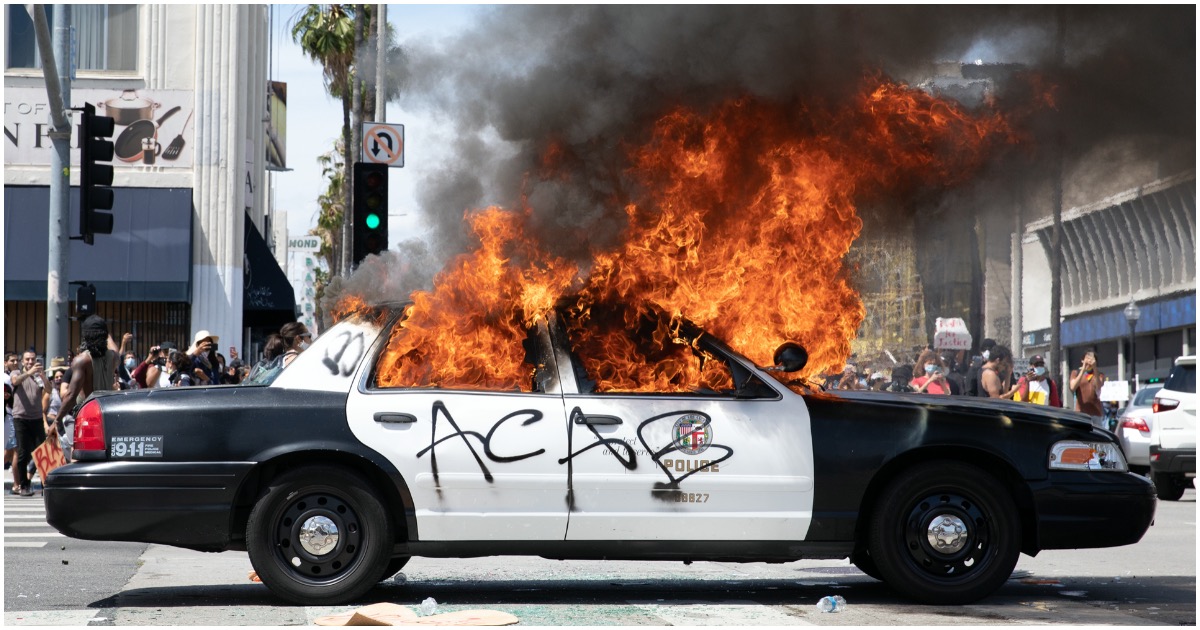 The following article, Democrats: The Party of Organized Violence — An Opinion Piece, was first published on Flag And Cross.

As an avid world traveler, I have found myself in many dicey situations. While eating dinner in Cartagena, Colombia, my table was surrounded by armed troops who, at the point of a rifle, demanded that I empty my pockets and remove my shoes. Needless to say, it ruined my appetite. In Nairobi, Kenya, I was nearly decapitated by a group of soldiers when I attempted to take their photo at the airport. I can still see their angry, snarling faces. In Berlin, Germany, I was almost arrested by secret police after neglecting to validate my ticket while boarding a train. On each of these occasions, the first thought that occurred to me was how fortunate I am to live in the US—where we are safe. Those unnerving experiences could never happen here. Think again.

This year, our nation descended into rampant lawlessness. We have watched cities and towns ravaged by marauding mobs of crazed leftists. Hundreds of businesses, the result of years of struggle and sacrifice, were utterly destroyed. Buildings were looted and burned. Statues were torn down. Innocent people were beaten and murdered. The laissez faire attitude toward rioting has encouraged all other forms of felonious activity. You are much more likely to be robbed, beaten, shot, or raped than you were a year ago.

With the complicity of Democratic mayors, police are told to stand down and allow the violence to continue. When criminals are arrested, they are released without bail so they can repeat their offenses. Prosecutors refuse to prosecute the criminals. “Left-wing mega-donors like George Soros realized it’s easier to install radical DAs than it is to convince the public to let their own cities burn,” said political commentator Tucker Carlson. “Soros has worked hard to elect district attorneys who will nullify laws against rioting and violence by failing to enforce them. The people whose job it is to make you safe are instead making it easier for criminals to terrorize your family. That’s not an accident.”

The worst example of lawlessness is New York City. The greatest city in America and the world has been destroyed. It will take ten years to restore it, which may not happen at all because people don’t want to live there anymore. Why would they? Last week, 101 people were shot in the Big Apple, nearly four times as many as the comparable period last year. The city’s criminally irresponsible mayor has encouraged looting, ordered violent criminals to be released from Riker’s Island prison, and abandoned the populace to the brutal mercy of hooligans and thugs. “Most living Americans” have never witnessed similar incidents of violence, said Tucker Carlson. “Now, they’re common all over the country. What happened?”

What happened is that the Democratic Party has embraced violence as its modus operandi. All of the cities experiencing the recent rash of violence are run by Democrats. You don’t see Republicans engaged in organized violence. Uncivilized behavior is a monopoly of the Left. “It’s leftists who are chanting ‘death to America,’” David Harsanyi wrote in National Review, “not MAGA-hatted shock troops.” Ted Van Dyk writes in the Wall Street Journal that, “The pretense of peaceful protest is rapidly disappearing. Deaths, serious injuries, arson, public and private property damage, and economic dislocation have resulted.”

The Democratic Party has sent a message to its adherents that anything goes in the pursuit of political power. Democrats will not hesitate to deprive you of your basic rights if it suits their purpose. “[Democratic Party] leaders, from Barack Obama to Seattle Mayor Jenny ‘Summer of Love’ Durkan gave the green light to anarchy,” wrote Miranda Devine in the New York Post. “Obama, the one man who could have made a difference, used his convention speech actually to praise ‘the young people who led us this summer.’”

No matter where you live, liberal mobs will see to it that you can’t express conservative ideas in public. If you decide to wear a MAGA hat, you place yourself at risk of assault. If you refuse to bow down to the demands of Black Lives Matter and Antifa, they will burn your house to the ground with you in it. One of my neighbors told me she is afraid to display an American flag in front of her house. This is not the same country we grew up in.

We haven’t seen the worst of it. “If this country doesn’t give us what we want,” said a Black Lives Matter spokesman, “then we will burn down this system and replace it.” The Democrats are promising more violence if Trump is re-elected. “Democrats’ new strategy for winning the White House: Threaten riots if they lose,” warned Jonathan S. Tobin in the New York Post. “They are counting on a strategy to scare Americans into voting for Biden.” Financial support from leftist billionaires will ensure that recruits are available for more looting and burning and who knows what else. “The extreme left appear to have no intention of backing down,” wrote former OMB official J.T. Young in Investor’s Business Daily, “but expecting—if not demanding—the establishment’s embrace.”

Twenty years ago, I never would have considered living anywhere but the US. Now I’m beginning to think that it might be safer in another part of the world. Is it time to plan an exit strategy in case the Democrats take back the White House and the Senate? We have a right to feel confident that the government is capable of protecting us. Thanks to the Democrats, that confidence is slipping away.