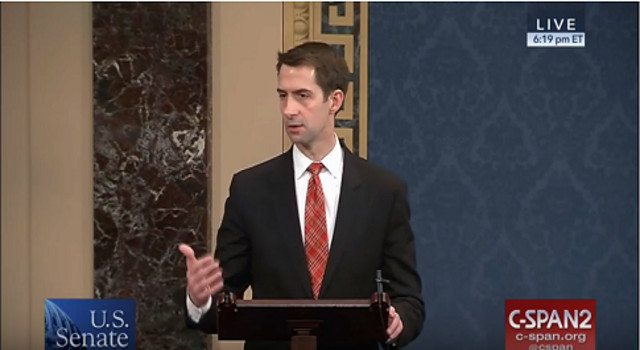 The following article, Tom Cotton Weighs In On Filling RGB Seat: Democrats Who Voted For Kavanaugh Won Reelection; Those That Didn’t, Lost, was first published on Flag And Cross.

Sen. Tom Cotton made a very good argument for why Democrats should vote in favor of filling the SCOTUS seat left vacant by the death of Ruth Bader Ginsburg, by pointing out that those Democrats who supported Kavanaugh got reelected, while those that voted against him didn’t.

This is a great strategy. What most Democrats want more than anything is to do maintain power and stay in office so they can get paid to do nothing, and they are willing to do whatever it takes to do so. Cotton knows that, hence, bringing up this very valid point.

“In 2014, the American people elected a Republican majority to the Senate to put the brakes on President Obama’s judicial nominations,” Cotton said during an interview on Fox News. “In 2018, we had a referendum on this question, just a month before the 2018 midterms. We had the vote on Justice Kavanaugh. There could not have been a clearer mandate because the American people didn’t just re-elect Republicans, they expanded our majority. They defeated four Democratic senators who voted against Justice Kavanaugh. They re-elected the one Democratic senator who did vote for Justice Kavanaugh.”

Cotton later added that people should not “discount Democratic votes either” in the upcoming hearings after President Donald Trump announces who he is nominating to the nation’s highest court.

We absolutely need to make sure that a true, pro-life, conservative appointee is confirmed and placed on the Supreme Court, as soon as possible, because there are literally lives at stake in this. The lives of the unborn deserve our protection, and the best way to do that is to stack the Supreme Court with judges who will help overturn Roe v. Wade.

Here’s to hoping we get to see that happen now, with the appointment of yet another judge by President Trump.