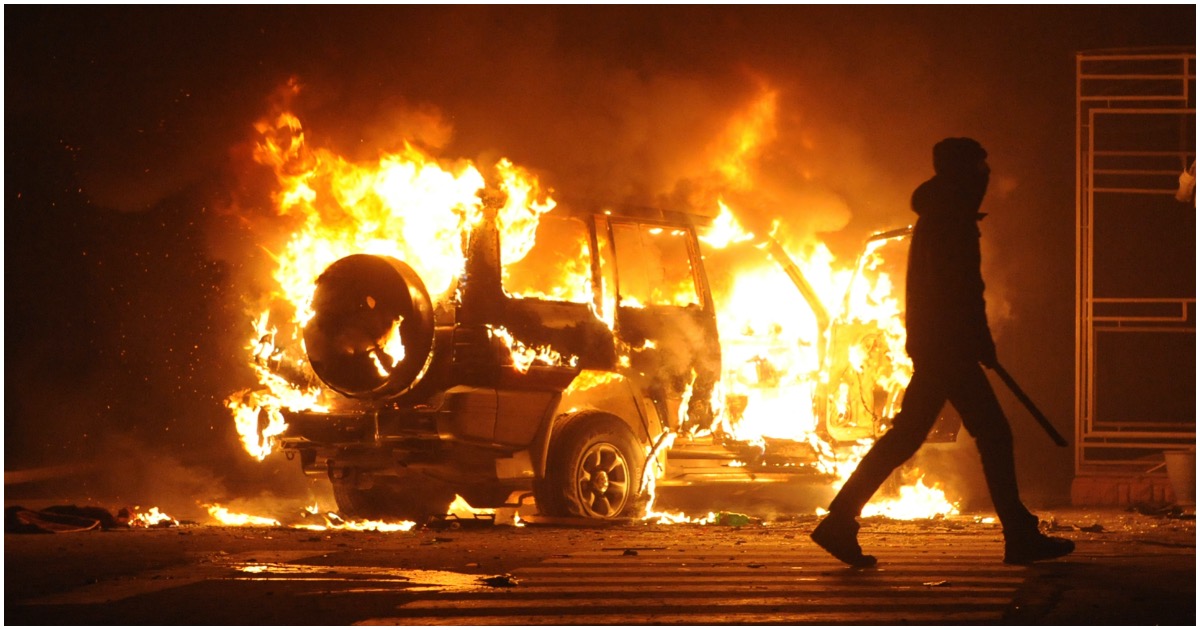 The following article, With Nothing Else to Offer, The Left Is Itching for A Fight — An Opinion Piece, was first published on Flag And Cross.

As we approach mere weeks ‘til the election, Leftists will become more desperate, their tactics more vile, and their utter disdain for America more evident. Any excuse for another round of riots nationwide will do.

In times of turmoil, is toxic, heated rhetoric emanating from the White House justifiable?

“They bring a knife – we bring a gun.”
“I want you to argue with them and get in their face!”
“I don’t want to quell anger. I think people are right to be angry! I’m angry!”
“Hit back twice as hard.”
“We talk to these folks… so I know whose ass to kick.”
“The other party’s victory would mean hand to hand combat.”
“Punish your enemies.”
“I’m itching for a fight.”

Such combative political discourse must be from Donald Trump, right? Except Trump didn’t say any of the above, Barack Obama did, as president. Oh, well… not a big deal, you say? Then your double standard is showing. How can such statements be labeled contentious rhetoric if supposedly uttered by Donald Trump, but not if said by verbatim Barack Obama?

Orchestrated and On Cue

Not coincidentally, the June, July, and August protests and eventual riots were built on the false notion that Trump incited them. The Left – especially George Soros-funded groups – has few other strategies to fire up their base. As he makes one moronic statement after another, there is little enthusiasm for the presidency of Joe Biden, even among many staunch leftists. The uber-liberal New York Times has reported on this. When Biden became his party’s presumptive nominee, the resulting fanfare was non-existent. Bernie Sanders generated enthusiasm; Joe Biden does not. Kamala Harris does not.

Biden’s handful of ‘rallies’ draws tiny numbers; camera coverage and photos are always close-in to mask the size of his minuscule crowds. Meanwhile, the rest of lib-stream press does all it can, non-stop, to make it seem as if Biden is somehow on equal footing with Trump in terms of voter enthusiasm.

Especially when as Trump rises in the polls, especially among minorities, the Left’s fallback strategy is to create havoc. This includes:

3) The fawning press not covering the stories of protesters blocking ambulances, throwing objects, and inciting, in many instances, violence.

To rally the Left, the puppet masters have few alternatives other than fomenting more of the same. Anything else would result in an election doom. Because those on the Right rarely march in the street or protest – most have jobs and responsibilities – it is always easier to generate a Leftist mob. Fewer of them are employed or have any clue about the degree to which they are manipulated.

What About Debating the Issues?

A curious question arises when assessing the Left’s tactics, be they violent, manipulative, or garden-variety political shenanigans. If the truth was on their side, if their proposed policies and platforms had merit, if their plans for America were viable, wouldn’t they be able to intelligently debate issues? Why would they need to resort to anything beyond the power of their policies and principles?

As a case in point, in any upcoming rallies that President Trump might be able to hold, the Left is planning massive campaigns to hassle attendees. How, precisely, does jostling attendees enhance Leftist causes? News of their tactics quickly spread and, presumably, greater numbers of undecided voters will loathe the Left even more than they already did.

Concurrently, no matter what they attempt, the Left cannot increase the number of people who want to attend a Joe Biden rally. So they turn to disruptive behavior to cover for what they cannot logically defend. Because they can’t protest inside of a sealed-off venue, they resort to the next best tactic they can devise: prevent others from attending or from departing gracefully.

Continue reading: With Nothing Else to Offer, The Left Is Itching for A Fight — An Opinion Piece ...