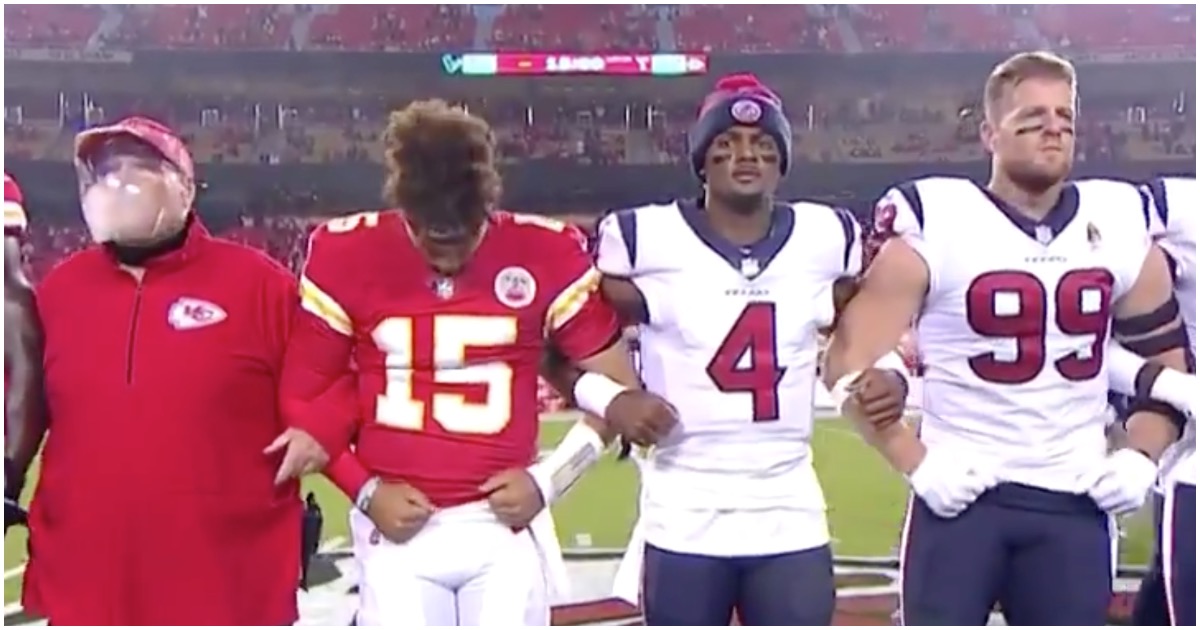 The following article, NFL’s Houston Texans Refuse to Take the Field Until National Anthem Is Finished Playing, was first published on Flag And Cross.

The NFL kicked off its 2020-21 season on Thursday, as the Houston Texans took on the Super Bowl champion Chiefs in Kansas City. As you might expect, the highly-paid athletes decided to take a stand against “social injustice.”

Some players locked arms in unison, while at least one Chiefs player took a knee and raised the black pride fist during the national anthem.

There’s a high likelihood we’ll see more of these antics when the other 30 teams play on Sunday and Monday.

The Houston Texans could not decide, as a team, how to handle the playing of the Star-Spangled Banner and the “Black National Anthem.” Therefore, they decided as a team to remain in the locker room. The Chiefs, however, elected to stay and stood arm-in-arm during the playing of both songs.

#Chiefs staying on the field for the playing of “Lift Every Voice and Sing” which is considered the black national anthem. The #Texans left the field. #NFL pic.twitter.com/mg79t2baF6

A moment of silence dedicated to the ongoing fight for equality in our country. #ItTakesAllOfUs pic.twitter.com/srC0SlnWdh

Well it would be fitting if no one showed up for their games.

Play the National Anthem on a loop and let them stay in their locker-room forever.

Okay, and Americans will be taking a stand against the un-American disrespect from these game players and eventually those multi-million salaries will end….