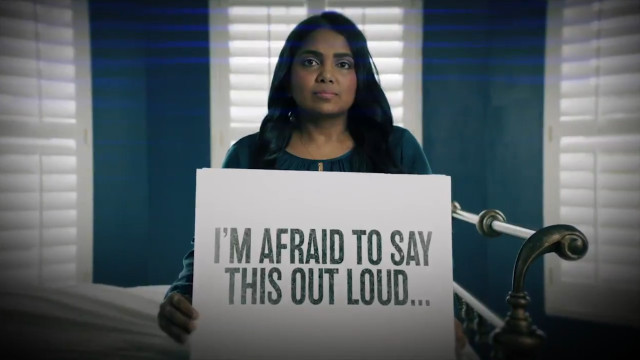 The following article, Trump Supporter Goes After Big Tech When Doctored Video Said She Was Voting For Biden, was first published on Flag And Cross.

Joan Herbert, an ardent Trump supporter, wasn’t the type of person to blast her political views all over social media like so many folks this day and age, but decided to be part of a campaign advertisement to let people know why she is pro-Trump.

Filming the advertisement in a darkened room, the mother of four delivered her message without the use of her actual, physical voice, flipping through cue cards instead of speaking.

One of those cards read, “I’m afraid to say this out loud. I won’t risk my children’s future with Biden.”

However, after the ad started circulating, friends began to call her up confused and understanding which of the actual candidates she was supporting for president.

“Some people called and asked, ‘Which is the real one? Are you really a Biden supporter or a Trump supporter,’” Herbert said.

"I’m afraid to say this out loud…" pic.twitter.com/4OzFPjSWMX

Within hours of her video hitting social media, it had been picked up by Republican Voters Against Trump and edited to replace her cue cards with words attacking the president and his record.

The altered video remains available on Twitter, Facebook, and YouTube despite Herbert’s efforts to have it removed. Its makers insist it is clearly a parody and, therefore, not designed to mislead.

Hey @realDonaldTrump, we fixed your ad for you. pic.twitter.com/RRZjdjrJOx

As a result of this video, there is now a huge dispute about how social media companies should handle manipulated footage like this so that the original message of the posters is kept intact and ensures they are protected against misinformation, while also protecting the right to post satire and parodies.

However, President Trump’s campaign is saying the rules here are not being applied fairly and that Herbert is a victim of the anti-conservative bias of certain social media companies in Silicon Valley.

“Joan Herbert embraced her First Amendment right to express her views in support of President Trump, and in return, the left exploited that expression — and the arbitrary ‘rules’ created by social media companies aren’t helping her fix the issue,” spokeswoman Samantha Zager said of the incident.

Officials have gone on to point out how it seems the president’s social media accounts are held to higher standards and subjected to stricter rules than others. For example, when he tweeted out a parody video featuring one toddler chasing after another one with Fake CNN chyrons that said, “Terrified toddler runs from racist baby” and “Racist baby probably a Trump voter,” the content was slapped witha “modified” label on Twitter.

Shortly thereafter it was removed entirely by the company.

Efforts to have the video removed required complicated proof that she was the copyright holder, something she did not have.

Twitter told her that “only the copyright owner or a person authorized to act on their behalf” could apply to have the video removed. The company did not respond to a request for further comment.

All that’s being asked for here is that Trump and his supporters receive the same kind of protection that Big Tech companies provide for those who are left-wing in their politics. In other words, fairness and consistency. That doesn’t seem like a very tall order, but for the left, apparently, it is.

That might have something to do with the fact that many of these companies wish to help the Democratic Party by silencing the voices of the opposition.

Aw, dems cannot accomplish anything on their own, so they try to use the efforts of others. Nothing new here.

Remember the successful lawsuits of Nick Sandmann? SUE TF out of ’em…!

I agree she should sue “Republican Voters Against Trump” for slander (altering statements), and libel (publishing those statements), since it is clear from watching their version of the video that nothing in their video indicates it is a parody, and in fact the ending political candidate disclosure statement makes it clear what it is, a political advertisement for Biden paid for by the “Republican Voters Against Trump”. While libel and slander cases are difficult, I believe this video is fairly outside of parody since there is nothing in the stand alone video to indicate it as parody. In addition, if… Read more »