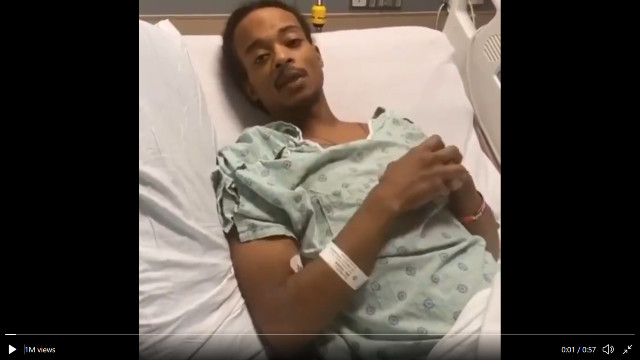 Over the weekend, an attorney representing Jacob Blake, the man shot seven times by police officers in the city of Kenosha, Wisconsin, shared a video message from Blake from his hospital bed. In it, Blake encourages people to “change” their “lives,” putting a strong emphasis on the pain he’s experienced after being shot last month during an attempted arrest.

“I just wanna say, man, to all the young cats out there, and even the older ones, older than me, there’s a lot more life to live out here, man,” Blake says in the video.

“Your life,” he went on, giving a quick snap of the fingers, “and not only just your life, your legs — something that you need to move around and to move forward in life — can be taken from you like this, man.”

“And I promise you, the type of s*** that you’ll go through — staples, I got staples in my back, staples in my damn stomach — you do not wanna have to deal with this s***, man. Twenty-four hours, every 24 hours, it’s pain, it’s nothing but pain. It hurts to breathe, it hurts to sleep, it hurts to move from side to side, it hurts to eat,” he added.

“Please, I’m telling you, change your lives, out there” Blake pleaded. “We can stick together, make some money, make everything easier for our people out here, man, because it’s so much time that has been wasted.”

As a result of the shooting, Blake is reportedly now paralyzed from the waist down.

#JacobBlake released this powerful video message from his hospital bed today, reminding everyone just how precious life is. #JusticeForJacobBlake pic.twitter.com/87CYlgPDBj

It’s tragic this man’s life is now forever altered for the worse, but if we are being honest, there’s no one to blame but himself. He could have prevented this whole thing had he simply complied with the police and not attempted to reach for some kind of weapon in his car.

We can blame the police for this incident as everyone else is doing, or we can accept that Blake played a significant role in what happened to him. It’s not victim blaming. It’s simply the truth. Personal responsibility is severely lacking in our world today.

Maybe this man’s life will change for the good now that he has time to think about his life before this incident that has taken away his ability to walk or feel from the waist down. God has a plan for his life or he would not still be here. Let’s hope this man finds what it is.

My goodness! Maybe he actually learned something!