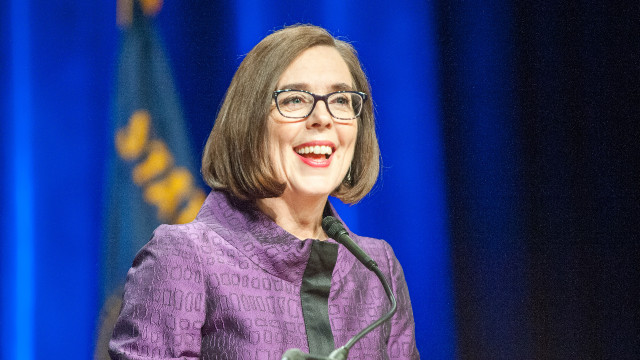 The following article, Oregon Governor Releases A Plan To End Violence; Police, Sheriffs Rip Her, was first published on Flag And Cross.

Oregon Gov. Kate Brown, a Democrat, has finally decided to get off her butt and do something about the violence shredding the city of Portland to pieces over the last three months.

The “plan,” according to Brown, was to “protect free speech and end violence in Portland” after a Trump supporter was shot and killed over the weekend in the city at the hands of an Antifa terrorist.

“Brown said she will be asking sheriff’s deputies from both Clackamas and Washington county, as well as officers from Gresham, to support Portland Police in keeping the peace,” KATU News reported. “The governor is convening a community forum on racial justice and police reform, which will include Black protest organizers and community leaders, as well as Portland Mayor Ted Wheeler.”

However, due to the weak support that Oregon Democrats have given to law enforcement officials, sheriffs told Brown that they would not be participating in her plan.

Clackamas Sheriff Craig Roberts blasted Brown over her plan claiming that his department would participate, saying that “it’s about changing policy not adding resources.”

Kellee Azar, reporter with KATU News, tweeted out that Roberts said he “will not send deputies to Portland.”

Strong statement from @ClackCoSheriff Roberts who says they will not send deputies to Portland after @OregonGovBrown released a plan saying they would.

Instead, he says "the criminal justice system will need to do its part and hold offenders accountable."#LiveOnK2 pic.twitter.com/DETlaPzTCN

Washington County Sheriff Pat Garrett also said that he wouldn’t be sending any deputies to assist:

The Oregon Association Chiefs of Police also declined to be involved, saying, “Over the weekend, members of our associations were approached to assist with policing in the City of Portland. Unfortunately, due to the lack of support for public safety operations, the associated liability to agencies who would be assisting in Portland and the lack of accountability for those arrested committing criminal acts, we cannot dedicate our limited resources away from the communities we serve.”

The Democratic Party leadership in this state and the city of Portland have made this mess. If they want help, they are going to have to turn to President Trump, who stands ready and willing to deploy National Guard troops to help quell the violence and rioting.

Mayor Ted Wheeler has made it clear he wants to put his own political career ahead of the people of his city and has declined this offer of assistance in order to look like a good party stooge.

Portland made their bed. Now they have to lay in it.

When State Government elected officials IGNORE their responsibilities in pursuit of their political objectives – (which have BLOWN UP IN THEIR FACES), they “fuel the fires”. Then when the fires are beyond containment, they jump into “act”. Of course, that action is seminars, meetings and more meetings, TALK, TALK, TALK. Gov. Brown is such a clown, along with the clueless key Antifa/BLM motivator and supporter Portland Mayor Ted Wheeler!

kudos to the Agency’s that refuse to put themselves in harms way due to the stupidity of its mayors and governors who coddle Domestic terrorists they shpuld have stepped on the necks of these groups the first sign of violence now 3 month later and million of $$ lost in revenue, you have the nerve to request help from other towns, HELL NO! call in the guard and start growing some balls and start arresting the bad apples and work for your good citizens.

Gotta plan B? Here’s an plan no one has thought of, ask President Trump to send FBI and National guard in to bring back law and order, arrest and prosecute the rioters and any protesters mingling with rioters. Wait, maybe Trump has already suggested that.

The problem starts with the ‘voters’ electing a liberal foolish dem woman into power. The question is, will those same voters continue voting for the same?