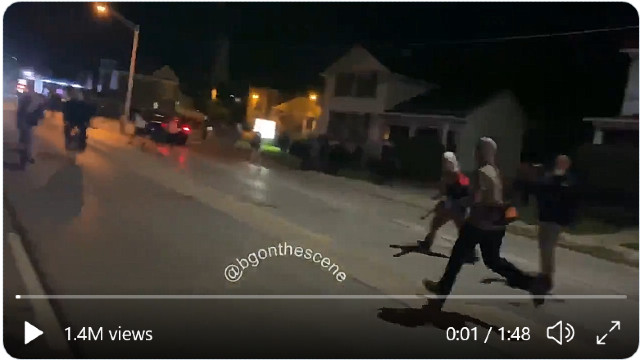 Police in Kenosha, Wisconsin are currently looking for a suspect captured on video who is armed with a long gun after a shooting took place late Tuesday evening, which left two individuals dead and a third wounded.

The violence broke out during yet another night of civil unrest in the city following the shooting of Jacob Blake by police officers. Blake is still alive, though partially paralyzed.

Here’s what we know via Fox News:

Officers responded at about 11:45 p.m. Tuesday to reports of shots fired and multiple gunshot victims near 63rd Street and Sheridan Road. Two people were killed, and a third was hospitalized with serious, but not life-threatening injuries, the Kenosha Police Department said in a statement.

WARNING: VIDEO BELOW IS GRAPHIC

(Warning, Graphic/Violent)
A crowd chases a suspected shooter down in Kenosha. He trips and falls, then turns with the gun and fires several times. Shots can be heard fired elsewhere as well, corroborating reports of multiple shooters tonight #Kenosha #KenoshaRiots pic.twitter.com/qqsYWmngFW

Investigators were looking into whether the shooting unfolded as a result of a conflict that broke out between demonstrators and “self-styled militias guarding a gas station,” Kenosha County Sheriff David Beth told the New York Times.

Videos on social media showed a chaotic scene after nightfall, as crowds seemed to chase a man carrying a rifle down the street, before eventually knocking him to the ground and trying to grab his weapon, Reuters reported. A bloodied man was seen with what appeared to be a serious arm wound. Another video showed a man with a head injury as crowds gathered around him to treat him.

Wisconsin Gov. Tony Evers, a Democrat, called for folks to calm down on Tuesday, which obviously didn’t work, while also declaring a state of emergency and doubling the presence of National Guard troops from 125 to 250.

Listen, folks. There’s more of this kind of thing to come if real, decisive action isn’t taken to shut down these riots. People are getting fed up. We’ve had to deal with this pandemic all year long, and now this civil unrest and the destruction of private property is just too much.

Violence isn’t a solution. But people are getting so tense and worked up over the lack of action being taken to protect local communities that something is going to get done, no matter how bloody it might turn out to be.

We need to avoid that kind of reaction. Lawful officials need to stop this madness before more people are hurt or killed. This is not the way things should be.