The following article, The Addiction Brain Disease – The Great American Scam!, was first published on Flag And Cross.

Over the course of the last 25 years, NIDA (National Institute on Drug Abuse) and similar institutions (both public and private) have been promoting the addiction brain disease as the dominant explanation for problematic substance use habits, what we commonly call addiction. The studies conducted by these organizations are filled with colorful images of brain scans, scientific sounding ideas and theories (usually presented as fact) and the fundamental premise that human biology explains all of our behavior. This is, by and large, wrong. The addiction brain disease system muddies the waters of fact with this kind of self-serving fiction. It keeps the treatment industry flush with “sick” patients and funding that flows to the government agencies that regulate the industry. Treatment for addiction and its sister regulatory agencies are big business in America, and the brain disease is the “science” used to justify such industrial extravagance.

I realize this all sounds a bit like I’m describing a doomsday conspiracy. I’m not. Know this – fundamentally, the drug and alcohol rehab industry, and the regulatory “science” agencies that back it, regardless of how ineffective and bloated, carry the goal of helping people who desperately are in need. The vast majority of people involved in this endeavor think they are doing a good job. Having known many of them myself, they are some of the best people I know. (There are, of course, the bad actors too.) However, most involved know something is amiss in the rehab culture, but they get distracted from finding the truth by the nearly century long promotion of a false premise that has remained the shiny object of the industry – that addiction disease concept.

The system of treating addiction via the disease model goes back 80 years both as an endeavor to save lives and as a business model that unfortunately was lost when it began. The foundation of the cultural revolution known as the addiction disease model has been faulty from its very beginnings, long before the systems of help (i.e. rehabs, treatment centers, and such) had been founded and further developed. All these outgrowths of the original disease concept we see today: the rehab systems, the recovery-centered cultures across the globe, the nearly universal 12 step activism, and the “enlightened” brain disease theory, are a result of a seed idea – the disease of addiction coupled with the loss of control myth – that got its foothold in American culture in the early 1900’s temperance movement. These ideas were ineffective in helping the substance user then, and yet for many social and financial reasons it continued to grow and now flourishes in our society. Today, regardless of the fact that success rates for those who go to such disease-based treatment is lower than those who don’t, more than 36 billion dollars per year is spent in treating “addicts” and “alcoholics” with disease centered methods. Rehab is a massive revenue generator, and that revenue needs something that sounds akin to science in order to justify it. The more our society descends into higher and higher overdose rates, the more we’ve doubled down on the methods that have failed us in the past. Enter the next phase of the false disease ideal – The Addiction Brain Disease theory…

The following is a brief excerpt from the groundbreaking book, The Freedom Model for Addictions, Escape the Treatment and Recovery Trap that debunks the brain disease theory:

“When the brain disease proponents shift out of their emotional appeals for a moment, and focus on selling their model on the basis of actual evidence, the logic is equally lacking. They churn out a lot of neuroscience jargon, such as talk about the midbrain, prefrontal cortex, mesolimbic reward system, neurotransmitters, metabolic activity, and more. They show colorful brain scans that they claim prove that the substance user’s brain or free will has been “hijacked.” They talk about how the exposure to substances changes the brain in lasting ways. They make dramatic comparisons to well known indisputable diseases. Yet the one thing they never truly do is to connect the dots in a logical way. Their arguments are incomplete, rest on a number of shaky premises, and defy well-established facts from other branches of science, such as epidemiology and behavioral research.

“Addiction is defined as a chronic relapsing brain disease that is characterized by compulsive drug seeking and use, despite harmful consequences. It is considered a brain disease because drugs change the brain – they change its structure and how it works. These brain changes can be long lasting, and can lead to the harmful behaviors seen in people who abuse drugs.”
(NIDA, 2014)

So, boiled down, the basic claim is that substance use changes the brain, and then those brain changes cause the continued substance use. NIDA offers scans of “addicted brains” to make their case to the public in the same paper: 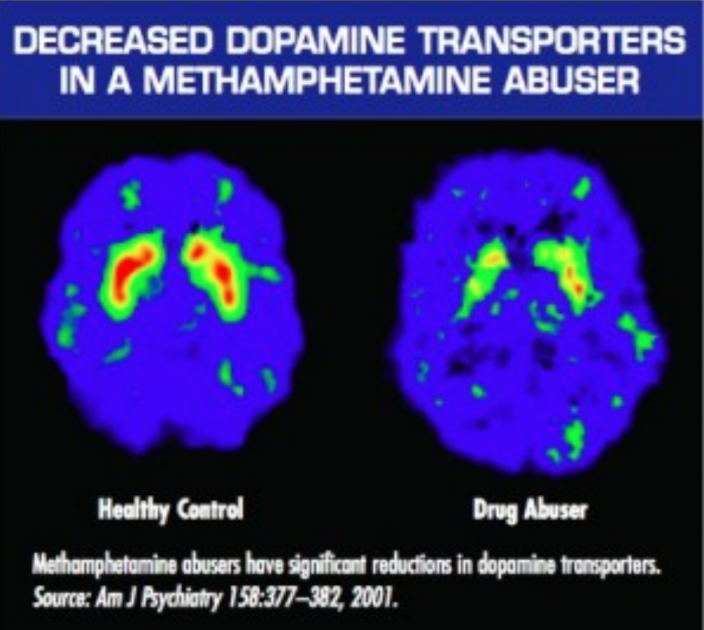 The average person sees the brain scans that NIDA shows, and just accepts the conclusion that follows – “case closed – that’s the evidence of disease!” This uncritical reaction is in fact codified in research which found that a majority of people will believe nonsensical explanations of psychological phenomena as long as the phrase “brain scans indicate” is inserted into it. (Weisberg et al 2008). It sounds scientific, it looks scientific, and so we don’t think too much about it, and just accept it. Let’s not fall into that trap here; let’s not shut down our critical thinking in the face of something we think the top scientists must have figured out. Instead, let’s think about this “evidence” by starting first with a great definition of the term:

“Evidence is fact that discriminates between one theory and another. Facts do not “speak for themselves.” They speak for or against competing theories. Facts divorced from theory or visions are mere isolated curiosities.” (Sowell, p. 6)

Does the evidence offered support the brain disease theory? The brain scans are interesting. They certainly must be able to tell us something, yet by themselves they do not prove that addiction is a brain disease. They actually don’t prove much of anything with respect to substance use. While there is evidence demonstrating that some changes to the brain do occur with continued repetitious use of substances, it takes more than that to prove the theory that these brain changes “can lead to the involuntary, harmful behaviors seen in people who abuse drugs.” This is a very serious claim of causation, and so to reach the conclusion that these changes in the brain cause heavy substance use and rob the user of free will, we need something that shows that people are physically unable to stop without medical intervention once these alleged brain changes have occurred. We need scans to show that the brain is changed yet again before people stop using substances.

The brain scans shown above are from a study of heavy methamphetamine users and have been used in many media and public presentations of the brain disease model of addiction. Later studies on the same group of subjects showed that with sustained abstinence, their brains changed back to look more like the brains of people who had never used methamphetamine problematically. This begs the question; did their brains change back before they stopped using or after they stopped using? For their assertions to hold water, you would have to see changes to the brain prior to stopping usage, not as a result of it. 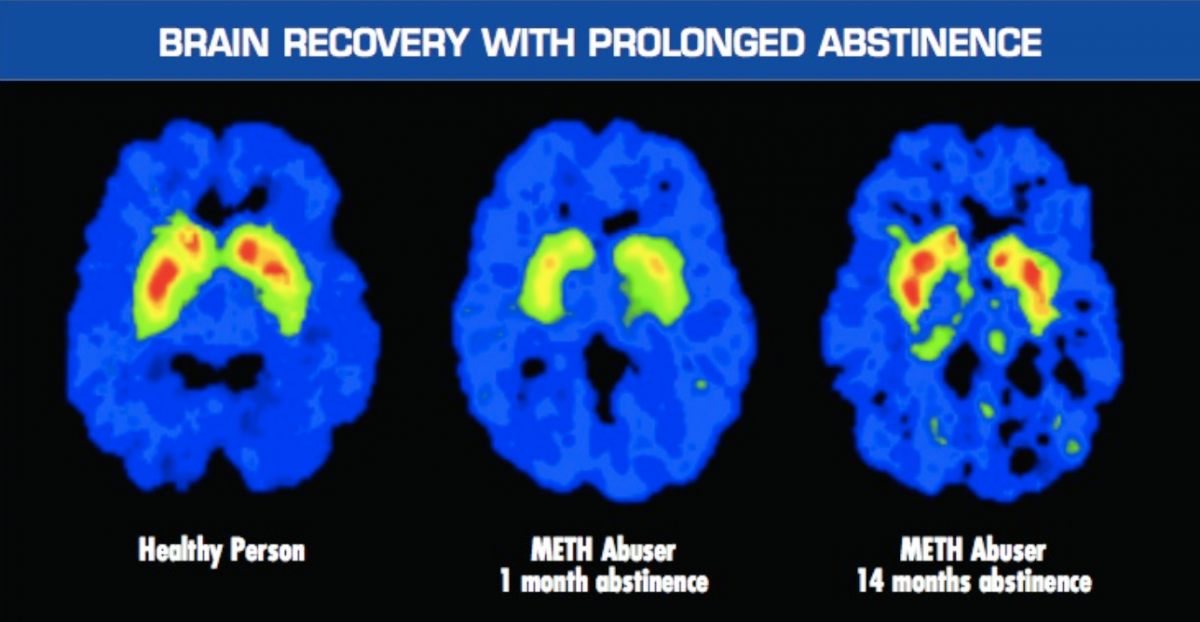 Think about this, because this single point is enough to tear apart the brain disease model as it is regularly presented. If we are to believe that the brain state shown in the first scan of figure 1 causes “addicts” to use substances “compulsively” (without any choice in the matter, and unstoppably), then those users literally would not stop until their brain is altered to once again look like a “healthy brain.” However, they do stop, even while having a supposedly “unhealthy” and “addicted” brain, as shown in the scans of figure 2. The “powerless addicts” in this very study did just that; they stopped while they were in the proposed diseased and powerless state.

Furthermore, they did not have a scalpel put into their brain to surgically alter it, nor were there any medications used at the time to alter brain activity related to meth use. In fact, the subjects of these studies were gathered from run of the mill treatment programs, where the treatment likely consisted of group counseling and 12-Step meetings, among other non-medical, talk based treatment. Talking doesn’t remove tumors. Talking doesn’t restore dopamine function to Parkinson’s patients. Talking doesn’t eradicate infections or change insulin levels. Talking doesn’t make a paraplegic’s legs work. But somehow talking made the “diseased” subject have the ability to stop while they are still supposedly diseased? How can this be when the disease proponent’s main criterion for the disease is that the subject cannot stop while in this diseased state? We can clearly see that their rhetoric backfires and exposes the ruse.

Conversations aren’t medical treatment. They are human interactions in which ideas are communicated. Ideas. Those ideas may persuade people to behave differently and to make different choices, but the premise of the brain disease model of addiction is that addicts’ brains prohibit them from making different choices about drug and alcohol use. Yet here we see in NIDA’s main piece of evidence for their brain disease model of addiction that “addicts” of what we’re told is one of the most “addictive” drugs, do make different choices even while their brain is in an ‘unhealthy/addicted’ state.

This most recent brain disease model holds no more water than its previous disease ideals used in the past to convince people they were powerless to stop using substances. While a detailed treatise on the roots of the disease model is a topic for another article, it is important to know that there was never any valid science that was ever used to prove its existence. Knowing this is important. Knowing that the public has been duped into believing we, humans, are automatons that are at the mercy of our drug induced biology is the first step away from being a minion of that system of thought. The disease theory of addiction is not science, and never has been. Rather, it is a religion – the religion of addiction and its supposed causes. Beliefs are powerful things, and beliefs based in myth usually end tragically while facts naturally drive us closer to solutions. It is time to debunk the disease charade in its totality so we can get on with helping people rekindle the knowledge of their free will and thusly move past their addictions with ease.