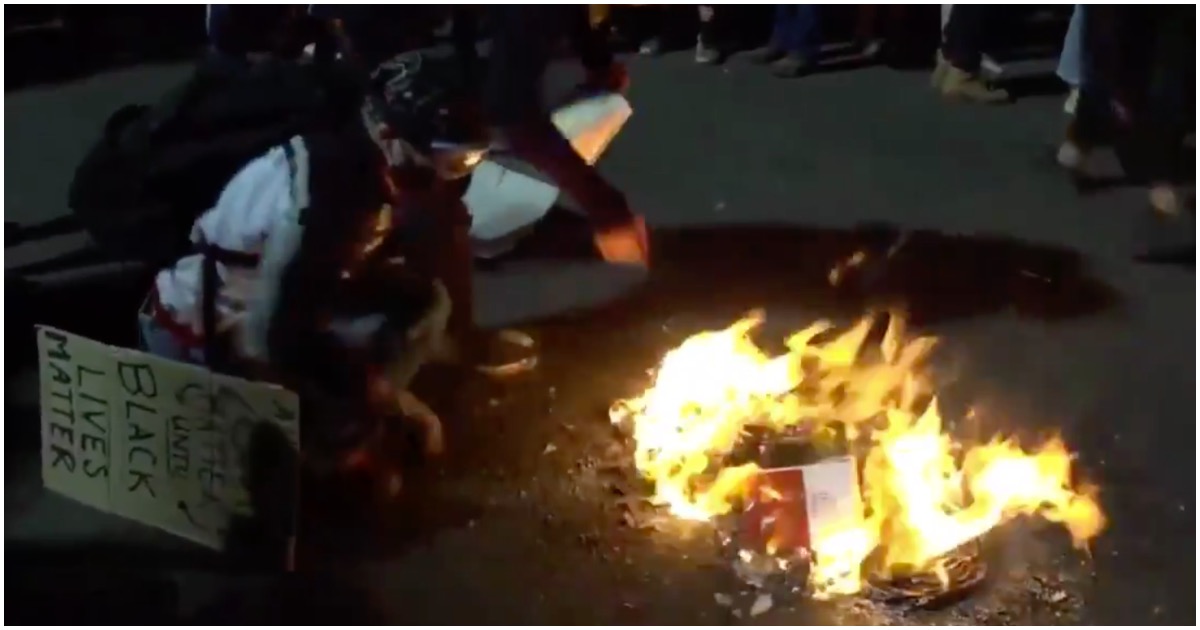 The following article, ‘Left-Wing Activists’ Drop Bibles & Flags On the Ground, Proceed to Light Them On Fire (Video), was first published on Flag And Cross.

So, protesting against “police brutality” now includes burning Bibles, huh? That’s a new one. It’s almost as if these radical liberals have no clue what they’re fighting against.

Remember, the goal of these goons is complete “societal breakdown.” They want America, and everything she stands for, to die.

Videos are still pouring out of Portland and Seattle where the riots continue with no major effort by the mayors or the governor to stop them. There has been a slight increase in the ability of cops to do their job, after President Trump set a timetable for the National Guard to come in and take care of business, but it isn’t even close to enough.

Left-wing activists bring a stack of Bibles to burn in front of the federal courthouse in Portland. pic.twitter.com/lYWY0x8n8P

I don’t know what burning the Bible has to do with protesting against police brutality.

Do not be under the illusion that these protests and riots are anything but an attempt to dismantle all of Western Civilization and upend centuries of tradition and freedom of religion.

THATS NADLER RIGHTS TO BELIEVE ITS A MYTH.

About 300 years ago my ancestors were unhappy with the country they were in and they came to the new country named America & formed the USA. Appears that these ‘left wing activists’ are now unhappy with the USA so they should leave and start their OWN country and make the rules they wish for (communism, socialist, or whatever they wish to call it) and leave America to us that appreciate it and being free and with OUR constitution.