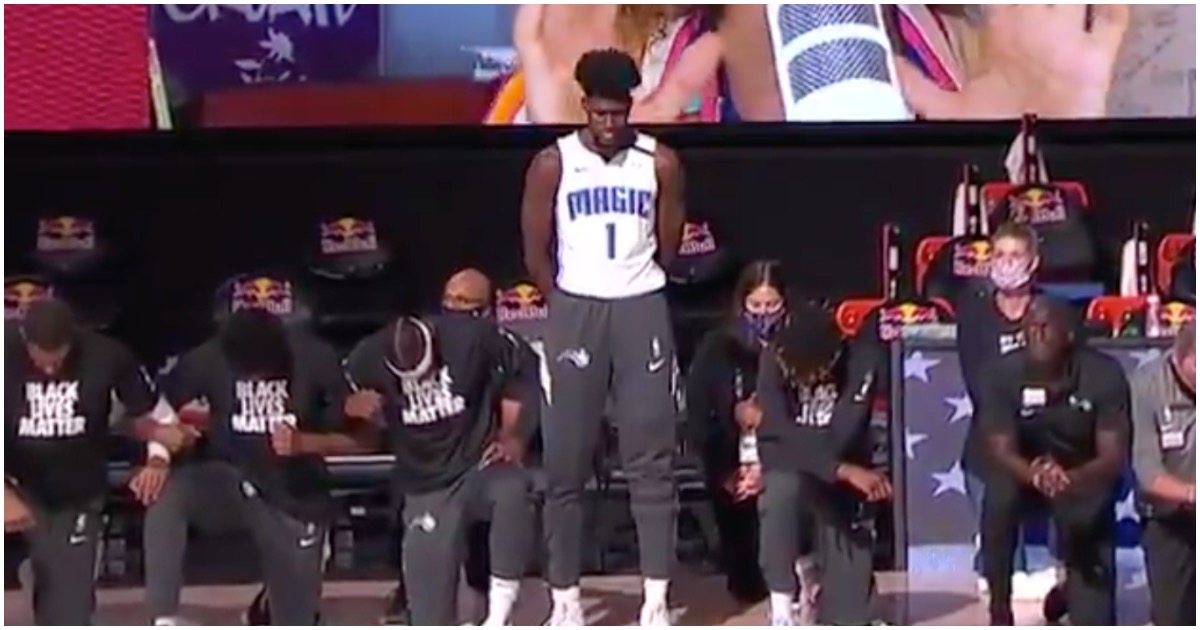 The following article, Only One NBA Player Stands for the National Anthem — ‘We All Fall Short of God’s Glory’, was first published on Flag And Cross.

During the NBA’s return on Thursday evening, every player and coach from the Los Angeles Lakers, Los Angeles Clippers, New Orleans Pelicans, and Utah Jazz, took a knee during the national anthem.

Referees and everybody else in the building also appeared to take a knee. Heck, LeBron James even decided to go rogue and raise the black power fist.

On Friday, one man took a stand by deciding not to kneel.

Isaac, who became an ordained minister in March, discussed his faith several times while describing why he made his decision.

Isaac added, “I feel like the Bible tells us we all fall short of God’s glory and at the end of the day whoever will humble themselves and seek God and repent of their sins that we could see it in a different light — see our mistakes and people’s mistakes in a different light, see people’s evil in a different light. And that it would help bring us closer together and get past anything that’s on the surface that doesn’t really deal with the hearts of men and women.”

We’ve said people should be able to exercise their right to kneel during the National Anthem and we should listen & hear their reasons why. When Jonathan Isaac chooses to stand we should do the same. He explained his reasons very clearly-he wants to stand in prayer. I say Amen!

We worked way too hard defending Kaepernick's right to kneel to turn around and not respect Jonathan Isaac's right to stand.

I'll say the same thing I said to people mad at Kaep.

You may not like it but it is his right.

Continue reading: Only One NBA Player Stands for the National Anthem — ‘We All Fall Short of God’s Glory’ ...

All a bunch of traitorous cowards! Anyone who kneels is weak and disgusting