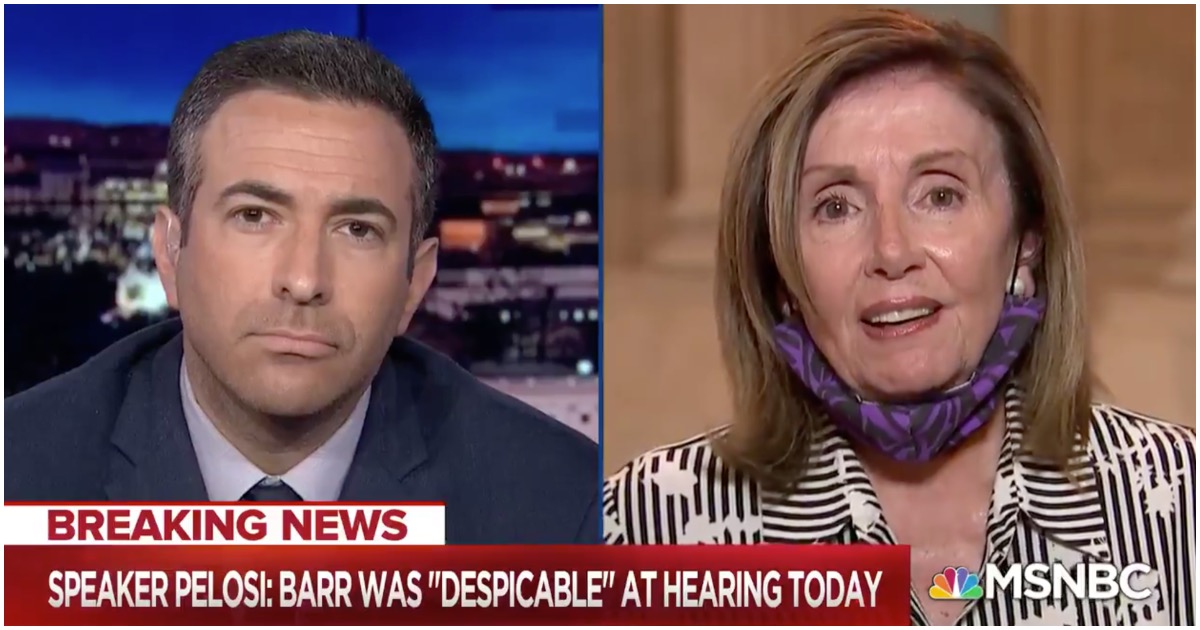 The following article, Pelosi: AG Bill Barr Is Just ‘A Blob’ — He’s ‘A Henchman for the President of the United States’, was first published on Flag And Cross.

It’s takes a lot of nerve to to say the things Nancy Pelosi has said over the years. But she knows she’ll get away with whatever because she has the mainstream media on her side.

Rather than acknowledge all the wrongdoings of the Obama administration like a moral person, the Speaker of the House decided to attack the sitting attorney general for telling the truth at most his recent Congressional testimony.

It’s as if she has no recollection of the atrocities committed under AG’s Eric Holder and Loretta Lynch.

This woman needs to be voted out of office, San Francisco. Get it done.

WATCH: @SpeakerPelosi likens AG Barr to a "blob," arguing he has acted more like a "henchman" for Trump than the Attorney General of the United States. pic.twitter.com/qEg7K6lhZg

— The Beat with Ari Melber on MSNBC

From Greg Gutfeld at Fox News:

In a year when we asked millions of Americans to unite and fight a novel coronavirus, Nancy Pelosi’s instinct is to protect the lawyers by vowing to block liability protections for employers in the next coronavirus relief package.

Unless you’ve been refrigerated like delicious mint chocolate chip for seven months, you’ve seen an amazing commitment to ensure safety. So let’s not assume people who want to get back to work are irresponsible. They’re making adult decisions, struggling to save their livelihoods.

Liability protection exists to allow civilization enough time to restart, before the lawyers carve up the carcass. And we get it. If a business doesn’t make sure it’s safe for employees, it’s not going to be safe for customers. Any idiot can figure it out.

Pelosi shouts “NO” 11 times after she’s asked to put vote-by-mail in a separate bill from economic relief: pic.twitter.com/0WyOVzZrUk

Continue reading: Pelosi: AG Bill Barr Is Just ‘A Blob’ — He’s ‘A Henchman for the President of the United States’ ...

“Henchman”? Remember when obama’s terrible 8 years when his attorney generals were joined at the hip with obama. And then his AG collided with Bill Clinton to have obama’s choice for being the next president to be prevented from prosecution for corruption & lying…..Was okay with dems for obama to choose his ‘cabinet’ but not for a republican president to do the same????