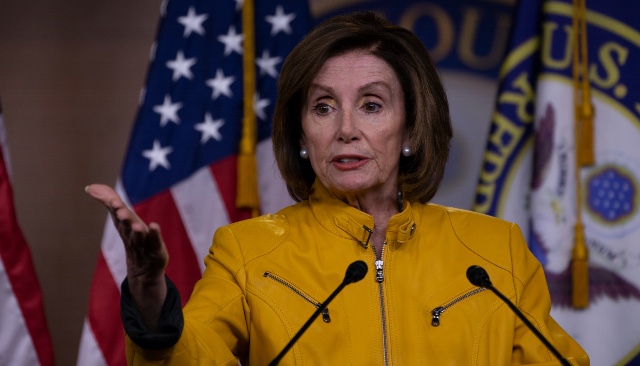 The following article, Speaker Pelosi Calls Republicans To Her Office For Aid Package Negotiations, was first published on Flag And Cross.

Speaker of the House Nancy Pelosi summoned House Republicans to join her in her office “within half an hour” of the official release of the GOP’s coronavirus aid package proposal in order to sit down and negotiate a supposedly bipartisan compromise on the deal.

In other words, Pelosi wants to see how many items from her socialist wishlist she can push through with the approval of Republican members of the House as she holds aid for Americans in need as a political hostage.

“I call upon the Republican leadership of the House and Senate and representatives of the President to come to the Speaker’s Office and join Leader Schumer and me within a half an hour of releasing their plan today to negotiate and get the job done,” the California Democrat said in a statement Monday. “If Republicans care about working families, this won’t take long. Time is running out. Congress cannot go home without an agreement.”

But Democrats are playing up a potential divide within the GOP over the spending plan and argue the Senate should have passed a $3 trillion coronavirus package that House Democrats passed in May.

The current funds for the expanded federal unemployment program are about to run dry. Members of the GOP are proposing an extension of these benefits, but reduced from the current $600 a week amount being handed out now. The Republican Party is also aiming to send out another round of stimulus money which would target individuals and families earning less than $40,000, which would benefit far fewer folks than the current $75,000 in the Democratic plan.

All of this is just getting so out of hand. We need to finally accept the fact the coronavirus is going to be among us for a long, long time. It’s not going anywhere. People need to get back to work. Businesses need to be open and without restrictions. That’s the only way forward.