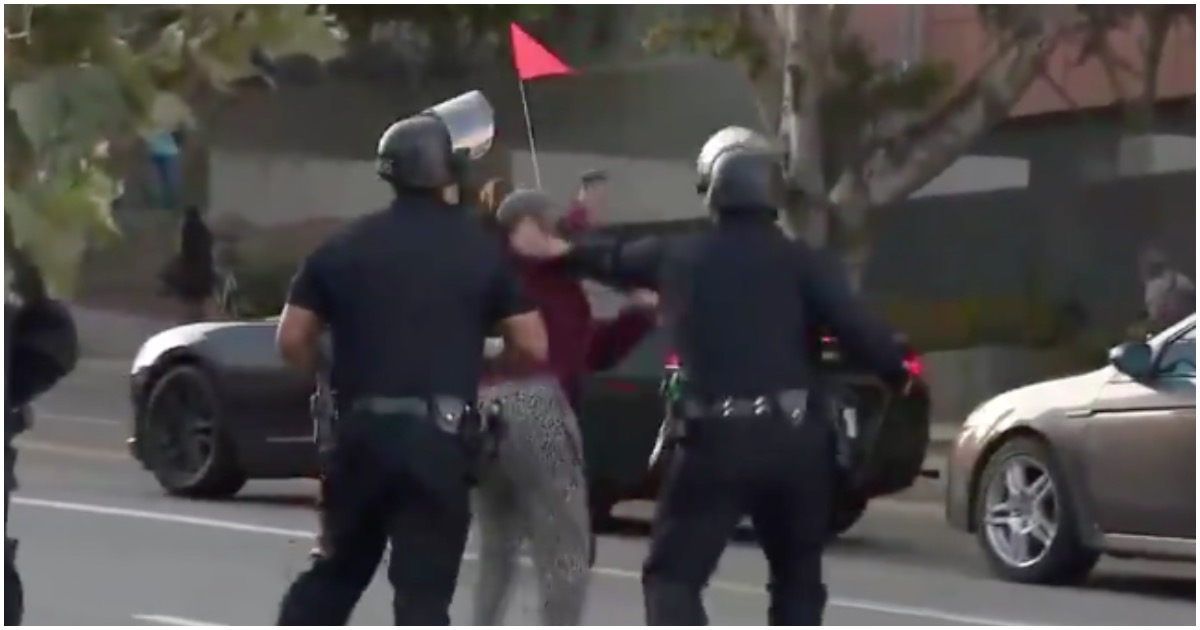 It’s pretty insane to think that “peaceful protesters” have no problem with physically attacking innocent men and women simply because they vote differently. And if you’re a cop, no matter how good you are at your job – even if you’ve never had a complaint against you – look out!

What happened on Sunday in Los Angeles is a disgrace. And still, Pelosi, Biden, Obama, Schiff, Waters, and the rest of ’em are silent.

Los Angeles police on Sunday said they made four arrests after a clash between civilians and police followed “peaceful” protests in downtown L.A. the day before.

According to LAPD, some people within a large crowd of protesters started to “direct physical assaults on officers” and vandalized property just after 5:30 p.m. Saturday. Protesters also walked onto the 101 Freeway.

Authorities arrested three people for alleged battery on a police officer and one person, who allegedly had a machete, on suspicion of causing a disturbance, LAPD said.

This shit is totally out of control. This is not protesting, this a flat out assault on law enforcement. Officers should be given the ok to defend themselves by ANY MEANS necessary.
It would not take but one or two…. pic.twitter.com/maifFA3rp6

China, Russia, and, well, pretty much every country in the world has to be laughing at the US right now. And liberals love it.

If this were you or I we’d have already been arrested and charged. This has got to STOP. This is no longer a ‘peaceful’ protest, it is now an insurrection and a civil war. Use whatever means to stop this now.

Mr. President , how much longer will these protesters be allowed to disrupt our lives ? If federal agents aren’t able to go in allow us to take care of the situation with immunity for our actions .