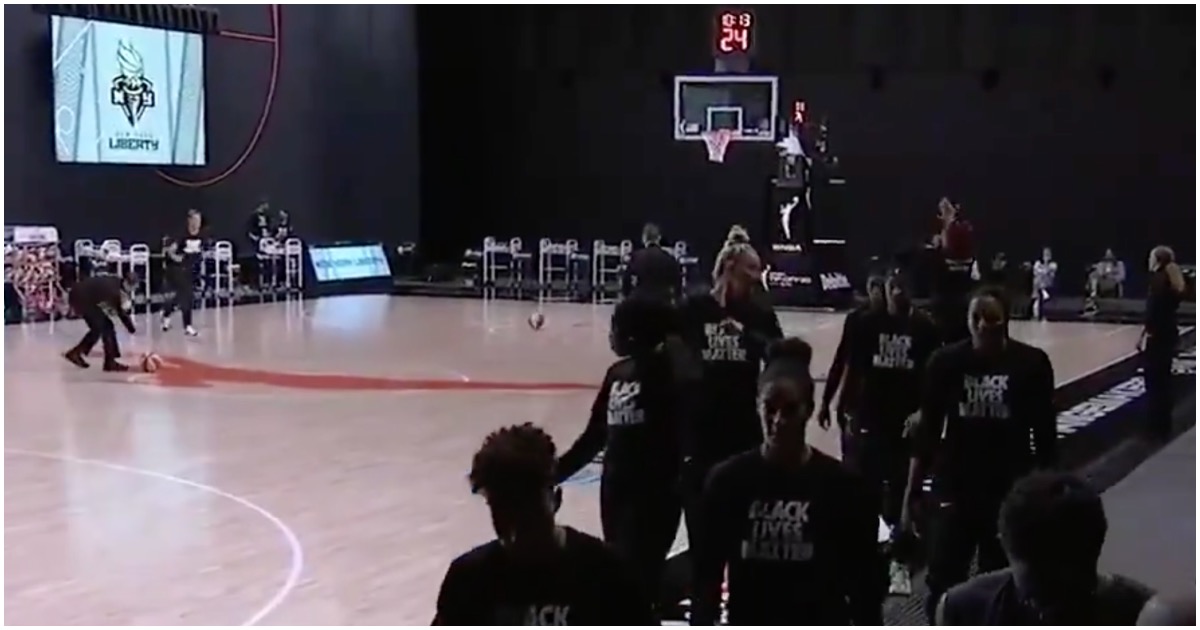 The following article, WATCH: Women’s Basketball Teams Walk Off the Court As National Anthem Is Played, was first published on Flag And Cross.

The disrespect is out of control. Colin Kaepernick may have been the first big name athlete to get recognition for turning his back on Old Glory, but now it is everywhere.

The “Black Lives Matter” movement has taken over. What’s worse is that we can’t watch sports anymore without being reminded about politics.

Also, quick poll: have you ever watched a WNBA game?

Players on the New York Liberty and Seattle Storm WNBA teams walked off the court during the U.S. national anthem in a social justice protest before their game on Saturday.

The WNBA players said in remarks before the game that their demonstration was over the death of Breonna Taylor, a 26-year-old black woman killed in March after police forced their way into her home while executing a no-knock warrant. Liberty player Layshia Clarendon stood at mid-court with Storm’s Breanna Stewart before the start of the game at IMG Academy in Bradenton, Florida, and dedicated the season to Taylor, according to the New York Post.

As the national anthem was played, the @nyliberty and @seattlestorm walked off the floor as part of the social justice initiative. pic.twitter.com/VihH5X3Yzh

Dodgers star Mookie Betts takes a knee during the national anthem before his first game in LA pic.twitter.com/JeFFnE6HZS

Like the Yankees and Nationals, the Dodgers and Giants took a knee during a moment of silence before the anthem. pic.twitter.com/l9vXpJMNIS

Mookie Betts is the only Dodger kneeling during the anthem. Cody Bellinger has his hand on his shoulder. pic.twitter.com/6DIOzAdtLF

As part of his contract, Mookie Betts will donate 100K each year to the Dodgers charity.

A bunch of Giants players and coaches kneeled for the anthem. Brandon Crawford put his hands on the shoulders of Jaylin Davis and Antoan Richardson: pic.twitter.com/2XsIg8oFjw

Should have called the game off as soon as the players disrespected America. And any player doing his/her kneeling should not be playing in that game.

Before the woke, rona nonsense there’s NO WAY the WNBA was making money.

NO ONE watches that boring bs.